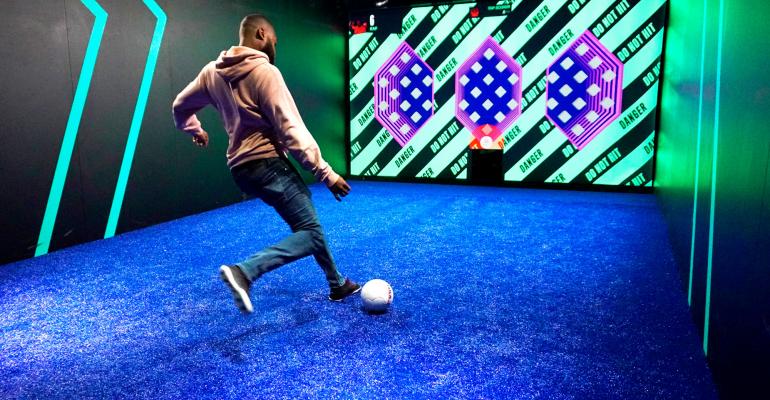 In addition to its Social concepts, the company also operates 15 Toca Sport indoor soccer training centers (including one in the DFW area) that help young athletes develop their skills.
Trends>New Restaurant Concepts

Toca Social to bring soccer-themed dining to United States, starting with Dallas in 2023

The lines between dining and entertainment have blurred. Not long ago, a couple pool tables and dart boards were enough to make an impact, but over the past couple of decades, concepts have sprung up that join full-service restaurants with bowling alleys, golf simulators and other interactive experiences.

Dallas has shown an affinity for these game-focused bars and restaurants. Top Golf counts four locations in the Dallas-Fort Worth area. The Puttery, a mini golf concept backed by PGA pro Rory McIlroy, opened last year. There’s also Electric Shuffle, a tech-driven shuffleboard bar with custom tables that accommodate large groups, as well as multiple axe-throwing bars throughout the area. Then there’s Chicken and Pickle, the new indoor/outdoor entertainment complex and restaurant with pickleball courts and yard games.

Given this track record, Toca Football Inc. is betting that Dallas is the perfect city to expand its soccer-themed concept, Toca Social, which opened its first location in August 2021 in London.

“We are believers in the city,” said Zach Shor, senior vice president of Toca Social U.S. “It’s hard to deny that Dallas has become such an entertainment and tech hub. It’s a fantastic growth story, and we want to be a part of it. And it’s an easy place to operate, with great demographics and people who want to get out and try new things.”

Located in Dallas’s Design District neighborhood, Toca Social is rehabbing an industrial brick warehouse. Once completed next year, the 56,000 square-foot, three-story space will feature a dining room, four bars and 34 boxes for playing soccer. Each box has artificial turf and an interactive screen. Users can select from multiple games designed for all skill levels, then follow the on-screen prompts, kicking the ball at various targets to score points. 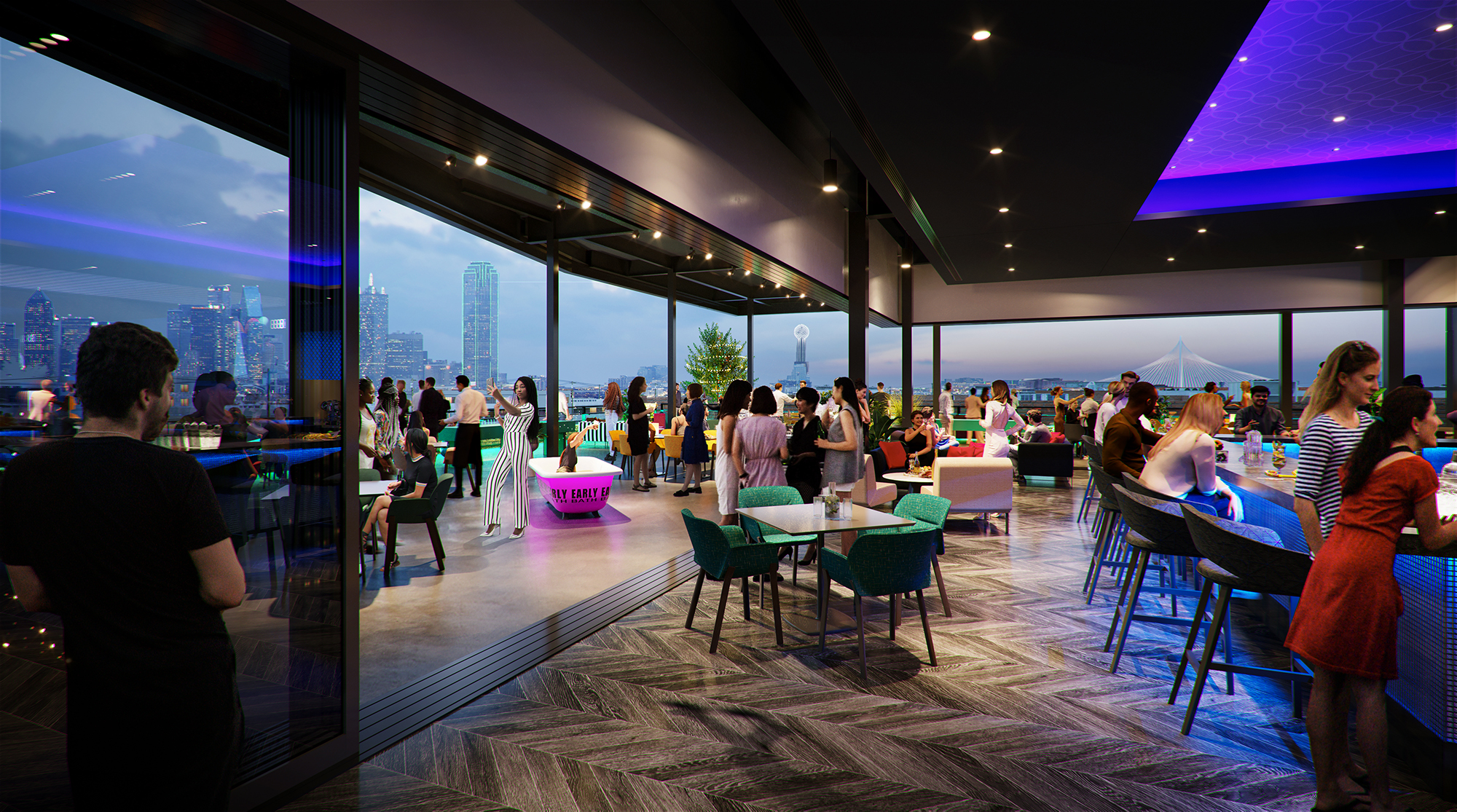 The first floor includes the primary bar, plus a patio with a dessert bar called Sweet Finish that’s described as “Snoop Dogg meets Willy Wonka.” The second floor will be a little more dressed up, with options for corporate events and buyouts, and a 5,000 square-foot patio that looks onto the skyline. The third floor has another bar with retractable doors and more skyline views — Shor said they want to bring the city into the space as much as possible.

Just like the London location, the Dallas menu is being created by chef Ross Clarke, who once worked at Heston Blumenthal’s Fat Duck Experimental Kitchen in Bray, England. Details haven’t been released yet, but the company says to expect globally inspired dishes. The London location offers everything from Japanese fried chicken and a Nashville hot chicken sandwich to burgers, cauliflower cheese bites and a kale Caesar salad.

In addition to its Social concepts, the company also operates 15 Toca Sport indoor soccer training centers (including one in the DFW area) that help young athletes develop their skills. Fresh off a large capital raise last year, the company is embarking on an aggressive growth plan. By the end of 2023, they expect to operate more than 50 soccer training centers and five company-owned Toca Social venues between the United States and United Kingdom. One of the new Social concepts will be located in Birmingham, England, with the others yet to be disclosed. 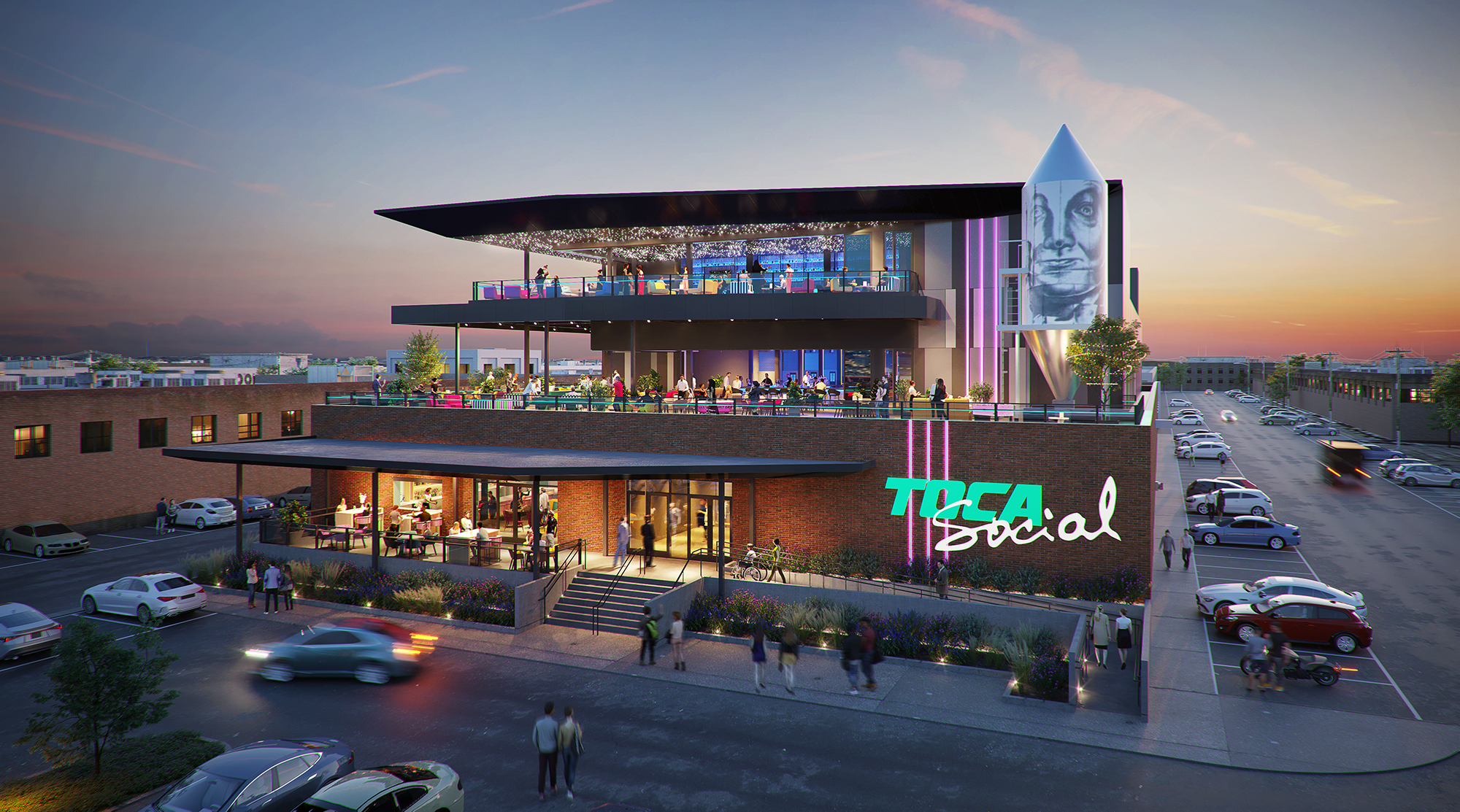 Toca was founded by Eddie Lewis, a two-time U.S. World Cup and former Major League Soccer and English Premier League midfielder who developed much of the company’s technologies and training experiences.

You don’t need to be an accomplished soccer player to partake in Toca Social’s gaming elements, however. Patrons who don’t want to kick a ball can still hang out, eat, drink and watch their friends play. But Shor noted that a lot of novices enjoy participating at the London flagship.

“Soccer is a massive sport and very accessible, and the barrier to entry is low,” Shor said. “But it’s just the vehicle by which you’re competitively socializing. It’s the means to an end.”