Oysters and shrimp at Joliet

Kaia Greek opened in mid-November in Coral Gables. It’s the latest project from SP Hospitality Group, which also brought to life Miami restaurants Copper 29 and Calle 23. The restaurant is inspired by Mykonos and Aegean cuisine, and the menu features fresh Mediterranean ingredients and Greek wines.

Spread of dishes at Kaia

Houston’s Upper Kirby neighborhood welcomed Money Cat in late December. It comes from the Tobiuo Sushi and Bar team in Katy, a nearby suburb, and serves sushi and modern Japanese cuisine in a 4,100-square-foot space.

The Money Cat menu is broken into sections for vegetables, tempura, hot and cold tastings, robata, nigiri/sashimi and makimono. In addition to the fresh and technically precise sushi, standout dishes include koji-cured hamachi collar, a chicken katsu sandwich, uni pasta and curried mussels in a sake beurre blanc.

STK continued its global push by opening its latest restaurant in Uptown Dallas — and first in Texas — on Nov. 2, joining a handful of other nearby steakhouses in the area. It took over the spot vacated by Perry’s Steakhouse and Grille and marked One Group Hospitality’s second opening of the year, following an August debut in San Francisco.

Surf and turf at STK

STK Dallas largely follows the template set at other locations around the country, with a “vibe dining” atmosphere that features DJs, and a menu loaded with salads, seafood and dry-aged steaks, including a selection of A5 Japanese wagyu. STK is open for lunch, dinner, and brunch.

The Finch — which was created by Dallas-based Milkshake Concepts (Vidorra, Stirr, Harper’s) —opened Nov. 21 at the busy Mockingbird Station shopping center. The bright and airy 5,760-square-foot space is anchored by a white-topped rectangular bar and serves a menu of modern American cuisine. Milkshake CEO Imran Sheikh believes so strongly in the concept that he’s already begun construction on a second DFW location in Grand Prairie and will then open a third location in Nashville.

The raw bar at the Finch

The Finch has a raw bar slinging fresh-caught seafood, from snow crab claws and jumbo prawns to oysters on the half shell. Other options on the all-day menu include a Japanese A5 ribeye katsu sandwich, Bombay chicken tikka pizza and a dry-aged pork porterhouse. A selection of daily specials is also available, with comfort foods like chicken and dumplings served on Mondays and shrimp and grits served on Wednesdays.

Otto’s menu pairs a selection of classic and original rum-based cocktails with Cuban-inspired plates, like a medianoche sandwich and mojo chicken. Florida seafood is also featured, and a raw bar serves oysters, ceviche, shrimp, and more. 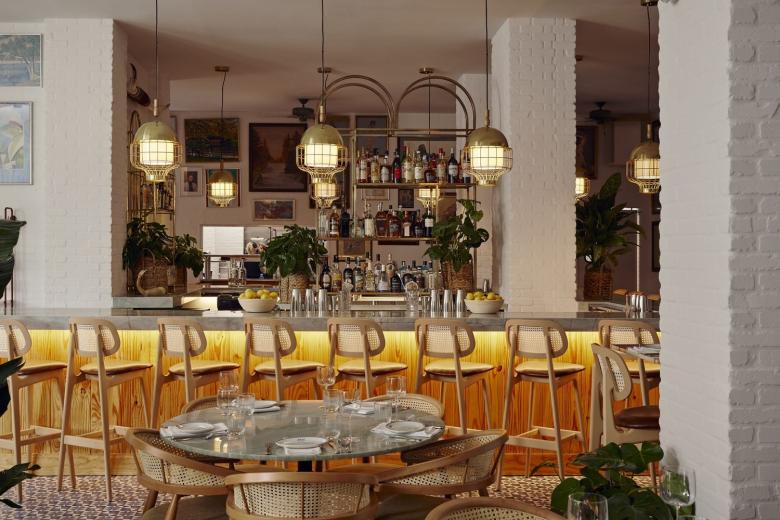