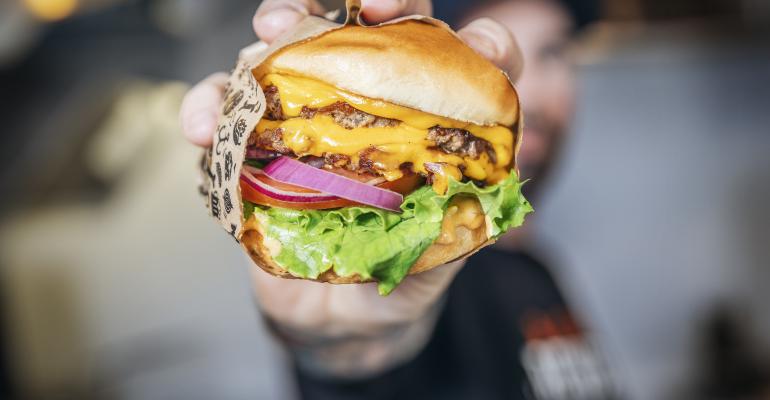 Currently with one location in New York City, the chain envisions a national rollout

Swedish fast-casual chain Bastard Burgers, which opened its first United States restaurant in New York City in February, has plans to expand throughout the city and then elsewhere in the country.

Founded in Luleå, Sweden, in 2016, the concept offers smash burgers — pressed flat and cooked crispy on a griddle — packaged in a New York-inspired street art/hip hop aesthetic. It has grown quickly and now has 67 units in Sweden, two in Norway and now one in the U.S. It plans to enter Finland this fall.

The first U.S. unit is co-located with a new outpost of The Bronx Brewery, in Manhattan’s East Village, and chef Anthony DiCocco runs the kitchen of the dual concept.

“To open up a Bastard Burgers restaurant in New York City, burger Mecca, it's a dream come true for them,” DiCocco said. “Their partnership with The Bronx Brewery fits perfectly. … They get to test the waters and get to know the scene.”

He added that Bastard Burgers has developed a cult following.

“It's a big, big fan base,” DiCocco said. “Walking the streets in Sweden, there are dozens of people that I'll see that have Bastard Burgers merch.

“It's a big movement that they're doing, and the movement will be very well reciprocated in New York City,” he predicted. “It's just the aesthetics inside: It's very welcoming, it's very hip, it's very engaging. You go, you have a couple of burgers, a couple of sides, and then you have yourself a beer, and you just hang out, and the music is playing, and it's a really great atmosphere.”

The menu at Bastard Burgers’ 75-seat, 3,000-square-foot Manhattan location mirrors the offerings available in Sweden and includes the Original Luleå, served with red onion, triple cheddar and Luleå Dressing made with jalapeño peppers and chopped pickles; and the Bastard, which comes with dill pickles, double cheddar, mayonnaise, mustard, ketchup and yellow onion. Burgers range from $12 to $17.

The original Bastard Burgers location in Luleå grinds beef from a local butcher every morning before opening. In an effort to do justice to that artisanal quality in the U.S., New York’s Bastard Burgers gets its beef from ground beef expert Pat LaFrieda, ordering a custom blend of brisket, chuck and shank.

“That sort of combination just clicks. It just works,” DiCocco said. “The taste quality to it is very premium. They use nothing but premium-grade burgers [in Sweden] as well as we do here in the U.S. When I approached [LaFrieda] with the concept of how the burger cuts would be, they were even taken aback, and they were just like, ‘Wow, we never really heard of this.’ And since then we had Pat LaFrieda try it out, and he was floored by the product.”

Bastard Burgers offers a vegan version of all of its burger recipes. The buns are made without animal products, so that in most cases Bastard Burgers only needs to substitute Beyond Beef 3.0 for Pat LaFrieda beef.

“[Beyond Beef 3.0] has beet juice in it that looks like it's bleeding. The taste quality is absolutely amazing,” DiCocco said.

Much like its Swedish counterparts, New York’s Bastard Burgers strives to enmesh itself in the local community by hosting events. Most common are The Bronx Brewery’s brewing demonstrations and Bastard Burgers’ burger unveilings, on the first day of each month, for which the restaurant collaborates with a local chef or artist on a limited-release burger. This month it’s La Cubanita, which comes with bacon, pepper Jack, fried plantains, pickled red onions, watercress salad and truffle dressing.

“We have a DJ come out who spins all night. We have the collaborator come out. They bring out their people, and it's a big event that goes on in the East Village,” DiCocco said. “It goes from 3 p.m. ’til midnight, and it's just a great concept and a great atmosphere.”

Bastard Burgers started out as a hip, niche phenomenon in northern Sweden, where, according to DiCocco, most people tended not to eat hamburgers very often. In 2018 it expanded into Sweden’s capital, Stockholm, and successfully competed against the established hamburger chains there. DiCocco is confident that the concept will succeed in the even more competitive hamburger market of New York City. To him, the quality of the burgers, the catchiness of the decor compared to most local hamburger restaurants and the ambience that encourages lingering will help to establish Bastard Burgers in the U.S.

“Right now they're getting their feet wet in the New York scene without having to fully open up [more locations], because in New York it's either you make it or you break it. So you don't know whether it's going to fall or it's going to survive,” DiCocco said. “But so far, right now, we've gotten nothing but great reviews. We have a whole bunch of international people coming to the restaurant. I see new faces every day.”

The next step will be another location in New York City, planned for next year and this time run entirely by Bastard Burgers. Then, once it has sufficiently developed its U.S.-based systems, it plans to open a handful of locations in and around New York City while also looking more seriously into expanding into other major U.S. cities. Given that more than 50 of its locations in Sweden are franchises, it is likely that Bastard Burgers will seek to franchise many of its prospective stateside locations as well.

“Their five-year plan is very, very ambitious. And the amount of success that they have already, they're going to be able to fully drive this brand out there,” DiCocco said.

For now, the Swedish brand hopes it can return the cultural favor to the city which initially inspired it.

“They really want to bring a little bit of Sweden to New York City, and they want to be able to incorporate that kind of Swedish lifestyle, that street lifestyle, and everything that they have to offer,” DiCocco said.