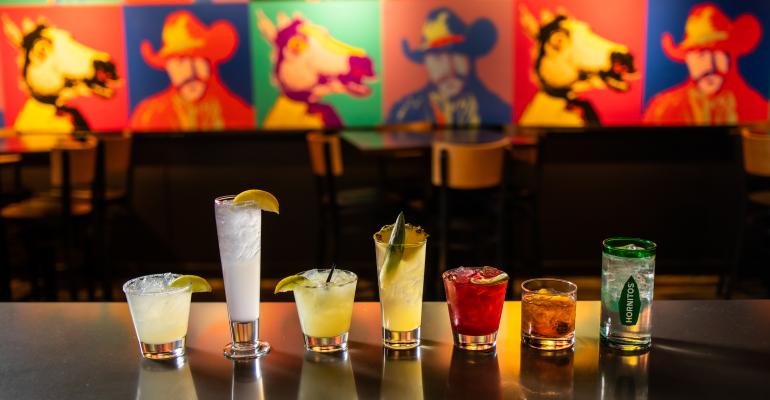 Stove and Co. continues expansion with debut of Good Bad and Ugly

The part underground speakeasy and part western saloon is an homage to dive bars — with a nod to Clint Eastwood — and is the first bar-focused concept from co-owners Justin Weathers and Joseph Monnich as they continue to expand across the western Philadelphia suburbs.

Located underneath the group’s existing concept Stove and Tap West Chester, Good Bad and Ugly features a 2,000-square-foot space with seating for 52 people. The bar offers a variety of games, a pool table, foosball and shuffleboard. The drinks program focuses on a concise selection of signature house cocktails using fresh seasonal ingredients and a dozen taps pouring a combination of local craft beer, national favorites and macro beers — plus one cider.

Cocktails for the modern dive bar are designed with speed and consistency in mind, and average $11. All drinks use fresh seasonal ingredients — including the freshly made boozy lemonades. A limited food menu provides bar classics such as loaded fries, chicken wings, and burgers, with prices in the $10-$16 range.

Weathers said in a statement the goal was to bring something different to the suburb of West Chester. “There's tons of great spots for a drink in the town, happy hour and dinner, but we wanted to create a brand new spot where you can come as you are, let your hair down, have fun, and have things to do. Sometimes you want to go out for a casual night after work and play some pool, grab a great beer and hang with friends. Other nights, you want to stop out for a drink before a date night on the town. We want to be all of those things.”

Additionally, they chose the neighborhood of West Chester for its dynamic scene that comprises families and college students, a strong sense of community and an involved borough office that actively fosters the small businesses in the area.

Weathers and Monnich created Stove and Co. Restaurant Group in 2019 and have been reshaping the suburban restaurant scene since then. While many hospitality groups have seen downsizing over the last two years due to the pandemic, the duo behind Stove and Co. led a major expansion of the business, opening five new restaurants during this time, bringing their portfolio to seven concepts.

Stove and Co. Restaurant Group operates the flagship Stove and Tap, with three locations, and one location each of Al Pastor, Revival Pizza and DePaul’s Table.

The brands all have a slightly different focus. Stove and Tap focuses on scratch-made American classics and chef-driven dishes with a seasonal menu, craft cocktails, American wines, and a beer list that highlights local and nationally celebrated brews.

Revival Pizza is a modern American Restaurant offering a variety of appetizers, pizzas, sandwiches and large plates using fresh and local ingredients with a fun, family friendly atmosphere; while Al Pastor is a modern Mexican eatery. DePaul’s Table is their foray into upscale-dining — a modern Italian steakhouse that the team opened in partnership with restaurant veteran Anthony DePaul.

Both Monnich and Weathers come from an extensive hospitality background with close to two decades of experience working in the food industry. They graduated from the Culinary Institute of America, and have held a variety of kitchen positions at a number of restaurants, including with the Philadelphia-based Starr Restaurants.

Weathers said Good Bad and Ugly is off to a good start.  “It has been a very positive win for us to push through the tough times and see that we are able to put something together that works in the post pandemic world," he said.

The concept could be expanded, but, for now, the group is focusing on getting it established.

For now, they are intent on being deliberate and building an organic following.

“When we create a new concept, we at first want to think of it as an individual restaurant we are pouring our heart and soul into — and that matches the personality of the community we are in. However, there is always the possibility of expansion, as we saw with Stove and Tap. Nothing is off the table,” Weathers said.