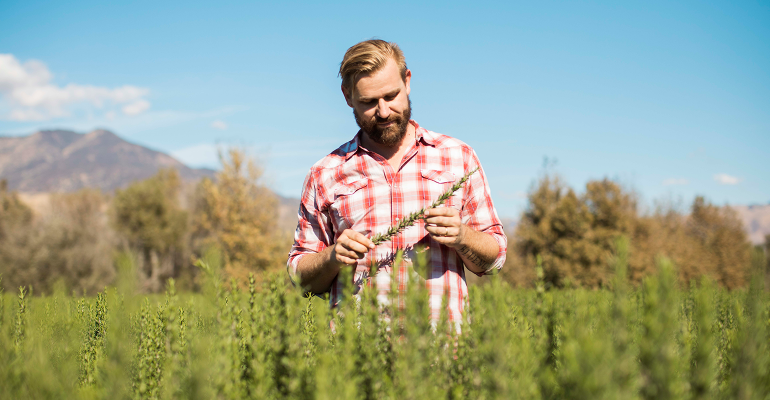 The new Farmhouse restaurant is scheduled to launch in Los Angeles on March 17 with a menu that not only brings farm-fresh produce to the table, it also brings the farmer.

Farmhouse is a concept developed by second-generation farmer Nathan Peitso, whose family owns Kenter Canyon Farms, a grower for many of Southern California’s top restaurants.

Peitso is among a growing number of farmers who are opening restaurants with a direct connection to ingredient sourcing. The growing Farmers Restaurant Group in Washington, D.C., for example, was founded by North Dakota Farmers Union and operates the Founding Farmers restaurant concepts, as well as a bakery, creamery and distillery.

For Peitso, who calls himself the restaurant’s “executive farmer,” it has long been a dream to open a restaurant. He is partnered with Laurent Halasz, founder of the Fig & Olive chain that first opened in New York.

Peitso grew up on his mother’s farms, spending much of his childhood visiting restaurant kitchens and hanging out with chefs.

“We would make deliveries of greens and I would tag along, and they’d give me cookies and we’d stick around for lunch,” he said. “We were working and dirty and growing these beautiful things, but I loved the glamour of restaurants. I loved hearing about somebody famous who loved our salads and the way they prepared it.”

Peitso’s mother is Andrea Crawford, a forerunner in the farm-to-table movement in California, who in the early years was a server at Chez Panisse. Crawford at the time was an avid gardener who began growing European-style salad greens in her yard, and the yards of neighbors. Sometimes shared them with Chez Panisse owner Alice Waters, said Peitso.

That passion for gardening eventually became a business and Los Angeles chef Wolfgang Puck helped finance a move by Crawford to Southern California, where she began growing on a larger scale. Now Kenter Canyon Farms includes more than 150 acres across California, producing mostly lettuce and herbs, and it’s a source often noted on restaurant menus.

And the farm is expanding.

Peitso’s restaurant Farmhouse will also showcase Roan Mills flours, such as the Sonora Gold that will be used for the restaurant’s daily brioches and an ancient-grain Durum for the pasta.

Of course, the restaurant will also feature Kenter Canyon’s greens, but Peitso said he is also spotlighting the broader farm community, which will produce some ingredients exclusively for Farmhouse.

“I know all these farmers personally, and I know their practices,” he said.

“These are friends who I grew up with, who are also farmers, who I respect and love and I want to showcase their produce, and my own produce, on a seasonal basis.”

The executive chef at the Farmhouse is Craig Hopson, who worked previously in the kitchens at restaurants like Picholine and Le Cirque in New York.

The opening menu will feature dishes like Southern Sierra carrots from Weiser Farms that are served confit with harissa, avocado and almonds for $14; and peas from Kong Farm with burrata for $15. An eight-hour braised lamb shoulder is served with carrot-saffron romesco, roasted carrots and almonds for $24; and a sharable roasted Petaluma chicken is stuffed with golden raisins with red frill mustard greens for $62.

There are pizzas and pastas, and, for dessert, a fennel pavlova with local banana cream and lemon shaved ice; or a maple-eucalyptus semifreddo with goat’s cheese snow and walnut tuile.

The 250-seat restaurant is on the street level of the Beverly Center mall on the edge of Beverly Hills. The restaurant has an open kitchen lined with shelves of canned and preserved goods, as well as a living room area around a fireplace, with an atrium that evokes a greenhouse.

Peitso said he is able to shift his focus to the restaurant in part because his younger brother Charles Dedlow is now 21 and stepping up to lead operations at the farm.

Farmhouse, meanwhile, is a concept Peitso hopes to grow.

“I would definitely like to have this multiply,” he said. “It’s a concept that has legs. But we’ll have to see.”