Located in Denver's historic Ice House, chef Kyle Foster brings a taste of New Orleans to the Mile High City. In fact, the name pays homage to the famous pedestrian alley in the French Quarter of New Orleans, a place the southern chef knows well.

The setting proves just as unique as the building, which was built in 1903 and originally housed the Littleton Creamery. Pirate Alley Boucherie covers 2,850-square-feet, complete with large wooden beams overhead and an open kitchen. One side of the space sports carrot, radish and turnip print wallpaper, another exposed brick, and yet another smooth creamy paint. It's whimsical and comfortable, and great for the downtown lunch crowd.

Chef Kyle Foster serves po' boys along with other sandwiches such as a barbecued shrimp dip, French club and grilled bologna. The menu also features salads, gumbo, root vegetables with sorghum, and radish-celery salad with brown butter lemon curd. Sandwiches range from $12 to $16, and other menu items ring up around $10.

Tucked away into a bright little store front in Lyons, Colo., is 40-seat Marigold, which opened in early August. The 1885 building originally housed a train depot, and formally sported a restaurant dedicated to butter. At the helm of Marigold is chef-owner Theo Adley, who previously worked with Frasca Food and Wine in Boulder, Colo., and the Little Nell in Aspen, Colo.

The new American cuisine features local ingredients and plenty of fresh herbs. Dishes range in size from smaller plates like thick country bread and marinated olives, to mid-sized dishes such as compressed cantaloupe with chèvre, sweet onion, and hazelnut (pictured). These run between $8 and $16. Larger plates, such as rigatoni lamb and pork Bolognese; brick chicken with shishito peppers, carrots, labneh and salsa verde; and bucatini with tomato, zucchini and saffron cost between $18 and $26.

Elegant French fare gets served at this new Denver spot owned by husband-and-wife chef team Tim and Lillian Lu, bringing a different sort of restaurant to the Highlands neighborhood. The bright and airy space opened at the beginning of August, turning what used to be the funky eatery into a refined place for dinner.

Both of the Lus graduated from The French Culinary Institute in New York City. They said the goal of Noisette is to serve "cuisine bourgeoise," or the type of home cooking found in the houses of many middle-class French families. Think salmon with beurre blanc, grilled mushrooms with eggplant ragoût, seared duck breast (pictured), and dauphine aux escargots (pictured), which is a light potato choux pastry with chopped snails. Menu items average $16 for appetizers, and between $30 and $68 for entrées.

There's a bakery next door to the dining room where customers can buy items such as a French ham and comté cheese croissant, a Provençal vegetable tart, almond drageés, pâté en croûte and more. The freshly baked $8 baguette with cultured brown butter is also a signature item, and served at both the restaurant and the bakery.

Like many places during the pandemic, Rocky Mountain Tap and Garden in Louisville, Colo., had setbacks. But the casual tap room is back in full force with new owners and a huge outdoor beer garden in front. Also new to the restaurant is chef and restaurant consultant Nick Kayser of Rooted Craft Kitchen, who oversees the menu and kitchen.

The fare proves causal but elevated thanks to Kayser's years working in upscale dining. See this blending of worlds in the plate of steak frites with chimichurri, baby gem Caesar salad with anchovy vinaigrette, and truffle-laced, hand-cut fries. Prices range from $8 for sharable snack plates, between $15 and $21 for entrees, and $7 for kids plates.

The venue is co-owned by Garret Nicodemus (left, next to Kayser), who has made beer a big part of the brand. In fact, there's a wall of self-serve beer. Currently it's the only tap wall in Louisville, and sports around 30 beverages ranging from locally-made beer to hard seltzer to gluten-free ciders.

Located inside the Ritz-Carlton, Bachelor Gulch, Sakaba is the latest eatery to open in the Beaver Creek, Colo., area. Helmed by chef Jasper Schneider (pictured), who oversees all of the restaurants on property, the focus is on Japanese fare, specifically sushi and sashimi.

Formally the hotel's adult-only lounge and cigar bar, Sakaba has the feel of a cozy den complete with a fireplace, couches and rustic wooden tables. In essence, it's what one would expect from a ski town sushi restaurant. It's a laidback spot, but with elevated fare such as the $65 Japanese uni appetizer.

Sakaba means bar, and here the staff whip up elegant cocktails and offer a curated list of sake and wine. The sushi and sashimi feature the usual run of seafood such as tuna, salmon, roe, and yellowtail. However, many of the rolls and pieces get topped with items like foie gras "snow," edible gold and truffles. Rolls range from $26 and $48, and pieces run $8 to $23. There are also two extravagant rolls, the lobster at $65, and the toro caviar at $155.

Straight from Brooklyn comes Ben and Pete Van Leeuwen’s and Laura O'Neill's artisan ice cream shop, which landed in Colorado, in both Boulder and Denver, this past August and September, respectively. The original food truck started in 2008, and over the years the concept has grown to brick-and-mortar shops around the country, as well as grocery store items. The Denver shop opened in Larimer Square, right in the heart of downtown.

Van Leeuwen Ice Cream teamed up with Denver's Crooked Stave Artisan Beer Project, creating a special-edition flavor featuring raspberry and blueberry sorbet made with the brewery’s sour ale and sour rosé. Also on the menu is more than 30 signature flavors as well as a lineup of creamy vegan desserts. Prices range start at $6.25 for a scoop and go up from there depending on how many scoops and toppings guests desire. 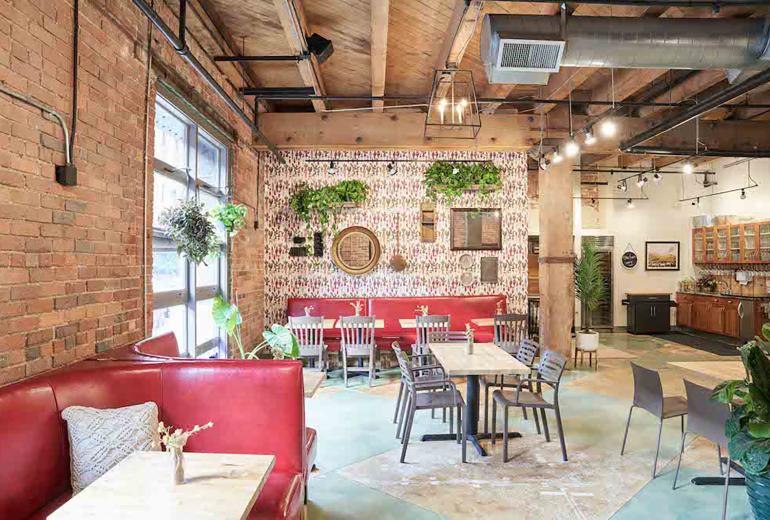 Next Up
Six new restaurants to enjoy in Seattle
Start Slideshow ›