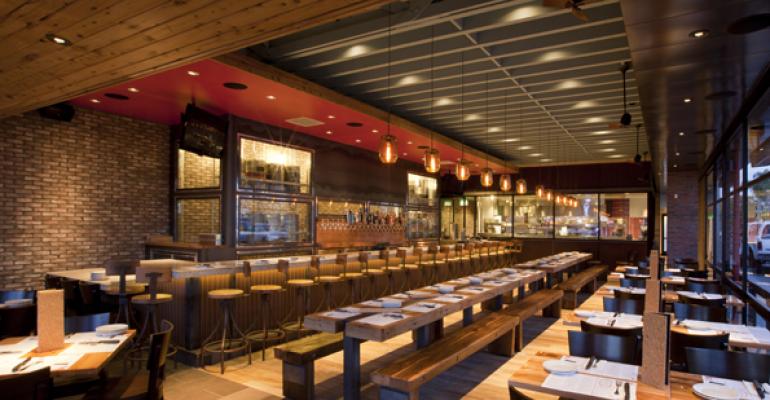 Simmzy’s: Tapped out in a good way

A vast array of draft beers drives profitability at a new gastropub in Long Beach, CA.

It’s hard to go thirsty for long at the new Simmzy’s in Long Beach, CA. This 98-seat gastropub dispenses an ever-changing lineup of craft beers through its 31 taps, while 10 more lines dispense small production wines chosen from an expertly curated list. Pair this huge selection with a menu of local-and-seasonally focused elevated pub grub and you’ve got what seems like a can’t-miss formula for contemporary gastropub success.

At least it hasn’t missed the mark since co-founders Mike Simms and executive chef Anne Conness first tried out their beer-centric Simmzy’s idea in Manhattan Beach, CA, in 2009. Simms and Conness had enough success they decided to open a second unit in Long Beach this spring.

They could have gone in a different direction. This pair also runs Tin Roof Bistro, a casual wine country concept in Manhattan Beach. Simms is also managing partner at the nearby M.B. Post, chef David LeFevre’s casual dining standout. But he and Conness chose Simmzy’s as their expansion vehicle. Long Beach is 19 miles away from their home turf, yet is a different type of market by Southern California standards. A snazzy interior conceived by ace design firm SF Jones makes the new place look right at home in the emerging Long Beach community of Belmont Shore.

Some EatBeat Extra readers may be wondering why a 98-seat restaurant needs 41 beer and wine options on tap. That’s nearly a 2-1 tap-to-seat ratio, more pouring capacity than even a bar that caters to college kids would have.

The answer can be discerned by taking a close look at this restaurant’s beer program. Consider the numbers. Nothing on Simmzy’s beer menu is under $6, with many offerings costing more. Standard back-of-the-envelope calculations on the profits from a keg of beer call for 130 pints of beer from each half barrel keg (i.e., 15½) gallons of beer. At $6 per pint, Simmzy’s can gross $780 per keg. Figuring the cost of a half-barrel keg of craft-quality beer at $200 or so, the economic rationale of multitap gastropub operations like Simmzy's become clear.

Throw in the ability to pair beer with top-notch food and the profit potential looks even better. A gastropub like Simmzy’s makes money on its food while also capturing the very high margins on beer and wine. Standard marketing programs like beer flights and individual beers paired to certain menu items help keep the taps flowing.

Much as we appear to be in the new golden age of mixology, there’s plenty of money to be made off of beer. If you’re wondering why many chefs and operators who already run profitable operations in other segments are jumping into the gastropub segment, the numbers tell why.