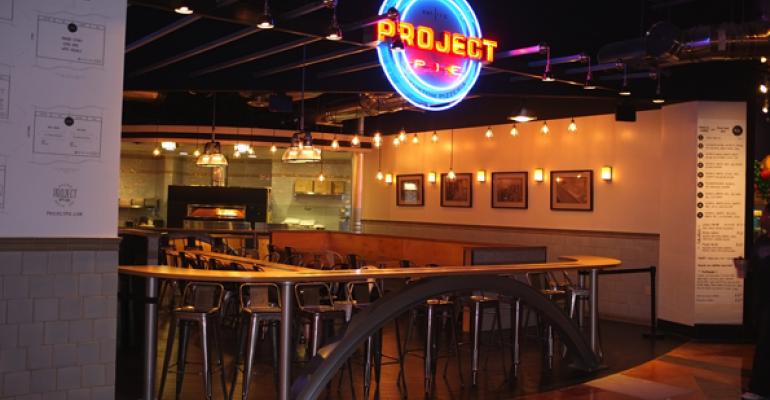 James Markham didn’t get his fast-casual pizza concept right the first time. It took six months of experimenting, some 400 burnt pizzas and then several years and two similar startups before he got Project Pie off the ground.

“I’ve done pizza my whole life and I’ve always loved Chipotle [Mexican Grill]. How come nobody had done that with pizza?” says the brash 43-year-old entrepreneur, former boxer and pizza pioneer of the question he tried answering when he returned from running a small chain of pizza joints in Shanghai five years ago. “I started testing, trying to get the right cook time, speed and flavor profile. It was a nightmare, but I finally got it right.”

Markham helped start MOD Pizza—an acronym for made on demand—in Seattle in 2008 with Starbucks’ executives, who, he says, “screwed it up the minute we signed the papers.” He left a year later to create Pieology, another Chipotle-style build-your-own-pizza concept, which debuted in Fullerton, CA, in 2011. When his partners wanted to take things slow, Markham left to launch Project Pie. His first property opened at the MGM in Las Vegas last October, the second in San Diego last month and a third will open next month in Boulder, CO. Plenty more are planned.

“This is the culmination of all my screw-ups,” says Markham, who clearly likes to move fast. His pizzas cook in less than two minutes, and he plans to grow his chain of two restaurants to more than 10 locations by year’s end, including expansion internationally and into franchising.

Project Pie, like MOD Pizza and Pieology before, allows guests an assembly-line ordering style with numerous fresh toppings to choose from, which are then placed on dough previously pressed on a modified old tortilla press. The pies are baked in a custom-designed 800-degree oven and the end result is an affordable and customized artisan-style pie. Cheese pizzas cost $6 and all others are $7.50, including several predesigned options on the menu or the build-your-own variety with unlimited toppings.

The oven is critical, but Markham says the secret to the pizza is really the moisture content in the dough. It allows the bottom of the pizza to get crispy, but the rest to have a chewy texture that’s not soupy. He spent six months working to find the right blend of flours.

Markham claims to be the innovator of this emerging fast-casual concept of customizable artisan-style pizzas, and with MOD Pizza debuting in 2008, he’s probably right. But Project Pie now faces several other rapidly growing competitors like Blaze Pizza, 800 Degrees, Pie Five and PizzaRev, which just added a minority investor who knows how to grow: Buffalo Wild Wings.

“I created half the competition and there’s a bunch of people popping up and copying us,” Markham says. “I can bake cookies and cupcakes, but if you ask me to roll out a concept, I wouldn’t know how to scale it and do it right. People think it’s just pizza, but there’s a reason and way we do it. Our competitors are trying to figure out all that stuff, and they haven’t been at it as long as me. That’s the differentiator.”

Markham and a business partner own and operate the 1,800-square-foot Project Pie in Vegas and the 2,300-square-foot San Diego location. They’re opening the next one in Boulder and are eyeing locations in Washington, DC, and New York City. Markham recently signed a deal with Simon Malls to open several locations in some of their shopping centers. All of those will be corporate owned, he says, but Project Pie is also licensing the concept to an operator in the Philippines for a 25-unit deal there and looking for more multiunit franchisees.

By the end of the year, Markham expects to have seven to 10 corporate locations open and another three to five franchised locations domestically and the same internationally.

The simplicity of the concept for the consumer—speed, value and customization—is also what’s appealing to owners. The speed of growth will help put the brand on the map, while the economic model provides value for operators. The customization comes with Markham’s approach to building a brand of one-offs, what he calls an “anti-chain.”

The pizza, ovens and attitude will be standard at all locations, but the design will vary. There will be a connection—basic colors, an industrial feel, some lighting—but no two properties will look exactly the same.

Markham believes the concept can and will grow quickly, although he says a strong advisory board, including friend Kat Cole, the president of Cinnabon, keeps him in check.

Where does he see Project Pie in five years? “We better have stores ranging in the hundreds or I’ll be disappointed,” Markham says. “But most important is to create and make sure this concept keeps going. If that meant I only have 200 and not 500, but people loved the brand, than I’d rather have that.”