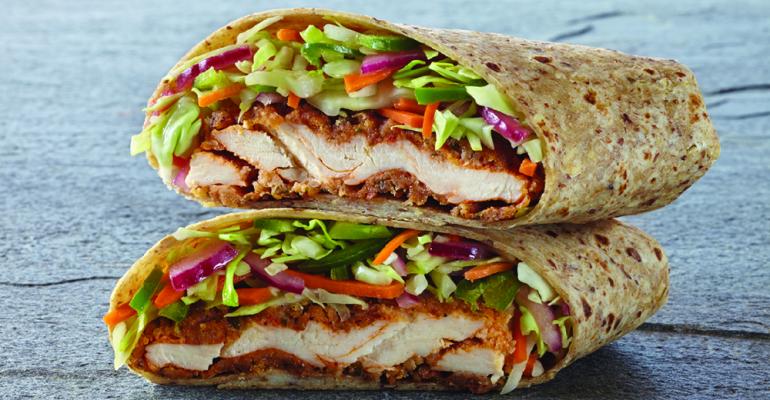 When the eight-chain The Organic Coup wanted to expand, it looks to going back to school—the University of San Francisco to be exact.

For a brand that prides itself on being the country’s first USDA-certified organic fast-casual restaurant chain, the college market is a prime customer category for growth.

“The student body always has a push for more variety and concepts, so it was in response to that,” says Micah Cavolo, who runs USF’s dining program through the management company Bon Appetit. Bon Appetit CEO Fedele Bauccio tried a sandwich for himself at one of The Organic Coup’s nearby locations—and loved it so much that he encouraged Cavolo to open an outpost at the university. The sandwich was delicious, but more important, The Organic Coup’s focus on organic ingredients aligned with Bon Appetit’s commitment to sustainable foodservice. 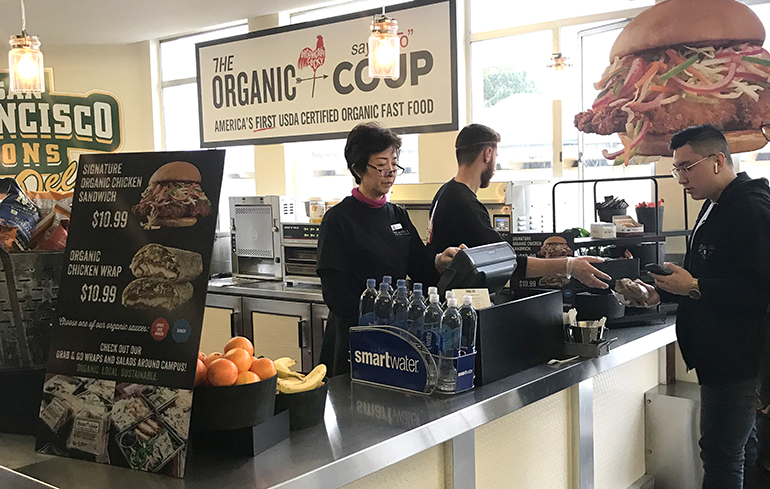 The Organic Coup’s location at the University of San Francisco opened after Bon Appetit’s CEO Fedele Bauccio tried a sandwich at another location and thought it would make a good addition to the USF account.

The Organic Coup’s eight other locations have extensive menus that include multiple chicken sandwiches, wraps and salads, along with healthy breakfast options like acai bowls. But Cavolo tightened the focus for USF, offering an organic chicken sandwich on a brioche-style bun and an organic chicken wrap, both with choice of spicy barbecue ranch, ranch or mustard vinaigrette. A handful of organic chicken salads are also available. “The reduced menu comes from the fact that The Organic Coup shares space with another station,” Cavolo said. There’s a chance that it may expand for next semester, though.

Rather than open a standalone location on campus, Cavolo opted to put The Organic Coup inside USF’s Market Café, a deli concept offering burgers and sandwiches. “We wanted a high-volume space to see how well it was received and also to create an additional offering for the clientele,” he says. The main issue was converting one of Market Café’s food stations so it could handle The Organic Coup’s equipment. The chain cooks its chicken with air fryers, which require more electrical power than the existing station was set up to provide. “So there was the process of getting the existing power converted over to support it. It wasn’t a major hurdle. Once it was approved by the university it took a couple of days to get done,” says Cavolo.

Organic certification and air-fried proteins aren’t the only things that set The Organic Coup’s offerings apart. The chicken is air-chilled for better flavor (as well as less chance of bacterial contamination), breaded in a combo of whole-wheat flour and panko breadcrumbs and cooked in organic refined coconut oil. And all of the offerings—from the buns, to the wraps, to the sauces and dressings—are made with minimally processed ingredients and are free of GMOs, antibiotics and added hormones.

Opening The Organic Coup within a larger dining hall means that it feels more like a station than its own concept. “It’s marketing that separates it from the deli, but it doesn’t have the same feel as the independent retail stations,” Cavolo notes. There’s a simple overhead sign with the chain’s name and logo, and a countertop poster board listing out the menu options. 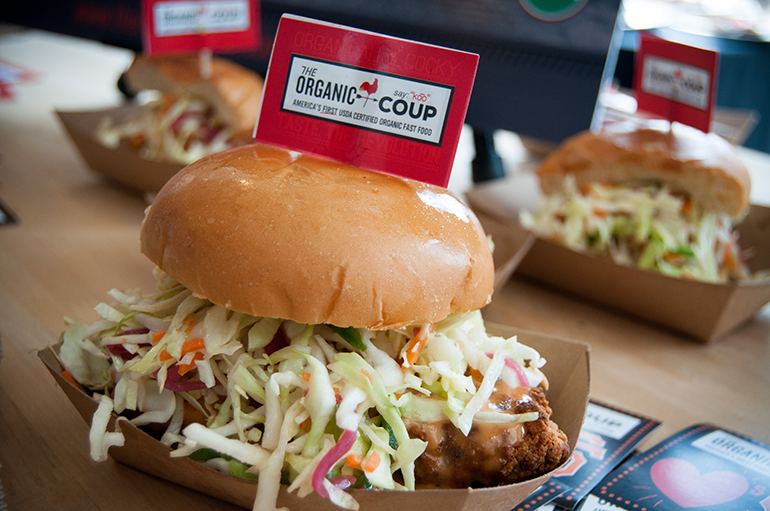 The Organic Coup’s eight other locations have extensive menus that include multiple chicken sandwiches, wraps and salads, along with healthy breakfast options like acai bowls.

The Organic Coup’s prices are a little higher than what you’d find at comparable fast-casual chains, and the same is true for the USF location. A basic custom deli sandwich from Market Café costs around $7 while the organic chicken sandwich and wrap each ring in at $10.99. But the added cost hasn’t been a deterrent, Cavolo says. And just like the other Market Café offerings, students can buy food from The Organic Coup using their meal plan.

The new station has been a hit with customers and earned a good write-up in USF’s student newspaper. “The response has been positive,” Cavolo says. “The daily throughput has been consistent since we opened, and I would assume that once we add to the menu it will only grow in popularity.”

As for how it’s affected the Market Café as a whole? Cavolo notes that The Organic Coup hasn’t increased traffic to the dining location as a whole, but it has pulled traffic away from other stations. “Our café really is at maximum capacity so it’s just a matter of where the students want to spend their money on any given day,” he says. “The Organic Coup offers a consistent, quick menu that’s been well received with return customers.”