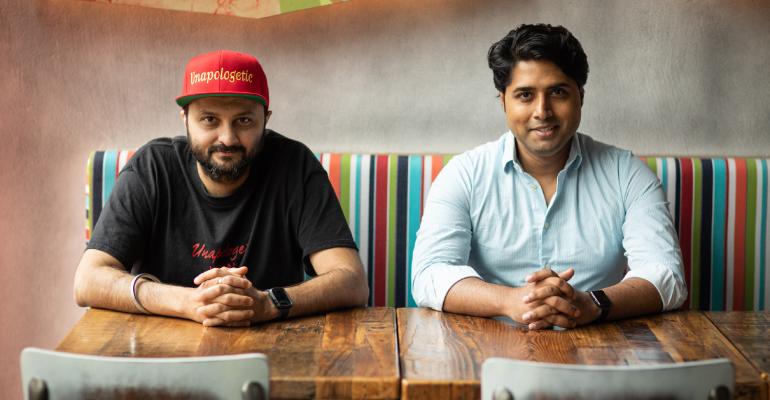 Clay Williams
Rowdy Rooster’s appeal to the cherished memories of its founders fits into the larger project that they hope to carry out with Unapologetic Foods.
Trends>New Restaurant Concepts

With Rowdy Rooster, the latest concept by Roni Mazumdar and Chintan Pandya’s Unapologetic Foods — best known for the Indian provincial restaurant Dhamaka — the team is once again introducing New Yorkers to a new kind of Indian cuisine.

The 8-seat, 400-square-foot restaurant opened on Feb. 22 and is a celebration of India’s long-standing fried-chicken traditions.

Although in India fried chicken is typically eaten as a snack purchased from street vendors, Mazumdar and Pandya designed Rowdy Rooster’s menu to accommodate diners looking for a full meal as well. Most entrées cost $9, such as the Lil’ Rowdy, a pakora-style chicken sandwich in a pao roll with mint chutney, scallion yogurt and pickled onion; or the Chile Chicken, served as chunks of fried chicken in chile garlic sauce, green chile and scallions. The sides, which include items such as potato pakoras and tomato rice, mostly run for $4, and the four varieties of chutney cost $1 each. To round out the experience, you can get a mango lassi for $5. 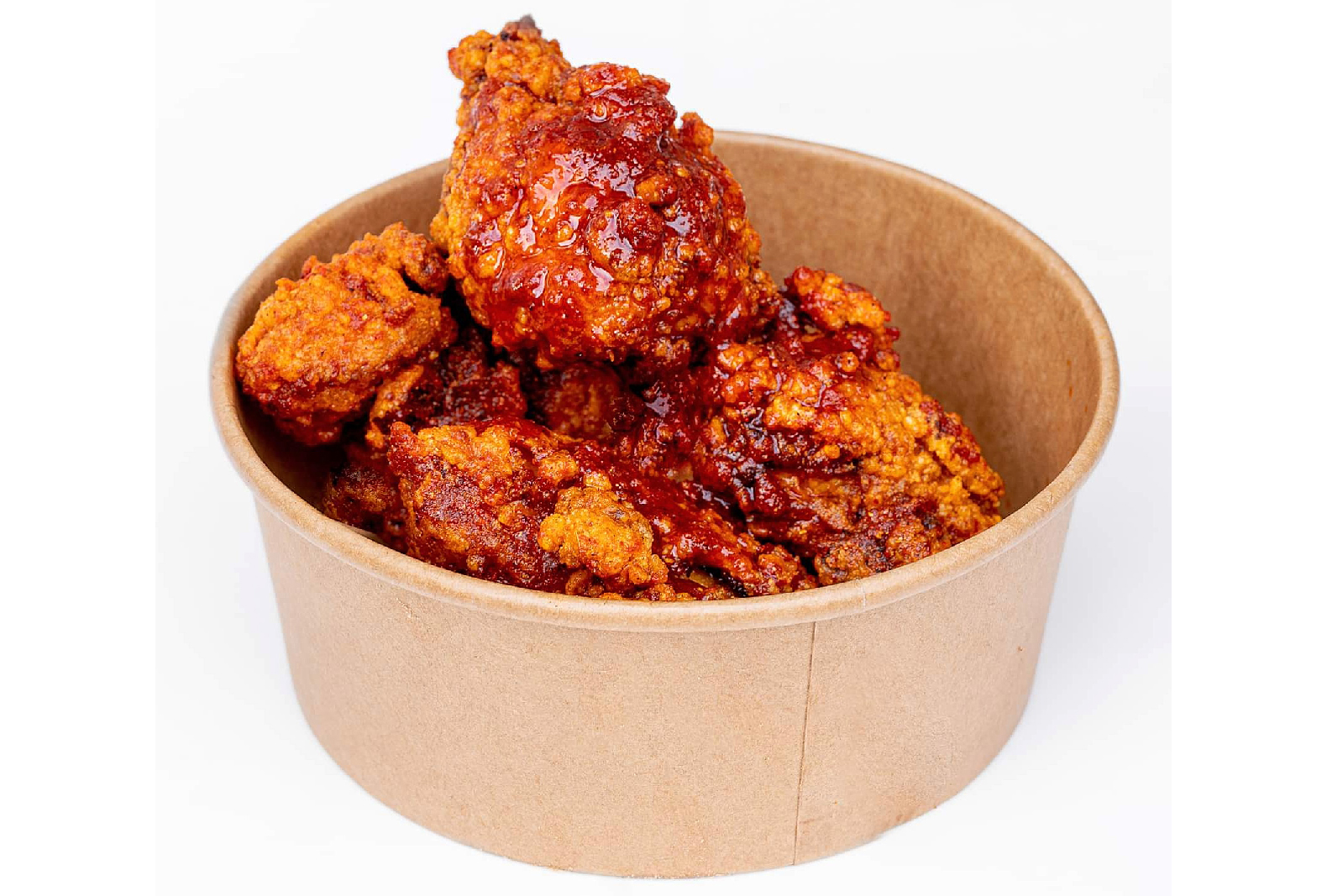 “We actually love eating fried chicken,” said Pandya, the group’s chef. “Whenever we travel to any new city, the first thing we do is we check out the best fried chicken places. We have been doing that for a few years now. So it was always in the back of our mind to do something that's fried chicken.”

Mazumdar said fried chicken has existed in Indian cuisines for centuries. Preparing the dishes at Rowdy Rooster is not simply a matter of making American-style fried chicken and adding Indian spices. Rather, what they make is “a completely different product from the ground up.” Unlike traditional American fried chicken, which usually comes in whole pieces and has the skin on, the chicken at Rowdy Rooster, following standard practice in India, is hacked into chunks, and only the Bad to the Bone recipe leaves the skin on. The chicken is then marinated in a yogurt-based sauce rather than dry-rubbed. The chutneys are traditionally paired with pakoras and thus are encouraged as an add-on to the signature chicken recipes.

The three spice levels available for the signature chickens (by increasing intensity, Rebel, Rogue and Rowdy) correspond to chile blends native to three different states in India: Rebel to Rajasthan in the Northwest, Rogue to Kerala in the South and Rowdy to Assam in the Northeast. 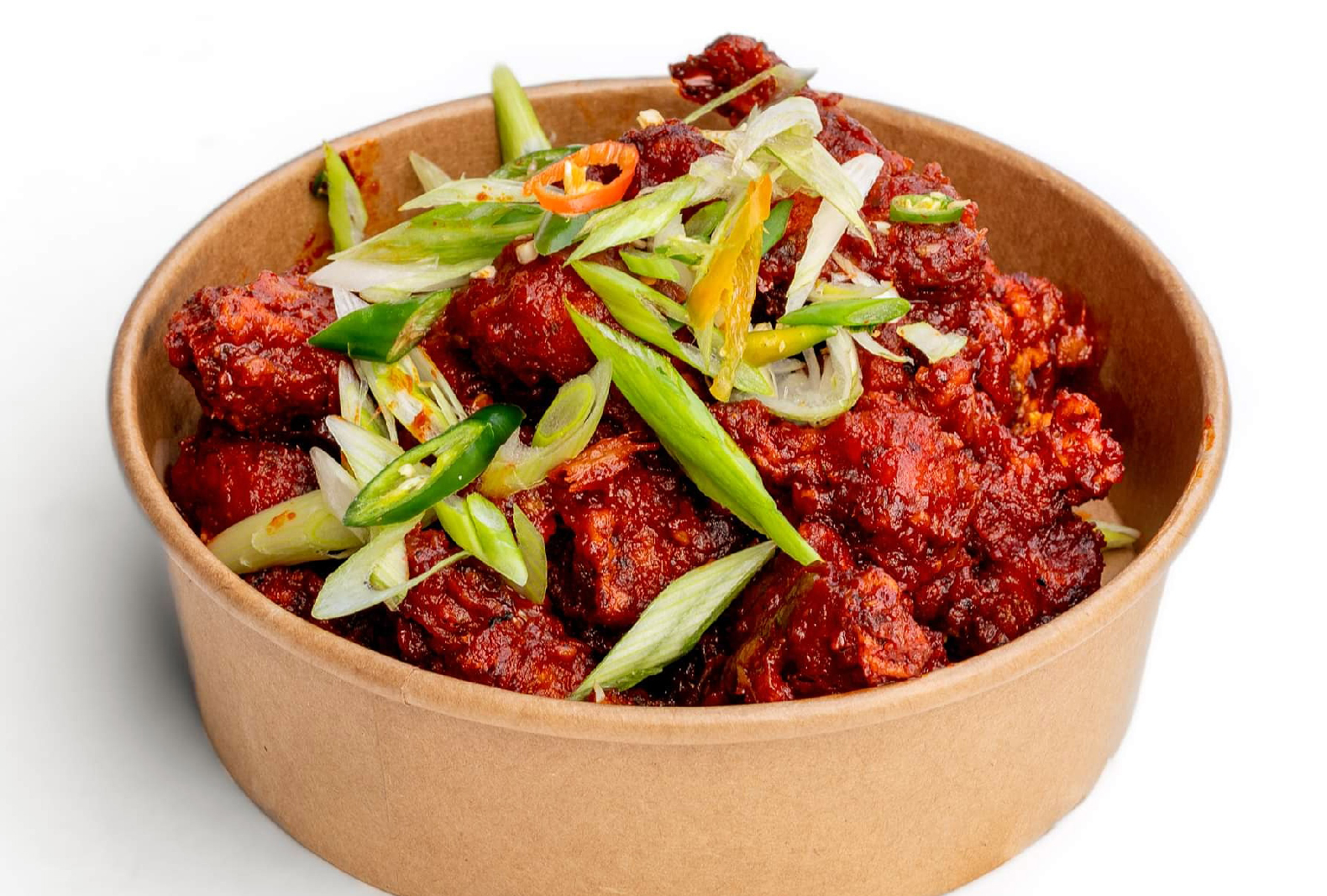 “The goal was, how do we look back at the last few centuries of what has been evolving through our culture and really take every component of that and respect those moments that have existed through time?” Mazumdar said.

The two types of fried chicken on the menu, chile chicken and the pakora-style recipe they call their signature chicken, emerge from distinct culinary lineages in India. According to Mazumdar, chile chicken originated in eastern India and has since become a popular street food item all over the country.

Each type of chicken is also a favorite of one of the restaurant’s two founders. For Pandya, who comes from Mumbai, it’s the chile chicken. Growing up in a vegetarian family, chile chicken was something he could indulge in only outside the house.

“There are these small bars in Mumbai where you go, and you pick up the alcohol and they sell like four or five dishes. And one of the favorite dishes in all these bars is actually the chile chicken,” Pandya said. “And I fell in love with chile chicken. Like, I can eat chile chicken any time of the day. That’s my thing.”

Mazumdar’s situation was almost the exact opposite. His family encouraged him to bring chicken pakoras home whenever he could.

“There's a train station about 12 or so stops away from where I lived in Kolkata, India. And there was a deal that we had with every single family member or family friend, anybody who passes by that station,” Mazumdar said. “There's a street hawker that would be there, and he makes the most unbelievable chicken pakoras you've ever had. And you would get that in this newspaper folded like a packet, which is very common in India. When they get to that station, the train would stop for a certain time, and it happens in like three seconds. That's all he's doing. You jump off, get a packet, pick it up and you come home. In my life, I've probably never had chicken of that version, ever [besides the one at the train station]. And it's always been that aspiration to be able to recreate that, to be able to share that. And as a kid, it just blew my mind. I still can taste it. It's this beautiful crust that was outside these little pockets that are still bubbling. … It's the most incredible thing. And I was about nine years old when this was happening. So then I moved to this country. I've been here most of my life, and I've had my share of KFCs and Popeye's and all of that stuff. But somewhere I've felt that that version of chicken never exists anywhere in America.” 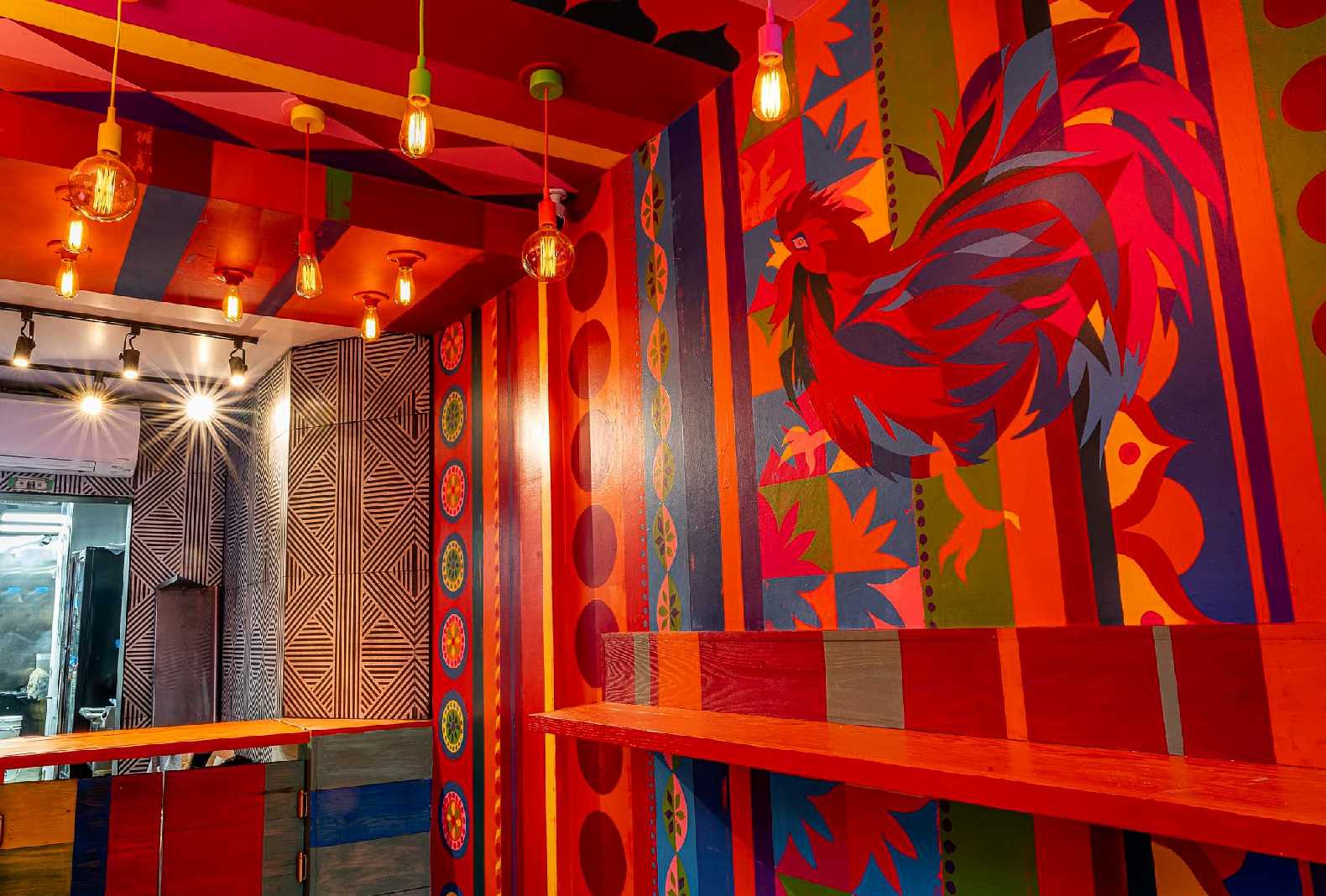 Rowdy Rooster’s appeal to the cherished memories of its founders fits into the larger project that they hope to carry out with Unapologetic Foods. It’s their fun and casual foray toward the goal of, as Mazumdar put it, “demystify[ing] Indian cuisine in America.”

“To do that, we understood the fundamental problem, which is, for far too long Indian food has been extremely monolithic in this country, meaning I can walk into the majority of Indian restaurants and I can tell you the menu before I walk in, without even looking at it, because I know it's going to consist of the same 10 or 12 dishes,” Mazumdar said. “Every ethnicity has gone through that in this country. When you start to look at things like Chinese food, when you start to look at Thai food — what is red curry? Green curry? What a General Tso's chicken? So you start to see that pattern. So it is not to look back and look down or anything. It's just to say, that's the reality that we've had. I think we have this opportunity today to disrupt that space, to really question the status quo that has been there for so long, and to do that, we realized we are not just creating restaurants: We are creating a set of ideas where people can continue to follow, and one day, maybe when we have done a little bit more, people can have exposure and understand that Indian cuisine isn't just about those five or 10 dishes.  It's a whole subcontinent. It's an entire world of cuisine, or a cluster of many cuisines together. If you take the Southern part of the country, it's 25% bigger than all of Western Europe. But no one goes to Spain and says, ‘I know German food.’ No one says that. But that's essentially the problem that we have with Indian cuisine.”

Mazumdar gives the example of other kinds of food, like pasta, which emerged from cuisines outside the United States, but which became so popular here that their country of origin no longer became their essential characteristic.

“I think there's an opportunity for Indian food to do the same and actually be a core part of the American consciousness: A fried chicken sandwich to a biryani,” Mazumdar said. “You don't have to wake up and say, ‘I want to go to an Indian restaurant.’ You can just crave a fried chicken sandwich. You can just crave an Indian fried chicken. You wouldn't have to think of the whole cuisine associated with it because it is now part of the American consciousness, the same way pasta is.” 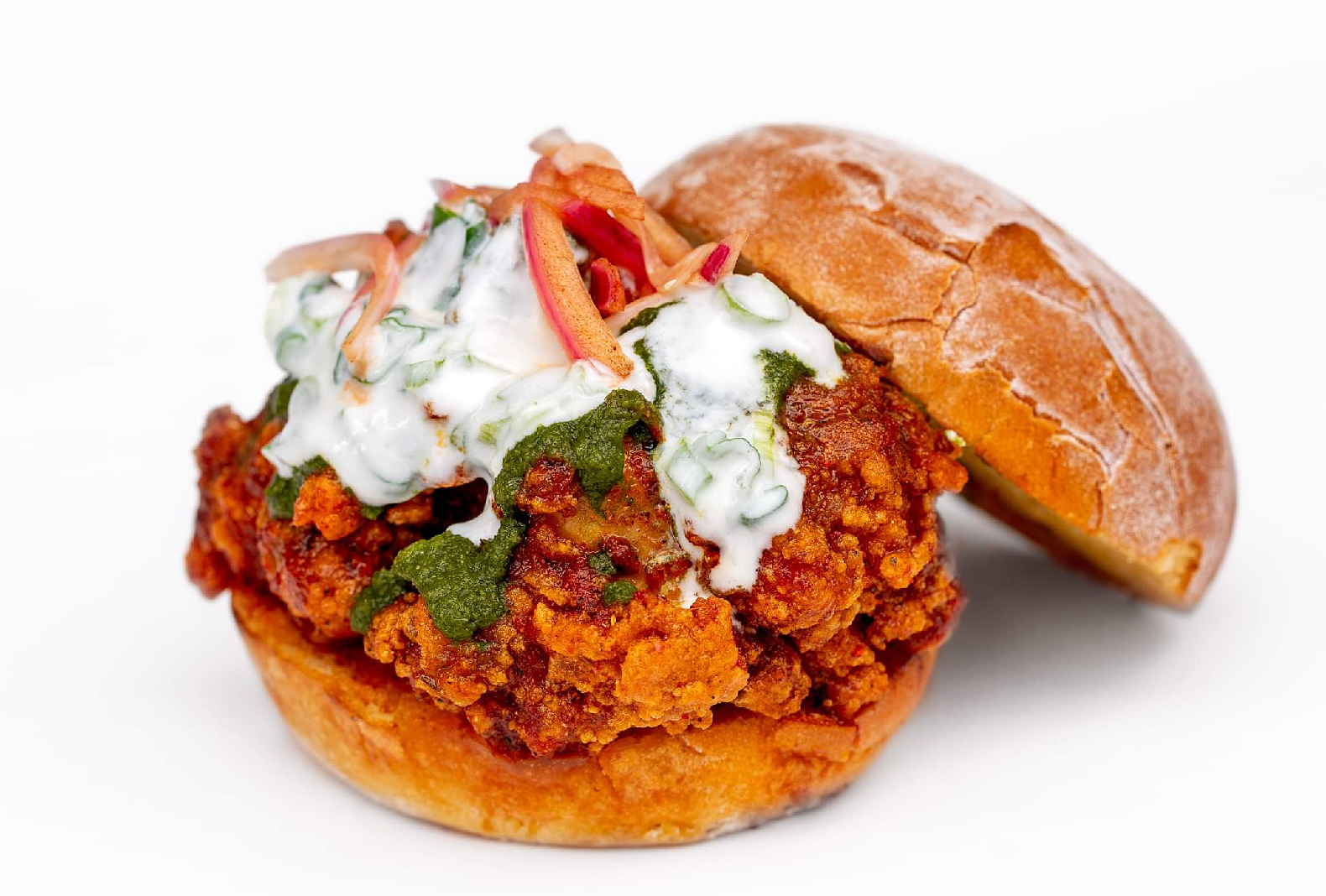 Unapologetic Foods currently operates four restaurants, all in New York City: Rowdy Rooster, the casual Indian cantina Adda, Semma which focuses on South Indian cuisine, and Dhamaka, a hit restaurant that opened in 2021 and features regional dishes rarely found in other parts of India, let alone the United States. It also operates the delivery-only concept Biryani Bol. In about a month and a half, Mazumdar and Pandya will open a new version of the Indian comfort food restaurant Masalawala, which had long operated in Manhattan, in Brooklyn. After that, the plan is to open Kebabwala, a concept focusing on various approaches in India to grilling meat.

Ever busy, Mazumdar and Pandya remain motivated by their efforts to change American cuisine. They hope that their variegated explorations of Indian culinary traditions inspire a movement of chefs from every background, all approaching their own ancestral cuisines with, in Mazumdar’s words, “authenticity and integrity.”

“It is exhausting, but I think it's also exhilarating. I think that's really what keeps us going,” Mazumdar said. “If we can really move the needle a little bit, maybe a whole new generation is going to look back and say, ‘Wow, this is where changes were actually happening.’ And it might open up more doors for ourselves, for other people, for a whole new generation coming up. And I think that's really the incentive. That's the excitement about creating these new concepts.”