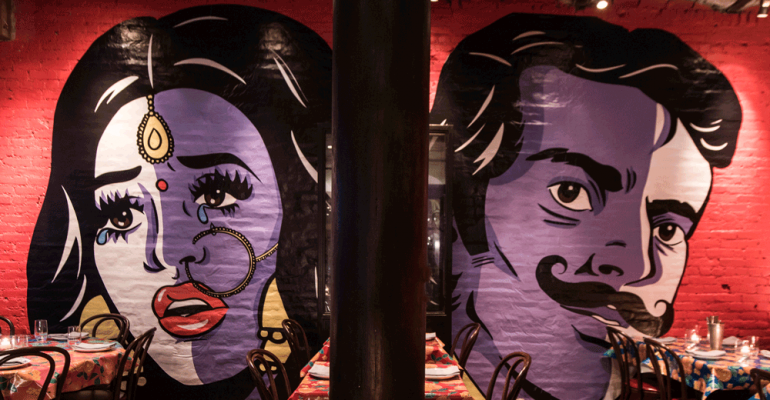 Chef Floyd Cardoz, a respected Indian chef with a decorated culinary career working with the likes of Gray Kunz and Danny Meyer and opening The Bombay Canteen in Mumbai, India, started Paowalla, a New York City restaurant, in 2016. The concept celebrated modern Indian cuisine, but Cardoz felt that it was a bit too formal and lacked the same warmth and energy of his Indian restaurants. He set out to transform Paowalla into a lively and casual place with authentic Indian soul food —The Bombay Bread Bar.

In order to complete the transition of Paowalla into The Bombay Bread Bar, Cardoz partnered with Kris Moran to give the space a completely new look. Moran is a set decorator, production designer and art director whose seasoned resume includes Wes Anderson’s films “The Darjeeling Limited,” “Moonrise Kingdom” and “The Life Aquatic with Steve Zissou” and Martin Scorsese’s film “The Wolf of Wall Street.” She took on the challenge of reimagining Paowalla’s old design into the colorful, cinematic and India-inspired aesthetics of The Bombay Bread Bar — in the span of a month.

The Bombay Bread Bar opened on Feb. 27 with vibrant visuals that could easily belong in the background of a film. See the new space.