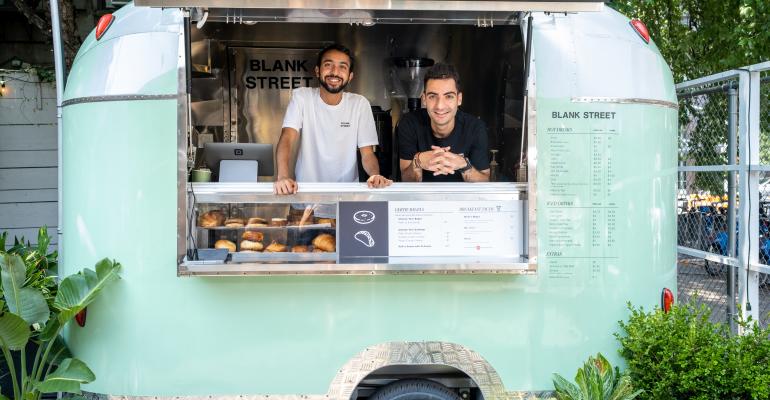 Lanna Apisukh
Blank Street serves coffee out of retro carts: a cross between a food truck and a mobile cart.
Trends>New Restaurant Concepts

Following a $7 million seed fundraiser earlier this year, this round, the funds will be used to help realize Blank Street’s ambitious growth plans of opening 100 locations in New York City by 2022.

Blank Street opened its first location (a mobile coffee cart) in Williamsburg, Brooklyn in August 2020 and quickly expanded by 13 more locations throughout New York City, with a mix of coffee carts and what they call micro retail locations that are about one-quarter the size of an average café. The mobile carts operate in partnership with EV Foods, producing zero gas emissions and zero noise pollution.

“Our big idea was to shrink our location footprint to save money on real estate to invest in other places, like quality products at lower prices and new technology to increase speed and convenience,” Vinay Menda, cofounder of Blank Street Coffee told Restaurant Hospitality. “What makes our model work is density.”

“Our goal is to have multiple locations in one neighborhood, versus just one, to increase our brand awareness,” Menda said.

This latest round of funding will do more than just allow for major retail expansion: Blank Street is also debuting its wholesale retail partnership program called “Powered by Blank Street,” which will allow retailers to sell their products without having to build a new storefront. They will be debuting this partnership with King David Tacos. “KDT Powered by Blank Street” mobile carts will be rolling into multiple New York City neighborhoods, selling both KDT’s popular breakfast tacos alongside Blank Street coffee.

Blank Street has already embraced an on-the-go experience with an order-ahead, mobile payment and rewards app, which they say accounts for 20% of transactions. With the latest round of funding, they expect to expand their app’s capabilities as more local vendors come on board.