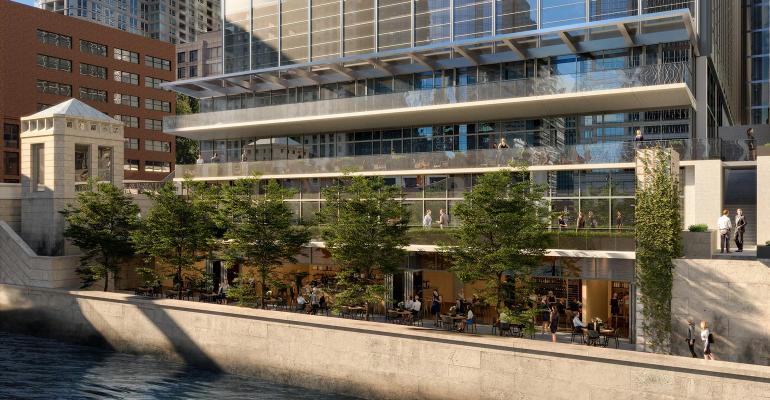 Melman siblings and partners to open RPM On The Water

The children of Lettuce Entertain You Enterprises, or LEYE, founder Richard Melman plan to launch a new four-story restaurant and event space on the Chicago riverfront next year.

RPM On The Water is scheduled to open in summer 2019 and will be part of a $50 million building upgrade with real estate developers Hines, Levy Family Partners, Diversified and American Realty Advisors.

It’s the fourth collaboration between partners Bill and Giuliana Rancic along with siblings R.J., Jerrod and Molly Melman, and LEYE chef Doug Psaltis. The group also operates RPM Steak in Chicago and RPM Italian in Chicago and Washington, D.C.

Bill Rancic is known for appearing on the TV show “The Apprentice.” He and wife Giuliana Rancic, a former E! Network host, also appeared in the reality show “Giuliana and Bill” and other programs.

RPM On The Water will overlook Chicago’s central business district in the River North neighborhood. The concept will house three separate venues, including an upscale bi-level restaurant, a private events space and an as-yet-unnamed casual concept, each with outdoor areas and views of the river. There will also be boat slips available for those arriving on the water.

The venue will be designed to host parties, banquets and customized weddings with guest counts ranging from eight to more than 300, according to press materials.

“This latest restaurant in the RPM family will focus on high-quality seafood and more, in addition to the exceptional wine program and impeccable service for which the brand is known,” said Bill Rancic in a statement.