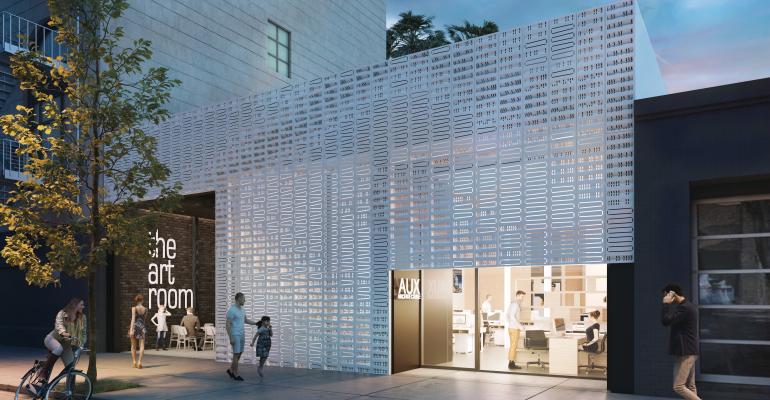 The upcoming concept The Art Room will tap the underemployed and create a nurturing, positive culture of wage equity and retention

Chef D. Brandon Walker wants to change the restaurant industry, but not with his cooking, with his ideas on how maintain a thriving work environment that supports its workers, gives back to the community and creates a space for people grow.

Walker is scheduled in March to debut The Art Room, an all-day fast-casual concept in downtown Los Angeles. There, the chef plans to create a positive and nurturing environment that will tap the underemployed — those who may need a second-chance opportunity.

His last ventures include Los Angeles concepts The MV Grab & Go and a high-end restaurant called The Mar Vista, though the latter is currently closed. He also served previously as the executive chef at Bread and Roses Café. And in 2013, he took home the championship from the Food Network’s “Chopped.”

But, before opening his own businesses, Walker also worked at the St. Joseph Center running a culinary training program for struggling men and women.

In this interview with Restaurant Hospitality, Walker shares his vision for the new restaurant and how he hopes to be a force for change.

The Art Room is described as an "art-meets-hospitality, elevated, fast-casual concept," can you explain that?

The Art Room brings together two sensory mediums, taste and visual stimulus. The concept will include rotating art exhibits and tasting menus, which will constantly keep The Art Room fresh and engaging for visitors to the space visit after visit.

I think the most interactive phase is when we do the tasting menu. We are basically a fast-casual restaurant, but there will be an option of doing an elevated dining experience in the gallery. The gallery, which changes its art every six week, will influence the visual plating. Just like the seasons can inspire, the resident artist can have that influence. During these dinners is where you are going to see the greatest confluence of the two mediums.

With so many restaurants struggling for staffing and supplies, why are you launching it now?

Now is the perfect time for a space like The Art Room. We have incorporated some post-pandemic design features and practices with the new concept, which can start bringing people back together safely, after all this time apart.

What are some of these design features?

For instance, we have the ability to make our dining room completely indoor or outdoor with a sliding glass wall. If you think about traditional shop glass that opens, with full light, it's like that, but on tracks that click. We can literally pick up the furniture and click it out to the street to completely enclose the design space. Or move furniture toward the counter and open it up, making it totally outside.

How do you source culinary talent?

I ran the non-profit food service of St. Joseph Center for 10 years before I started opening restaurants. That's a big part of my background. I graduated 1,200 students when I was teacher. So many of those guys worked with me on many businesses. I had up to eight of those guys, former graduates, at The Mar Vista. I still retain a lot of those guys today. [For The Art Room] I just reconnected with the St. Joseph Center and I am meeting a whole crop of graduates coming out of [20]19 and [20]20. [The school] was interrupted by COVID.

I have eight positions to fill from these graduates. I am also working with the Weingart Center, another non-profit downtown, who work with people experiencing homelessness. We are giving these places equal time and opportunity in the employment process.

You said this new concept is creating more space for Black and people of color in the culinary industry, how?

As a Black chef, I am very sensitive to this issue. This is, in part, why I am excited about being in downtown LA. I hope to draw a lot of talent from the largely people of color community, which resides in the surrounding areas.

What is the restaurant industry like for you right now?

Post COVID, when we look back on what we learned and what happened in the industry. A lot of people have left and aren’t returning, hence the staffing crises in late 2020 and early 2021. People were looking at what they were being paid, and hours they had to work and the work-life balance.

They came to the conclusion that working in the industry as it was was not such a great gig. I talked a lot about the toxic management style, the idea that the people in the back of house can't moved to the front of house or management, interact with customers or make tips. I think the industry was evaluated as a whole, and people decided not to go back into that industry.

So, who can restaurants get to work in them?

The restaurant industry needs people to work, and now they, the industry as a whole, may be willing to take a long look at itself and make it a beneficial working environment.  What I have been doing all along [working with the underemployed] is now a perfect fit. These are folks in desperate needs of jobs. They have been incarcerated, are just out of rehab, dealing with addiction or homelessness. They need jobs and they weren’t really considered until there was a labor crisis. I think if everyone is willing to give a bit, it could be a model moving forward.

What are the main goals of creating The Art Room?

With this new concept, we aim to prove that a positive and nurturing work environment does not come at the cost of profits.

How are you doing this?

When you think of the restaurant business, traditionally there are all these costs and they go into margins. We need to reallocate tips, renegotiate with landlords [for lower rents] and lower the overall expectations.

As pay goes up, and it needs to go up to what's referred to as a living wage, and if you want to pay a living wage in LA, you're talking $20 an hour. The minimum wage is up to $15, which was official three years ago, ahead of the nation. When we were first talking about this in LA five or six years ago, people were freaking out and said you can't make any money. Turns out there are a lot of ways to cut costs.

Landlords are willing to make deals and lower rents as part of this scenario. After COVID, landlords were like, ‘No one is paying me and this space is worthless if no one is there.’ If nobody can operate in there because they can't make money, it's worthless. They are realizing rents have to be a lower part of the operational cost.

There are ways to save money in keeping your food costs down. There's a lot of different ways to source ingredients that can be cheaper. Stay away from larger purveyors that charge top dollar and have minimums. Go smaller, use what we call pickers, who are people who go to stores and farms and pick things up. There are a lot of smaller companies doing this.

Then, change people's expectations. Getting away from fine dining and creating that next fancy thing, that, of course, raises the costs. By keeping it more casual and accessible to people, it helps keep the food cost downs.

Finally, by going toward this universal tip policy, which I am operating exclusively under. This means everyone, front and back, share equally in the tips. We take all the tips in any given shift and anyone involved gets a cut. On average, I pay them $17 to $20 an hour. And with the tips they make between $21 and $25 an hour. By doing universal tips, the front is getting a little less, but the back is getting a lot more.

Everyone should do that.

It took a long time to figure out. People lost their sh*t. They want to pay their dishwasher $9 an hour, but that's why you have 10 dishwashers in a month, no one wants to do that job for that little pay. And why is the server making 60K and the kitchen guy 20K?

Speaking of food and food costs, will you be utilizing local food at The Art Room?

Yes. We will be sourcing our produce, whenever possible, from urban farms such as Alma Backyard Farms. This concept is inspired by the voices and ideas shared by juvenile offenders and prisoners eager to transform their lives and communities by "giving back" to the communities they "took from" and were taken away from. They give the opportunity for incarcerated folk to work the farm as part of their work release and part of their parole. Plus, there's something [healing] about being outside and working with the land and seeing things grow.

Anything else in the works?

I think the entire industry needs a healing, and I think this is the model for the future. This is how we think of the restaurant and hospitality industry as a great job again. It used to be a great job 50 or 60 years ago. People worked in restaurants their entire careers. But now, it's been so transient, and after COVID, we couldn’t get anyone to work.

Models like this are what is going to sustain the workforce of the hospitably industry for years to come. This is one of those industries that won't be replaced by robots. We are still really far from having a robot do all these things in the kitchen and in the front of house that people do.