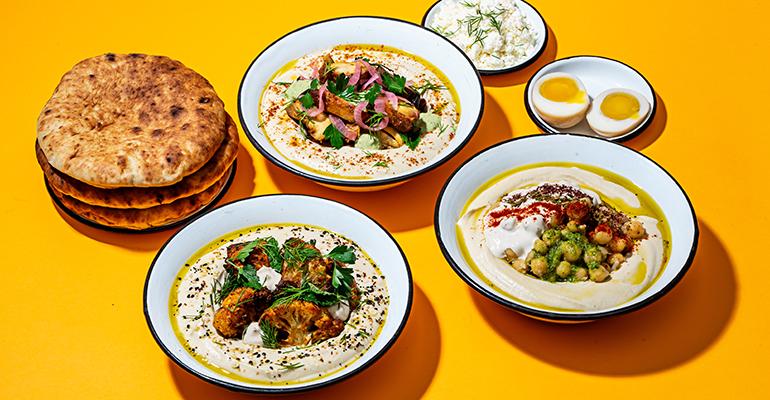 Dave Wiseman, one of the co-founders of hummus concept Little Sesame, believes in the company’s mission: promoting chickpeas and their many uses.

“[I’m] happy to spread the gospel of the power of chickpeas to combat climate change and as an alternative protein source,” he told Restaurant Hospitality.

Spreading the chickpea gospel just got a bit easier: The Washington D.C.-based concept just announced its first unit outside of the D.C. area in Bethesda, Md., in August to bring the fast-casual concept’s unit total to three.

Part of the mission of Little Sesame is to ensure the ingredients it sources are environmentally friendly.

Little Sesame sources all its chickpeas from a single farmer in Montana.

“It’s important to us to support small farmers’ regenerative agriculture, and we know [where our] chickpeas [are] coming from,” said Wiseman.

Despite the focus on chickpeas and hummus, the restaurant is not vegetarian or vegan.

“We’re not a vegan restaurant, we don’t think we need necessarily to eliminate meat. But if we sell a rotisserie chicken dinner and we sell it with humus, a family of four can go from eating five or six ounces of chicken to three to four,” said Wiseman. “Replacing that with healthy climate friendly proteins [is] going to make a big impact.”

Spreading the message of chickpeas became crucial when restaurants were forced to close in March of 2020.

While restaurants were closed last year due to COVID, Little Sesame worked to develop its line of consumer-packaged hummus, which launched earlier this year and is currently available at Whole Foods.

“We really wanted to continue to have that relationship directly with our customer [while] they were at home, it was a good time to launch a consumer package,” said Wiseman.