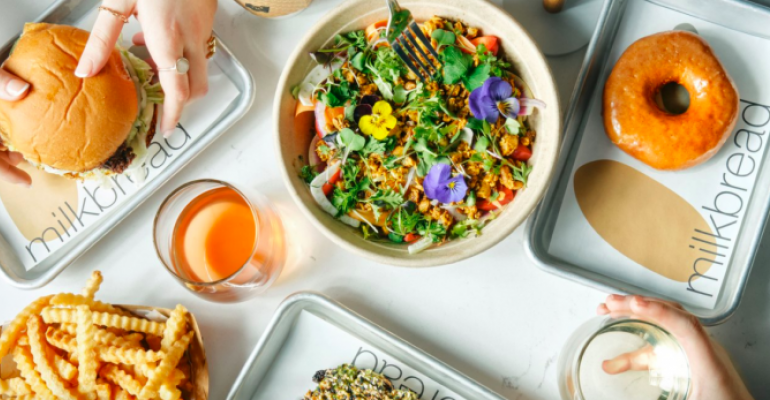 Milkbread
Milkbread offers signature doughnuts as well as salads and a fried chicken sandwich, among other items.
Trends>New Restaurant Concepts

The Davidson, N.C., based group has a smaller venue planned for Charlotte

Joe and Katy Kindred have built on their success in the Davidson, N.C., area with the recent opening of Milkbread, a café open from 7 a.m. to 9 p.m.

The husband-and-wife team opened Kindred in 2015 in downtown Davidson, about 20 miles from Charlotte, showcasing chef Joe Kindred’s cuisine. They followed that with Hello, Sailor, a lakeside restaurant with a modern fish camp theme, in 2018.

Katy Kindred overseas the front of the house of the restaurants, as well as their design and wine lists.

Named after the milk bread rolls that developed a major following at Kindred, Milkbread’s main draw is its doughnut, a fluffy, yeasty pastry made with a milky batter that’s available as a plain glazed or chocolate treat.

The café also offers salads, toasts, bowls and fried chicken, plus a full coffee and espresso selection and soft drinks that are served all day. A rotating selection of wine and beer from small producers is available in the evening.

Prices range from $2 for a glazed doughnut to $20 for a dozen, $7 to $13 for toasts (topped with avocado spread, ham & cheese, Nutella and other options) and biscuits, $10 to $15 for grain bowls and salads, and $5 to $11 for various forms of fried chicken, including the Hot Dip, a sandwich with hot sauce-dipped fried chicken on a potato bread bun.

The concept for Milkbread began when the pandemic hit in March 2020. The Kindred team rallied with the community and developed a menu that would fare well as takeout. They also partnered with local brand Summit coffee to serve doughnuts out of its drive-thru window.

In addition to the doughnuts, crispy chicken sandwiches and a rotation of small production independent wines that were hard to find locally at the time were the biggest hits - these same items have now found a permanent home at the cafe.

“This concept has been in the works for quite some time,” Katy Kindred said shortly before the restaurant opened. “We are eager to gather our community into our sunny new place that was conceptualized during a dark time in our world.”

Located down the street from Kindred, the 3,200-square-foot-space features a clean design and minimalist decor. Its fast-casual format offers counter service for on-premises indoor and outdoor dining as well as takeout. Delivery is also available.

Community remains a big focus at Milkbread through partnerships with fellow local small businesses, including its co-branded house coffee, espresso and cold brew from Summit Coffee, an iced latte by HEX Coffee and sourdoughs from Verdant Bread.

Another Milkbread location is already in the works. It’s slated to open in Plaza Midwood in Charlotte later this year in an iconic Dairy Queen building that will be restored by the team. With a smaller footprint than the Davidson spot, the Kindreds will prepare doughnuts and other items at the original location to sell through a walk-up window at the new spot.