Kevin Meehan spent three years “like a gypsy” hosting roving underground dinners with a business he called Kali Dining in and around Los Angeles. But throughout that time, he was really looking for a home for the restaurant he was developing with business partner Drew Langley.

“It was like Goldilocks syndrome,” he said. “Everything was either too big or too small or too expensive or had no beer and wine license.”

Finally the partners found the right spot in the city’s Larchmont Village, and Kali opened in late January.

It’s a first restaurant for Meehan, who seven years working with Patina Restaurant Group at the restaurants Patina and Café Pinot.

Meehan and Langley, who worked previously as wine director at the Michael Cimarusti restaurant Providence, met when they both worked at the former Los Angeles institution L’Orangerie and subsequently at the now-defunct restaurants Bastide and Citrine.

Kali aims for Michelin-level cuisine in what Meehan hopes will be more of a neighborhood spot.

“I’ve always had a passion for fine dining food and we wanted to do something of that caliber to showcase our skills,” he said. “But it’s not just a special occasion place.”

The menu focuses on California cuisine with a daily wine list that will emphasize the Central Coast, alongside rare and small production bottles sourced from private collectors.

Here’s a look at the new Kali.

For a first course, charred avocado meets shaved vegetables, kale and pistachios with a touch of ash.

A hangout for locals
Rachel Jacobson

The 2,000-square-foot restaurant seats 65 and includes a 16-seat L-shaped bar. The kitchen is rimmed by an exposed refrigerator cooler of hanging ducks.

Chef Kevin Meehan (right), previously of Patina Restaurant Group, met drew Langley when both worked at the restaurant L’Orangerie, beginning in 2001. Before opening Kali, Langley was the wine director at Providence.

Squab is served with carrots, honey and lavender.

For dessert, Meehan fashioned a toasted meringue gelato made with Strauss cream. Shaved on top is a house-cured egg yolk that offers a sweet-and-salty texture. “It’s two-dimensional,” he says. “It has a really decadent, rich mouthfeel.”

Kali uses Flannery beef, which Meehan considers one of the best meats available in the U.S., though the restaurant aims for accessible pricing, with entrees ranging from $30 to $34.

“If anything, I may lose money on some of my proteins, but I can make it up with the bar,” Meehan explains. “The restaurants to the left and right of me, we’re cheaper than them. But we’re not the cheapest restaurant. Once you make it affordable and pride yourself on that, you need to deliver.” 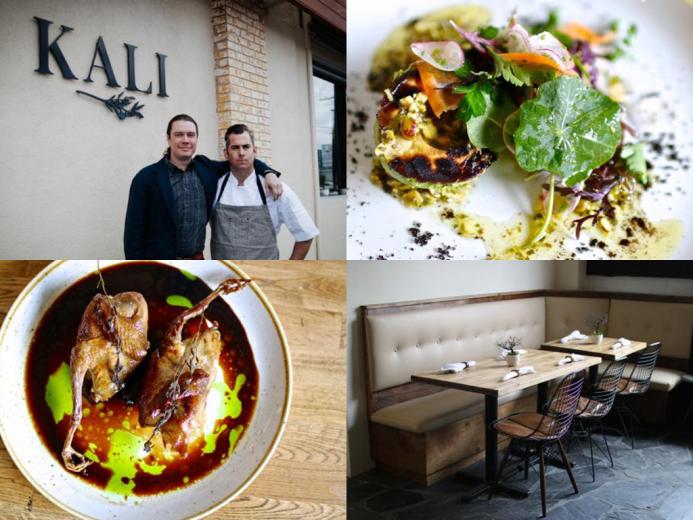