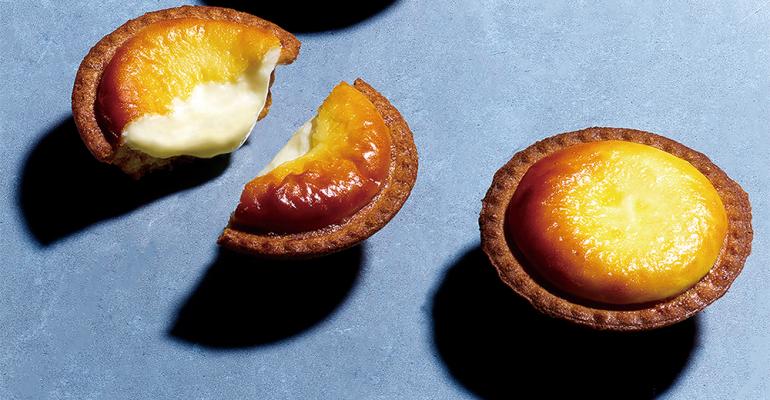 The tarts are filled with velvety mousse made from three different types of cream cheese.
Trends>New Restaurant Concepts

The popular dessert concept will open the first of 50 planned U.S. units in San Francisco

Bake Cheese Tart, a Japanese dessert concept with outlets mostly concentrated in Asia, is slated to open its first U.S. restaurant next month in San Francisco.

The 47-unit chain from Japan, which has at least one copycat in the U.S., plans to open up to 50 domestic shops. Bake’s petite, creamy, tart-like pastries, made with a shortbread-cookie-style crust, are considered artisanal delicacies in Japan. The first shop opened to wild success in Hokkaido, in 2013.

Bake CEO Shuhei Nishio said the company sources the finest ingredients to make its pastries, which contain a velvety mousse filling made from three different types of cream cheese.

“We have an unrivaled passion for pastries,” Nishio said in a statement.

The tarts are made with a double-baked crust and come in a variety of flavors, such as chocolate and honey lemon. Overseas shops also sell coffee and soft-serve ice cream cones.

“Our U.S. stores will sell cheese tarts and coffee as mainstays,” the company said.

To maintain consistency and keep up with demand, U.S. units will import frozen tarts from the company’s home base in Japan. According to Bake’s website, customers can eat the tarts fresh, frozen, chilled or reheated in a toaster oven.

Bake’s 48th location will open on May 4 in San Francisco. The 572-square-foot café will be part of Westfield San Francisco Centre, a large shopping center on the city’s iconic Market Street.

Last year, a similar concept dubbed Bear Cheese Tart opened at a food hall in Tustin, Calif. Its menu features a variety of seasonal flavors (pictured below), including original cheese tart (also a made with a three-cheese blend), mango, chocolate and blueberry. When it opened, the center developer claimed it was among the first to bring the popular Hokkaido-style baked cheese tarts to area.