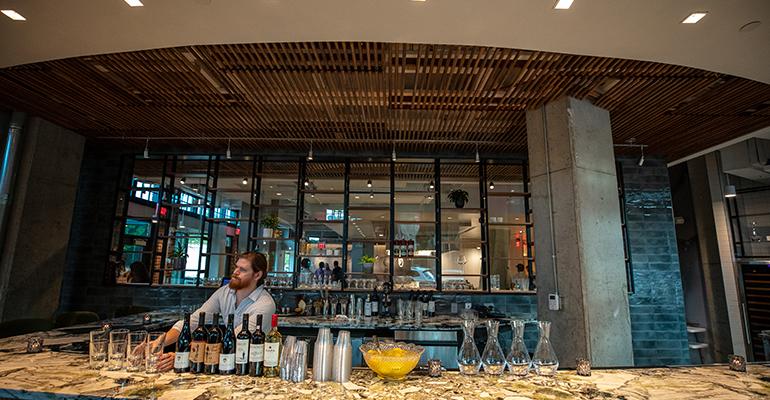 James Beard Rising Star Chef award semifinalist Kevin Tien has a story for nearly every aspect of his upcoming Washington, D.C. restaurant Emilie’s, from the name of the restaurant (a nod to his fiancée by the same name and a late close family friend’s daughter) to specific recipes and dishes reflecting cultural pinpoints of his childhood.

Emilie’s, scheduled to open on Oct. 10, features a playful juxtaposition of dim sum-style carts and family-style portion sizes. The carts won’t necessarily feature typical dim sum dishes but there will be a dips-and-spreads cart featuring different butters, spreads and preserves for use with housemade bread; as well as a pickled and fermented cart, and a third pastry cart with whimsical takes on classic desserts, like jelly doughnuts and milk and cookies.

Some of the larger plate dishes on the menu include his take on Southern fried chicken, a nod to his fiancée’s grandmother’s recipe, and a whole grilled fish, complete with shareable dipping sauces, which reminds Tien of his family going out to eat late at night in Los Angeles after they first moved to the United States from China.

“Everyone keeps asking about the menu and what it’s going to be,” Tien said. “But we’re not doing a particular region or type of food. My only criterion is: does it taste good and why are you attached to this dish? We’re looking for that ‘Ratatouille’ moment when you take a bite of something and it takes you straight back to your childhood.”

For example, although the whole fish was inspired by Tien’s Chinese American background, the dipping sauces were created with one of his Korean chefs in mind, with flavors like chile and sesame oil.

The 5,175-square-foot restaurant designed by HapstakDemetriou+ is inspired in part by Tien’s German-American family friends who became “like a second family” to him and introduced him and his siblings to the idea of Christmas and American culture.

“They helped us get settled into American customs and we likewise shared cultures,” Tien said. “For example, we used to share dim sum with them.”

Although chef Tien’s family friend passed away two years ago, his memory lives on in the form of the community and togetherness aspect of the restaurant. In order to raise enough money to get off the ground, Tien — in partnership with restaurateur Sam Shoja, restaurant veteran Arris Noble, and inKind’s Johann Moonesinghe — has implemented a community investment goal through the form of “house accounts.”

inKind is a restaurant financing business that helps independent restaurant use house accounts to help fund the business.

The house accounts allow community members to “buy into” Emilie’s by purchasing $500, $1,000 or $2,500 worth of pre-paid meals. In return customers will receive free credit that goes up in increments the more the customer invests. For example, if you invest $1,000, you will get $1,200 in meal credits. The paid portion never expires, and diners can use it toward food, drink, and alcohol purchases.

This tactic has allowed Tien to raise $500,000 upfront to pay for the increasingly exorbitant costs of getting a restaurant off the ground.

“It gives everyone in the neighborhood a chance to help support a local business,” Tien said. “Without their help and the help of my partner Sam this restaurant would never have gotten off the ground.”

Here’s a look inside Emilie’s: