Scott Conant is known for his restaurants in New York City and the Phoenix area (and his role as a “Chopped” judge on the Food Network), and now he’s brought his Americano concept from Scottsdale, Ariz., to Atlanta’s upscale Buckhead neighborhood. It opened May 23 at the InterContinental Buckhead Hotel, taking over Art Smith’s restaurant, Southern Art. The space has been updated with modern décor, muted gray tones and gold chandeliers.

Bone-in ribeye at The Americano

Open for dinner only, The Americano features freshly made pastas, steaks and Mediterranean seafood, plus a wine list of more than 200 bottles. Dishes include a burrata and pea salad, potato gnocchi with black truffles, roasted black cod, and a $155 45-ounce bone-in ribeye. Steaks can be topped with one of four sauces, including salsa verde and a truffle jus.

Klaw has taken over the nearly century-old Miami Women’s Club, rehabbing three floors of the space into a 14,800-square-foot restaurant with a dining room, two private dining rooms and an airy rooftop bar stocked with green plants that looks over Biscayne Bay. Open since June 3, it comes from Misha Gelman, the founder of popular London restaurants like Burger & Lobster, Zelman Meats and Beast.

The rooftop bar at Klaw

The menu is focused on surf and turf, with the former starring Norwegian king crabs, which are displayed in custom-built tanks, plus scallops and oysters. The turf portion of the menu includes prime cuts of black Angus beef from Nebraska as well as local beef from Florida ranches. All that is paired with plenty to drink, including craft cocktails and a 250-strong wine list.

Ravello is the latest project from Vintage Hospitality Group, the outfit behind other Montgomery restaurants, including the upscale Vintage Year and the casual Vintage Café. Led by Jed Blount and chef Eric Rivera, it opened at the end of May in downtown, pairing authentic Italian dishes with local southern ingredients.

The restaurant inhabits a restored 1920s-era federal bank building, has 150 seats and is open for dinner only. The menu draws inspiration from the Amalfi coast of Italy and is broken into sections that highlight shareable seafood crudo and antipasti, salads and pastas as well as entrées and sides. Dishes include red snapper crudo with lemon granita and basil, pasta cacio e pepe, roasted branzino and a 32-ounce bistecca alla Fiorentina.

Claudia de Murga founded Atípico in Mexico City in 2018 with the motto, “stay original + be different.” With two locations in Mexico’s capital now under her belt, she’s expanding to the United States, making Dallas the restaurant’s first stateside home. The restaurant is slated to open later in June at the Union, a mixed-use development that straddles Uptown and Downtown.

Eggs in a jar at Atípico

The menu is inspired by the unique tastes and preferences of de Murga’s six daughters, and it features an eclectic mix of dishes that consider several diets and lifestyles, including vegan and gluten-free. Fruit-packed bowls and toasts anchor the breakfast menu, plus unique egg preparations, like eggs in a jar with tomato and béchamel sauces. Dinner sees items like octopus salad, coconut ceviche tacos and a lobster roll.

Co-founders Jon D’Angelica and Ryan Vance opened the first District 15 years ago in San Francisco before expanding to Oakland and San Jose. On May 6, they opened the doors to their first location outside California, choosing a 3,800 square foot space in Addison along a popular dining and nightlife strip. The casual dining room is lined with exposed brick and features wooden tables and a horseshoe-shaped bar.

Marmo is a new Italian chophouse from Atlas Restaurant Group. Atlas, which operates a large stable of restaurants in Baltimore, also counts two other Houston spots on its roster — Loch Bar and Ouzo Bay. Marmo opened in early April, with a 120-seat dining room and patio that looks onto Westheimer Road, a buzzy street housing some of Houston’s most exciting dining concepts.

Marmo, which means “marble” in Italian, is open for lunch and dinner. Its menu features hand-rolled pastas, house-made charcuterie, and prime steaks, plus a wine list that highlights Italian varietals. The steaks include a $150 42-ounce porterhouse that’s dry-aged for 45 days, plus Japanese A5 wagyu available in 3-ounce minimums at market price. 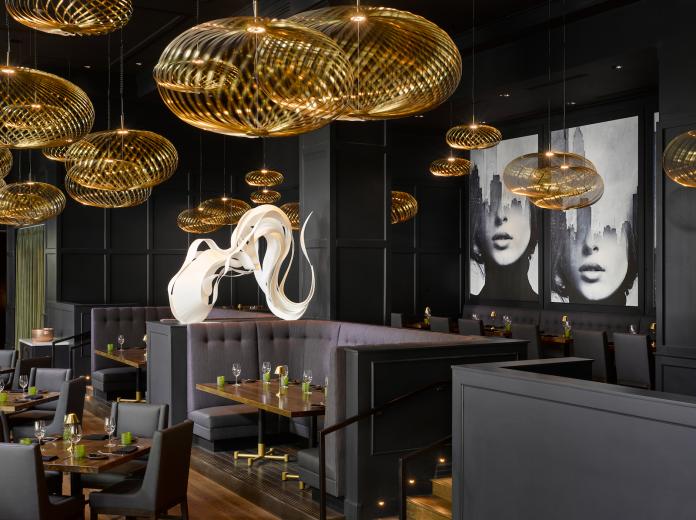