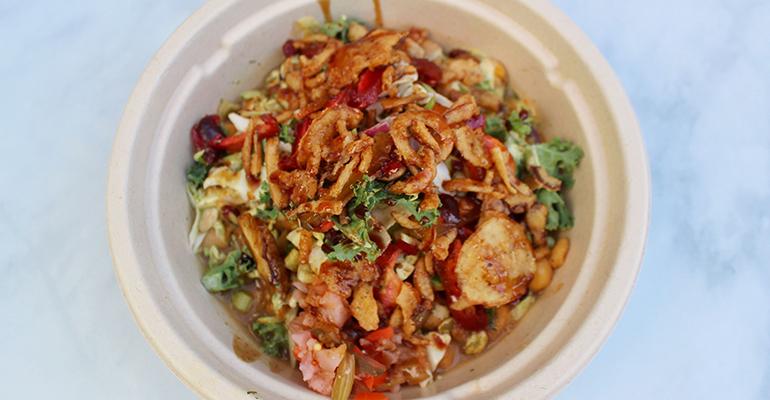 Humble chickpea to be flavorful star of Bowlila in Los Angeles

Hoping chickpeas will become the next cauliflower, two celebrity chefs from the Middle East are planning to launch a new bowl concept out of a ghost kitchen in Los Angeles that taps into the plant-based, low-carbon-footprint fast-food movement.

Badr Fayez, a Saudi chef who was a judge on “Master Chef Arabia,” has partnered with Adlah Al-Sharhan, a celebrity chef from Kuwait, to launch Bowlila in March. The two appeared together on the Arabic version of the BBC adventure-cooking show “No Kitchen Required.”

Related: The return of the salad bar

Rather than launch with a brick-and-mortar location, Bowlila will be based out of the Colony ghost kitchen in West Los Angeles, home to 26 kitchens with various brands available for delivery and pick up, and there’s a small communal dining area. Guests can order at Colony through the kiosks, or online through all the third-party marketplaces for delivery.

Bowlila will also have an electric bicycle cart that will serve up its globally flavored chickpea bowls from different locations across LA’s west side.

The goal is to build a brand around chickpeas as a healthful and low-carbon protein. As consumers become more concerned about the impact on the planet of raising animals for meat and dairy, pulses like chickpeas are hailed as a more planet-friendly protein source, using less land and water than the more common soy beans, Al-Sharhan said.

And chickpeas are incredibly versatile.

Al-Sharhan said she developed the menu around a common street snack, which in Kuwait is called “nikhi” — “It’s like the Middle Eastern ramen,” she said — simmered in huge cauldrons. But in Saudi Arabia is called “balila.”

For Bowlila, she borrows from various cultures to create uniquely flavorful bowls, and guests can also build their own.

“I want to show people the humble chickpea can be more than it is. It’s Cinderella, once you dress it up,” Al-Sharhan said.

Bowlila offers 11 versions of bowls, which range from $13 to $15, many of them topped with crunchy fried onions. The Persian bowl, for example, uses almond yogurt, sour barberries (which are common in Persian cuisine), fresh dill and mint and pickled vegetables. The Thai bowl is spiked with lemon grass-ginger broth, garlic, habanero chiles, mango and lime-macerated jicama.

An Italian bowl includes pesto (made with nutritional yeast instead of parmesan to keep it vegan), pepperoncini and tomatoes with fresh greens. And a Japanese version includes house-made furikake, tofu croutons and black and white sesame seeds with a miso-based sauce and pickled ginger.

“The sauces make everything work. We put a lot of work in the sauces,” said Fayez.

At the base are tender, long-simmered chickpeas in a flavorful broth, though there is also the option of edamame. Extra broth can be ordered on the side.

Down the road, she plans to use the aquafaba foam that results from braising the peas for desserts.

Al-Sharhan calls those who love the humble pulse “chickpeeps,” and the brand’s logo includes three little chickpea characters that she hopes will “be as famous as the M&M characters.”