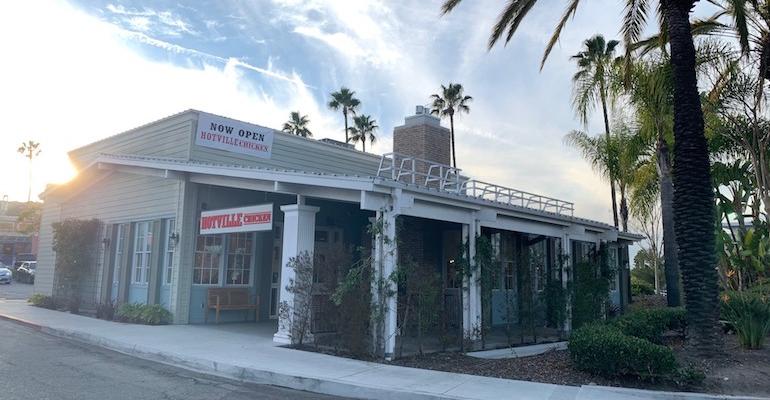 After sparking an avalanche of hot chicken concepts in Los Angeles, the family attributed with giving birth to the spicy Nashville-style movement has finally opened in Southern California.

If there is a royal family in the Nashville hot chicken world, it is the Princes.

The family’s history with the spicy recipes go back to 1936, when Kim Prince’s great-great uncle Thornton Prince and his brothers opened what started as BBQ Hot Chicken Shack. The story goes that Thornton was somewhat of a womanizer and an angry girlfriend sought revenge by making his fried chicken super spicy.

It turned out he loved it and that recipe became the basis for the family’s dining dynasty, which now includes two locations of Prince’s Hot Chicken Shack in Nashville, owned by Kim Prince’s aunt, Andre Prince Jeffries.

Kim Prince, meanwhile, grew up working in the Nashville locations — there were three until one closed after a fire last year. Now with Hotville, she is positioning the brand for a next generation — and a future that might include franchising, more regional menus or potentially retail branding.

“My vision is a little different from what Andre and family in Nashville wanted to do, but I felt like under a new name we could spread our wings and go a little further with it,” she said.

First, Kim Prince said she will nail down the flagship in Los Angeles, which she opened in partnership with Greg Dulan, a member of another family restaurant dynasty who owns three Dulan’s Soul Food restaurants in LA.

After years of saving her pennies and searching for the right location, Kim Prince said the partnership with Dulan was key to navigating Southern California’s complex restaurant world, sourcing and nailing down operational practices like food-cost analysis.

“It turned into a perfect marriage for us to get this particular location, which was already built out and was as turnkey as turnkey can get,” she said, referring to the site in a Baldwin Hills shopping plaza that also includes the high-end restaurant Post & Beam and a Dulan’s nearby. “If I get in a jam, [Dulan’s] crew is right down the street. It reminds me of being home in Tennessee.”

Hotville’s average check is about $17. Kim Prince plans to apply for a beer and wine license in 2020 and hopes to add local craft beers to the menu.

Kim Prince said she is finding that Angelinos have a different palate than Tennesseans. In Los Angeles, most guest prefer mild than hot chicken. And hot fish, made with a crunchy cornmeal batter, isn’t served in Nashville, but it’s hugely popular so far at Hotville. “I can’t keep enough fish in the house,” she said.

Potato salad was also a new addition to the menu. “In a predominantly black community [like Crenshaw,] they would want potato salad, which is a staple in my community. Seniors who come in give me the side eye and say, ‘This potato salad better be right now,’” she laughed. “The reviews have been good. It means a lot to me that they like it.”

Hotville is also playing around with some plant-based options, she said. “But I’m not crazy about how that’s turning out. We’re going to stay in the lab a bit longer on that one.”

In 2016, Kim started doing LA pop ups, and she feels that unleashed demand for Nashville hot chicken across the city, which now boasts more brands that can be counted, from Howlin’ Rays to Dave’s Hot Chicken.

“I don’t know why the fever has spiked the way it has in LA,” she said. “My dad was doing hot chicken at festivals [in Southern California] in the 1980s, and we knew then that it would be a  hit.”

None of the other brands, however, have the pedigree of Hotville, she noted, or the family support. With the voice of her Aunt Andre in her ear, Kim Prince now has her daughter and other family members getting involved in the business.

“The other day, my older brother came in and slapped an apron on and did what we Princes do,” she said.  “We have a long road ahead of us and I’m going to fry every chicken that crosses it.”