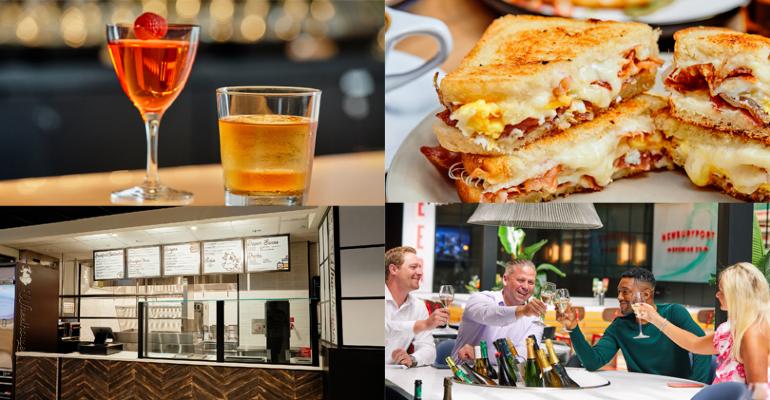 High Street Place, a food hall with 19 restaurant and bar concepts and a convenience store, opened in Boston earlier this month with a multi-vendor ordering system, retractable walls and seating for 400.

Offering breakfast, lunch and dinner Mondays through Saturdays, the food hall aims to appeal not only to office workers in the downtown area, but also to families and tourists.

The food hall opened to a flurry of business. Johnson attributes its early success in part to the end of the mask mandate in Boston.

“I think we hit the timing perfectly,” Johnson said. “The mask mandate ended in Boston on Saturday, and that was the first day that the food hall was open, and it was electric. There was a line around the corner of people waiting to come in and dine with us. It was the same thing Wednesday and Thursday, with the office crowd and then just people that wanted to get their hands on the space.”

The 19 restaurant concepts in the food hall were selected with an eye toward showcasing a wide swathe of Boston’s culinary offerings. For some, like Northeast of the Border, which previously had only operated as a food truck, High Street Place will constitute their first brick-and-mortar location.

According to Johnson, High Street Place distinguishes itself from most other food halls in that all of its vendors offer both food and beverages. Along with the three bars in the food hall — Bubble Bath, Daiquiris and Daisies and Newburyport Brewing — the 16 food concepts offer alcoholic and nonalcoholic beverages that pair with their food menus.

The layout of the food hall is designed for exploration and spontaneous decision-making. It has no directory and instead encourages customers to wander, even to ask strangers what they’re eating or drinking if it catches their eye.

“We're really encouraging community building with the space,” Johnson said. “We want to be that place where people come together, whether it's friends, family or strangers. We want people to meet here at High Street Place and be a part of the downtown Boston community.”

Johnson noted that each vendor was free, within a set of general parameters, to design its own stall to suit its branding.

“It makes it look really unique throughout the space as you travel through, and everybody really stands out in their own way,” she said.

The main dining area, located directly under the atrium, has five communal tables with a total of 72 seats. The seven other indoor dining areas throughout the food hall offer diverse seating options. When the weather gets warmer, a NanaWall will slide open, giving access to the outdoor patio.

High Street Place uses Toast for its point-of-sale system and Bbot for mobile ordering. Bbot will allow customers to order from multiple vendors at once and then scan a QR code at their table, letting delivery runners know where to bring the food when it’s ready.

Johnson highlighted High Street Place’s many uses as an event space. Live music is played Thursday, Friday and Saturday nights, and its 28-foot video wall is set to display March Madness when the tournament begins. Collaborations with the Boston Women’s Market, a Sweat and Sip series and children’s events are also upcoming.

“It's almost like the sky's the limit with this thing,” Johnson said. “We have all the bells and whistles. We have seven zones for sound.  We're connected to not only cable boxes, but Apple TVs. We have immersive technology allowing guests, if they're hosting a presentation, to type in a code and present something right on the screen. Or with BrightSign, you can actually plan a whole presentation and time it out throughout the day to have it be shown on the screen.”

Here's a look at some of the concepts at High Street Place.