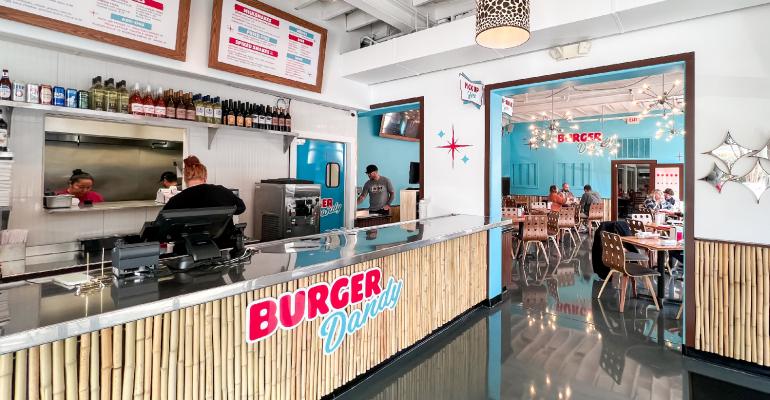 Burger Dandy was one of three ghost kitchen concepts A. Marshall Hospitality launched during the pandemic and ended up being one of the most successful when it first began selling retro shakes and burgers in January 2021.
Trends>New Restaurant Concepts

While virtual restaurants have grown from a buzzworthy trend into a pandemic-era commonality, not many graduate from virtual concept to brick and mortar store. Nashville-based A. Marshall Hospitality opened three virtual restaurant during the pandemic including retro-themed burger shop, Burger Dandy. In January, the restaurant group converted Burger Dandy into a casual-dining restaurant you can visit in real life, not just on a delivery app based on customer demand, and they now do 70% dine-in and 30% takeout orders.

“I see a lot of ghost kitchens, especially ones that celebrities have jumped on,” Lyle, Richardson, COO of A. Marshall Hospitality said. “You know, I see all the celebrities jumping on it. But I don’t see a lot of success stories about turning a ghost kitchen into a brick and mortar restaurant. So we gave it a shot. We took 700 square feet of our existing restaurant, Americana Taphouse, and we designed something special.”

Burger Dandy was one of three ghost kitchen concepts A. Marshall Hospitality launched during the pandemic and ended up being one of the most successful when it first began selling retro shakes and burgers in January 2021. At some point, the popularity of the off-premises-only concept began outselling A. Marshall Hospitality’s brick and mortar restaurants.

“As we progressed, we noticed that more and more of our guests were hanging out in front of the takeout space and getting to know the staff there, so we started to have someone available to speak to when you pick up your food to get that would provide that human contact,” Richardson said. “[…] At some point, we noticed that Burger Dandy sales per square foot were exceeding the potential sales per square foot we had at our existing locations.”

When figuring out how to convert Burger Dandy into a place where people could come to sit down and have a meal, in many ways, Richardson said, it was easier to figure out than making the virtual concept to begin with. The team went for an “Elvis goes out for burgers in Vegas” vibe with a tropical motif and the color scheme of a 1957 Chevy Bel Air car (seafoam green with red accents).

Richardson and his team kept the menu simple: retro burgers and shakes with a Southern flair, including menu items like a slaw dog instead of a regular hot dog, Kool Aid pickles, and Coca-Cola-marinated onions. The menu also has boozy milkshakes and a fried chicken-topped salad.

“Our marketing team was excited to get our hands on [the space] and take Burger Dandy to that next level,” he said. “I think that's also part of the success of the concept, because it did have a physical identity to start with and didn’t just have an anonymous online presence.”

Moving forward, Richardson said the company might take on a food hall concept that would be both brick and mortar and have a virtual, off-premises element, with Burger Dandy and some of the pandemic-era virtual concepts like Nashi Noodles and Fresh 96.