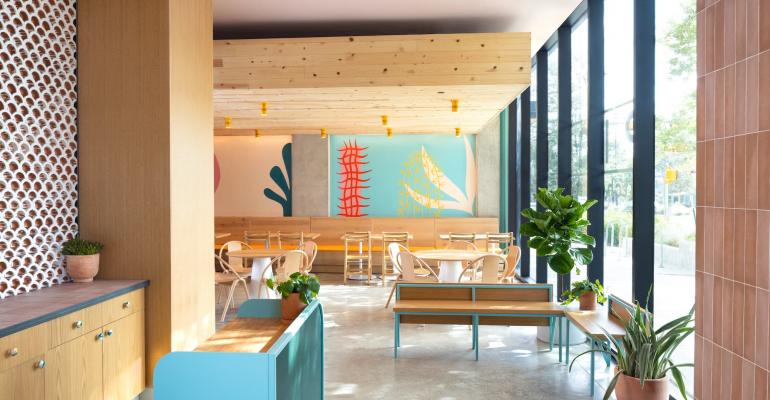 Picnik opens its third location in Austin, and plans expansion into Houston and beyond

When Naomi Seifter founded the Picnik food trailer in Austin, Texas, in 2013, the core mission was to expand the possibilities of what healthy eating looks like, and to show people that food can taste good and be good for you. That philosophy hasn’t changed, but since then, Picnik has traded in its trailer and opened three brick-and-mortar restaurants, the latest debuting in June.

“Picnik is rooted in creating real food and good vibes centered around positive, mindful eating,” said Picnik CEO Dan Mesches. He notes that the food-and-drinks menus are meant to be inclusive for people who want to enjoy “better for you” options that embrace integrity and sustainability, but are also created with a high level of culinary execution.

Popular dishes on the summer menu include the Mediterranean dip trio ($18), Himalayan red rice bowl ($17) and wagyu caponata ($30). Other options include salads, sandwiches and tacos, with many dishes offering adaptogen add-ons, like reishi, lion’s mane and CBD.

The new 3,500-square-foot restaurant sits in Austin’s South First neighborhood and was designed by architecture and design studio HapstakDemetriou. A wall mural depicts colorful Texas landscapes, and the airy interior features white oak and turquoise tiles. The open kitchen gives guests a view of the action from the dining room, and there’s also a patio for outdoor dining.

The location is also the first with a full bar serving beers, wines and cocktails, with the latter featuring functional ingredients, adaptogens and superfoods. The Pitaya Margarita mixes tequila with dragon fruit, lime and honey. The Agua Azul — Picnik’s spin on the popular Ranch Water cocktail — features reposado tequila, aloe liqueur, coconut water, lime and spirulina, which gives the drink a blue hue.

The new location also features a walk-up coffee bar on the side of the restaurant, which is a nod to Picnik’s original trailer. It follows the same healthful and lifestyle-accommodating themes as the restaurant and bar, serving drinks with grass-fed butter and MCT oil, and the go-to sweetener is maple syrup. The most popular drink is the Mayan Mocha, a latte that includes maca, a plant that’s thought to improve mood and reduce anxiety.

“The dream was always to bring Picnik to other cities, as it’s our mission to make inclusive healthy dining accessible to as many people as possible,” said Mesches.

The restaurant is already working on its next location, which will land in Houston’s Montrose neighborhood in late fall of this year.

“We are very excited to open in this food forward city,” added Mesches. He said the restaurant is considering locations in other states, and eventually hopes to open stores nationwide, but they will concentrate early growth in the Austin, Houston, Dallas and Fort Worth markets.