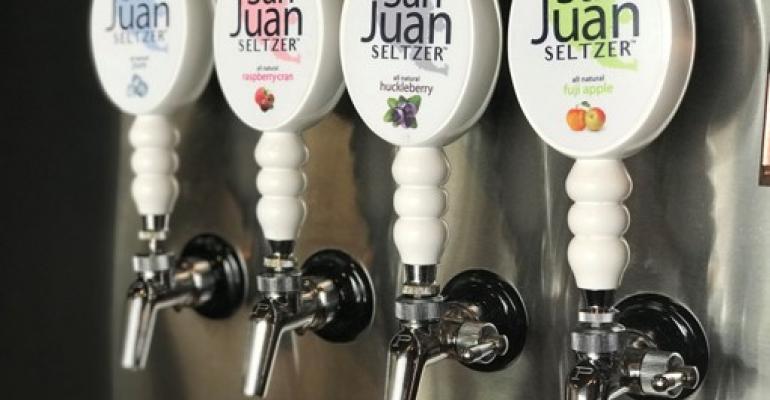 As spiked seltzer brands like White Claw explode in popularity in the grocery aisle and liquor stores, can restaurants and bars cash in on this growing trend? James Beard Award-winning chef and Seattle native Ethan Stowell (owner of Ethan Stowell Restaurants; Ballard Pizza Co., Goldfinch Tavern) has collaborated with spiked seltzer brand San Juan Seltzer to open up a seltzery in downtown Seattle at the end of September called San Juan Seltzery Taproom, Kitchen & Bar – like a working brewery but with hard seltzer created on-site instead of craft brews.

“One of the best things about seltzer is that it can be drank straight or it can act as a decent mixer if people want the flavor without the calories,” Stowell said. “We’re experimenting with both on tap and seltzer cocktails unlike beer which you wouldn’t want to mix usually. The whole theme of the place is this little island vibe with more seafood-centric food, lighter fare that goes with seltzer.”

The taproom and restaurant will also be a family-family concept with an outdoor patio outfitted with heaters and an indoor children’s play area outfitted for the just-shy-of 2,000-square foot space. The working seltzer itself will house a 20-barrel brewhouse with a filling line that can produce 40,000 barrels of spiked seltzer.

For his food menu, Stowell is leaning heavily on the San Juan theme with island eats like steamed clams, smoked salmon, oysters, crab cakes, and fish and chips for an average entrée price of $10-$15. Seltzers available on tap will include all of San Juan’s Pacific Northwest-inspired flavors like Montana-style huckleberry, Fuji apple, and Rainier cherry (named after Mount Rainier) for $6 each, while the cocktails (for $10 each) will be a bit more creative:

“The cocktails could be something as simple as flavoring a vodka soda with huckleberry seltzer or putting a splash of Rainier cherry in a Manhattan since those are natural elements that go together,” Stowell said. “We’re adding a little seltzer to cocktails to liven them up a bit. Like maybe a margarita with the raspberry-cran flavor — something that can give it distinction.”

Since the Seltzery is branded with the San Juan name, the spiked seltzer company is looking to expand the concept in other markets, though there are no specific growth plans in place yet:

“The idea is that after this first one, we will figure out how to put these into different neighborhoods,” Stowell said. “It’s in the same category as beer halls and is meant to be a casual space where people can relax and have food. […] a gather round the fire-type of place.”