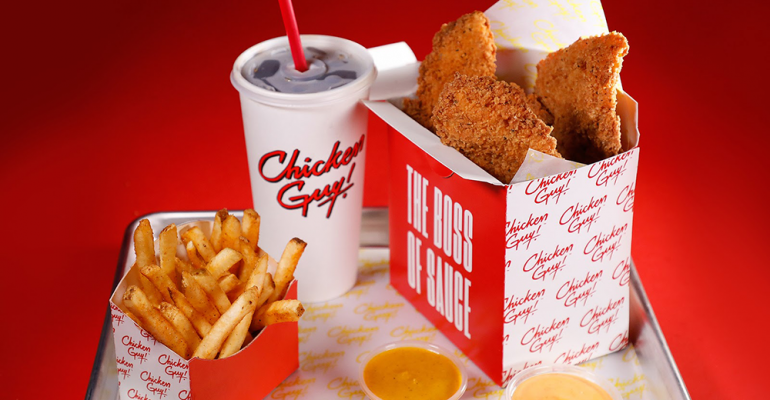 Scheduled to open later this summer, Chicken Guy! will feature hand-pounded chicken tenders, paired with various sauces, for which Fieri is known. The tenders will be grilled or fried, and served straight up on skewers, or as the protein in sandwiches or salad bowls. The chicken will be “antibiotic free” and never frozen, the company said. 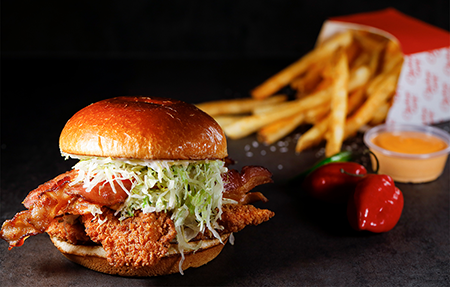 Sides will include fries, macaroni and cheese, fried pickles and slaw, along with Flavortown Frozen Treats, such as the Triple Double Ice Cream with triple chocolate and double mint flavors; or the Cinnamon Apple with vanilla ice cream coated in Apple Jacks cereal.

Earl — whose Earl Enterprises portfolio includes close to 200 restaurants, including the Buca de Beppo, Earl of Sandwich and Bertucci’s chains — said the partnership is the result of work Fieri did last year developing a new menu for the refurbished Planet Hollywood in Orlando.

“I was spending $30 million after a very successful 20 years at Planet Hollywood Disney, and I was upgrading every category, so I wanted to embellish with something Planet had never done before and bring in a celebrity chef,” Earl said. “And the relationship took off. He was amazing. It was like having a movie star in the building. We became friends and we vowed to work together.”

Chicken Guy! was designed to be multiplied, Earl said, but he declined to reveal growth plans going forward.

“I want to have a really successful opening at Disney Springs. We have a knock-out location,” he said. “I think we will grow very rapidly once we’ve tested everything.”

The average check, with a side and beverage, will likely be around $11, said Earl, which he described as “extremely competitive.”

The host of the Food Network’s “Diners, Drive-Ins and Dives” also reportedly has a new taco joint, aptly dubbed Taco Joint, coming to Texas Live!, an entertainment-and-hotel complex in Arlington, Texas, scheduled to open in August.