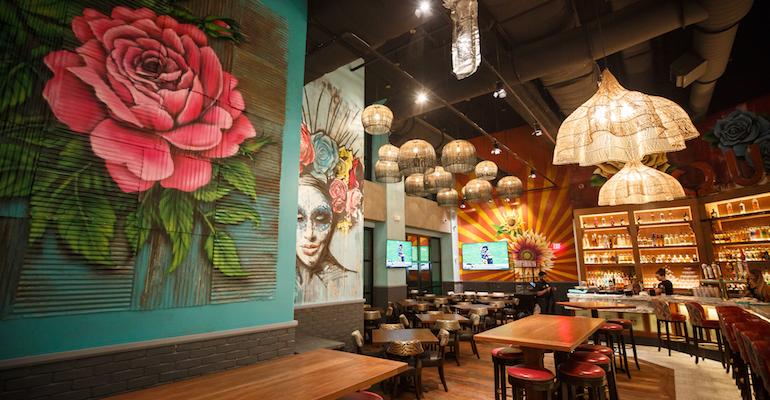 The 6,000-square-foot restaurant is a partnership with Big Night Entertainment Group, or BNEG, which operates the luxury music hall Big Night Live where Tequila Cocina is located, with 185 seats and an expansive bar.

Open for dinner, the menu is largely Mexican-inspired with tacos, seafood like shrimp and ceviche, small-plate bocaditos like “trash can nachos” with Borracho beans, chorizo, cotija, cilantro, jalapeno and crema. Larger-plate especiales include crispy whole snapper with masa breading, and a 32-ounce dry-aged prime tomahawk steak with green onions and roasted habanero butter. Hints of Fieri’s signature Flavortown touches show up in dishes like crispy cheeseburger tacos with Donkey sauce.

But a key feature is the beverage menu, which includes more than 100 tequilas, as well as specialty cocktails and premium margaritas. Guests can also order various flights of tequila with sangrita, lime and salt, including the “Off Da Hook” for $110, featuring Avión 44, Cincoro Anejo and Don Julio 1942, which comes with a free shot glass.

The restaurant was designed by Peter Niemitz and includes wall murals designed to evoke the streets of Mexico.

Tequila Cocina joins Fieri’s portfolio of about 70 restaurants, including the expanding chain Chicken Guy!, which debuted at Disney Springs in Florida last year.

Meanwhile, Fieri’s 20-year-old former concept Tex Wasabi in Santa Rosa, Calif. officially shut its doors in October, according to press reports. Fieri had sold his shares in the concept in 2016 to former business partner Steve Gruber.

CORRECTION: This article has been updated to reflect the full name of the restaurant and that it is currently open for dinner only.