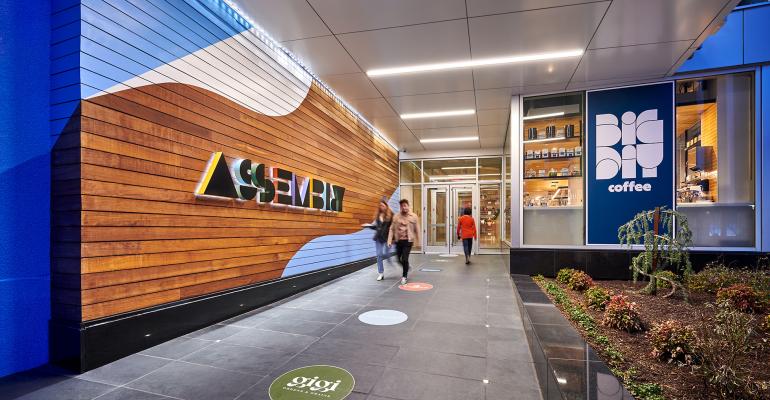 How do you get them back to the office after they’ve seen what remote work is like? That’s the challenge facing many companies in the wake of the COVID pandemic’s forced mass experiment with work-from home and the subsequent seller’s market for talent, which tends to defang my-way-or-the-highway back-to-the-office mandates (though perhaps not for long…).

One strategy with some promise is to make the office a more enjoyable environment that employees want—rather than are forced—to come to, and onsite dining services plays a prominent role in that as stress reducer, collaboration encourager, social hub and all-around dispenser of culinary delights.

That perfectly describes Assembly, a 30,000-square-foot food hall in the Rosslyn City Center in Arlington, Va. that incorporates restaurant concepts from high-end hospitality firm DMK Restaurants. Located above a busy Washington Metro station in a retail/office complex completely renovated by management firm American Real Estate Partners (AREP), Assembly serves the employees and guests of the Rosslyn Center’s tenants, as well as walk-in traffic, with seven distinct restaurant concepts and four bars all uniquely created for the venue by DMK and offering cuisine choices and refreshment options from early morning pick-me-ups to evening ease-me-downs. For a photo tour of Assembly and some of its menu offerings, go here.

With a mix of lounges, dining rooms, worktables, private rooms and a massive outdoor terrace as seating options, there are a host of choices for working alone, collaborating, sharing meals and socializing. Plus, with a single mobile ordering system incorporating all the concepts, groups can mix and match food and drink orders that are then brought to their tables.

“We thought it would fundamentally be better for the guest to kind of reverse the ordering process from what we typically associate with a food hall,” offers DMK owner David Morton. Usually in food halls, people coming in a group tend to go to different outlets based on their food choices, he explains. They then have to wait for their orders and when everyone is finally accommodated, they look for a place to sit.

Not only is this time-consuming for busy individuals, it is also a hassle at a time when they want to relax and enjoy a meal together. At Assembly, orders from the different venues can be combined on a QR Code-based remote order platform and delivered to the group, who are already seated and relaxing. Meanwhile, the streamlined, tech-forward ordering process allows kitchen and food prep operations to be more efficient than is usually possible, especially in the pandemonium of a traditional lunch rush.

Making the restaurant concepts unique to Assembly is also an important factor in its value as an amenity, explains Morton, who created them concepts and their menus in collaboration with James Beard-nominated chef Brian Huston and Assembly Executive Chef Cameron Cousin

“Based on our observations of just about everywhere, with perhaps one or two exceptions, the food hall strategy looks a lot like a lite version of your favorite restaurant,” he offers. “It’s not the main event, but rather is connected back to some other place that has built a reputation or a street cred that has warranted these little food hall outposts, so we felt we had to really crush it from a qualitative, an experiential and a discovery perspective.”

The Assembly restaurant concepts are…

• Great Lake Diner, with traditional diner classics ranging from burgers and fries to grilled cheese and shakes; and

• Fog Point Oysters & Seafood, an upscale full-service seafood restaurant that is the most recent addition to the mix.

Still to open is a grocery/wine cellar outlet called PNTRY that will be part of the next phase in the complex’s development, says John Chesley, managing director of asset management for AREP. “A lot of that will tie in with corporate catering,” he explains. “As companies are coming back, many are asking for it now, and we’ll be ramping it up as we get into later summer and fall.”

The restaurant concepts at Assembly were designed with a specific customer base in mind—that of the sophisticated and trend-savvy associates employed by the professional services, technology and government contractor firms in Rosslyn Center’s tenant base, Morton notes.

“A 25- to 40-year-old diner makes their dining decisions today more through what we call exploration and discovery before deciding what kind of food they want to eat, and Assembly is kind of a celebration of that,” he explains. “To have such an expansive space to explore touches them in many ways, and not just from a culinary standpoint. They are also thoughtfully arranged is such a way that if you want to have an uninterrupted experience to get work done or be on a Zoom call, you can do that; or if you want to sit in a group on more of a social basis, you can do that as well; or if you have a private group with catering, I don’t think anyone in the market is better set up than us. Just through the flexibility and dynamic nature of its design, it’s a very powerful concept.”

Also among Rosslyn Center’s amenities is the large amount of conference, meeting and catered event space available, including one of the largest outdoor terraces in the area, complete with two outdoor bars and performance space.

“What I think is unique about this space from an events strategy perspective is that there really is nothing like it in the neighborhood, or even the larger region,” offers Chesley. “We have a conference room with full A/V capabilities that can broken up for smaller groups and that Assembly can cater.”

The facility is getting inquiries from not only company meeting directors and event planners but also from tour groups, he notes.

For groups with special needs for extra service or accommodation, such as for a significant business meeting or a celebratory event, there is a dedicated, “concierge-like” private associate who works with them.

“We’ve found that when groups come in for these kinds of occasions and there’s more than a just few standard one-size-fits-all options, demand goes up,” Morton says. “People prefer flexibility and dynamic offerings and having a dedicated salesperson that works with them has proven to be very successful for us.”

“It’s part of the vision of what we wanted to create there,” he explains. “When we started development at this site some years back, we wanted to create a unique offering centered around some kind of food experience, and we saw the food hall as really that draw, so we worked with David and his team to do that.”

Of course, the divide between in-office and remote work is still continuing to shake itself out, but Rosslyn Center tenants are beginning to see more employees coming back to the office, says Chesley, whose firm tracks facility traffic through metrics like key card access usage.

“With early spring as Omicron kind of faded out here, companies started coming back,” he reports. “We’ve polled our tenants and probably the majority of them here will probably be fully back in the office program by the end of the summer, though still with some flexibility.”

“What we’re seeing not just at Assembly but in the other cities we’re in like New York and Chicago is that, statistically, there’s a real, measurable, accelerated return to work activity,” Morton adds. “My opinion is that those that are that are enjoying the most success are doing it as a function of their foresight to have this type of amenitization going on.”

Also part of what makes Assembly so dynamic is its accessibility to the surrounding community, he suggests.

“Philosophically, we think having it open to the public reinforces the value of the space to tenants and everybody else; and having a diversity of traffic and users makes it feel like the welcome mat to the property and kind of a neighborhood hub,” he says.

Designed for the modern workplace

The Assembly concept was a collaboration among AREP, DMK and designer Karen Herold of Studio K Creative, whose resume includes such iconic spaces as the Girl & the Goat restaurant in Chicago.

“We sat down and thought about how we wanted people to feel from a space perspective when they are in the place,” Morton recalls. “We’ve gotten incredible feedback on it, about how it’s a calming environment where people are as eager to go to start their day with coffee and house-made pastries, etc. as they are to close the place down with cocktails. It almost has that Soho house utilization side to it that is incredibly rare in a food hall space.”

AREP’s ownership of the Rosslyn Center and its initial planning dates back to 2015, so the conception of the Assembly’s role in a post-pandemic world had to be evolved from those initial ideas in the last couple of years, Chesley explains.

“The lessons of post-pandemic speak toward what ‘realistic’ now needs to be and what employers are looking for to bring employees back,” he says. He adds that in addition to the business offices onsite, Assembly gets traffic from the Metro station directly underneath, from the 30,000-square-foot Gold’s Gym also located on the premises and from the onsite events space, “so we see a lot of folks coming in and out of there, and that speaks to having something unique instead of just an office building with a deli and coffee shop on the property. This is something great that we hope to replicate at some of our other properties.”