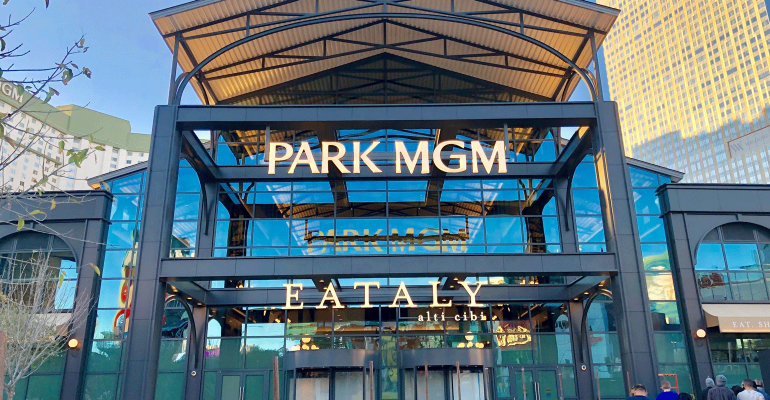 The restaurant-retail brand opens its sixth U.S. location this month

Each time Eataly opens a new location in the United States, curious fans often ask the Italian owners the same thing over and over.

Is Eataly a restaurant or a retail market?

Typically, the answer is both. The five U.S.-based locations — two in New York and one each in Boston, Chicago and Los Angeles — are a mix of grab-and-go Italian groceries, restaurants, cafes and bars. Retail and foodservice counters or sections are separated in each venue. Eataly also has 31 locations outside the U.S. 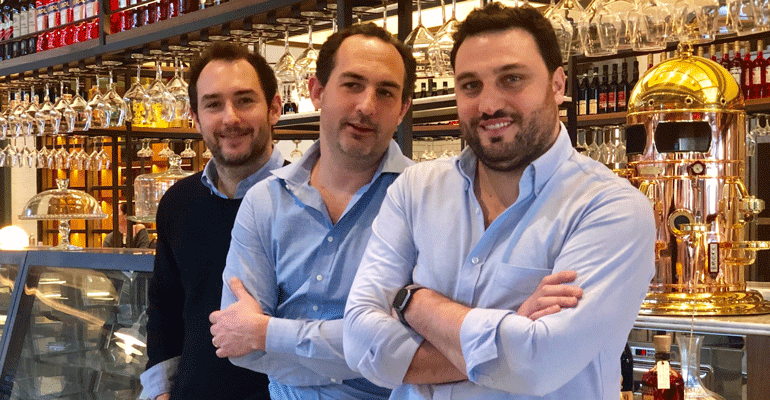 For the sixth U.S. outlet, opening Dec. 27 at the Park MGM in Las Vegas, the team behind Eataly tweaked the Italian food hall concept to cater to the thousands of tourists who visit the gambling mecca. At the center of the 40,000-square foot marketplace is a “counter-to-table” space with hybrid food stands serving food to eat onsite or cook at home.

“We decided why don’t we put the retail into the restaurants,” Eataly USA CEO Nicola Farinetti said of the hybrid walk-up food counters. 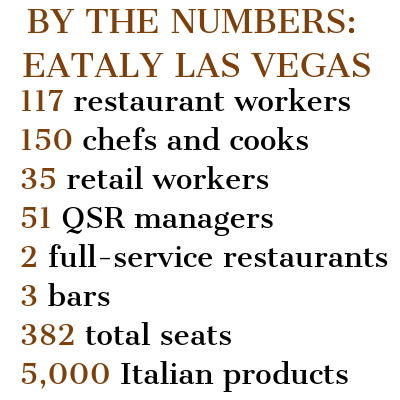 And, that’s the beauty of the Eataly model. Each one adapts to its location as the U.S. division continues to grow, company leaders told Nation’s Restaurant News during a media tour of the site last week. Some are multiple stories, while others like Las Vegas take up one floor.

“Eataly is in constant evolution,” CFO Adam Saper. “We don't think of Eataly as a chain. We think of them as siblings.”

Shop what you eat, eat what you shop

In Las Vegas, fans of Eataly will notice a series of “firsts” for the location, whose main entrance faces the Las Vegas Strip.

As visitors walk in from the street, they enter the Cucina del Mercato, or “kitchen of the market.”

This is a combined retail and restaurant space. Six countertops sell everything from freshly butchered sustainable meats to hand pulled mozzarella to charcuterie plates. 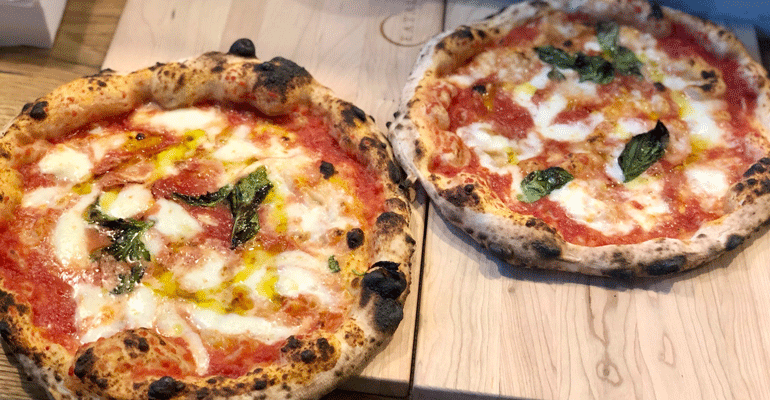 At the La Macelleria counter, for example, a shopper can buy Black Angus beef sirloin to cook at home or have a chef behind the counter cook it to be consumed on site. The other counters operate the same way, including the Italian Street Food (paninis, roasted meats, mozzarella bar), La Salumeria (charcuterie and cheesemonger), La Pizzeria (pizza alla Pala) La Pasta Fresca (handmade pasta) and La Pescheria (seafood to-go, ceviche, oysters and grilled or oven roasted fish).

COO Alex Saper, and his brother, Adam, said the setup is designed for the high-volume city. On any given day, the city can be flooded with a mix of tourists attending conventions, shows or concerts — not to mention the daily throng of international tourists.

“We are able to create this exciting experience where everything is combined as much as possible. So you can choose to purchase it, take away and or have it cooked right there,” Alex Saper said. 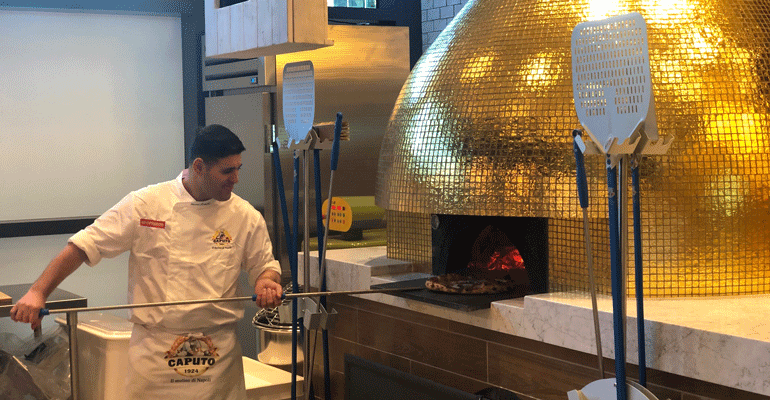 The brothers, along with Farinetti, led the media tour held last week at the Park MGM, which has been in the spotlight this year as it underwent an evolution of its own.

A unique partnership with MGM

Eataly Las Vegas is part of a $550 million makeover of the Monte Carlo hotel and casino by MGM Resorts International and New York-based Sydell Group. The 2,700-room Las Vegas hotel rebranded as the Park MGM in May. 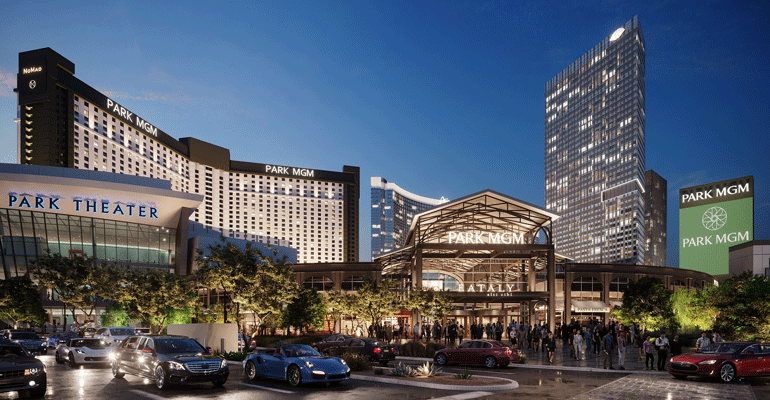 Over the course of the year, the modern luxury hotel has unveiled several new restaurants, including Chicago-based Bavette’s Steakhouse & Bar and the NoMad Restaurant by Chef Daniel Humm and restaurateur Will Guidara. An in-house concept by MGM called La La Noodle is opening this month, along with Best Friend, a Korean concept by Los Angeles chef Roy Choi.

Farinetti, whose father founded Eataly in 2007, oversees the company’s U.S. operations. The first one opened in New York in 2010 under much fanfare as Mario Batali was well-known investor. After the celebrity chef was accused of multiple acts of sexual misconduct at his restaurants last year, Eataly distanced itself from the chef. 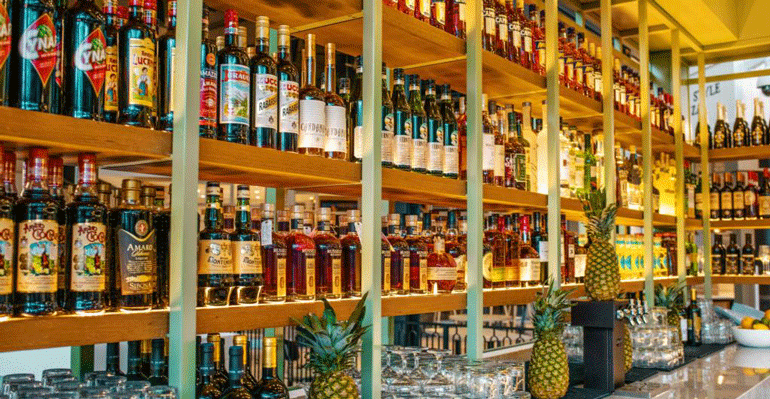 All Batali-branded products were removed from each location last year as accusations emerged. When asked if Batali has divested his stake in the company, Farinetti said: “We’re in the process.”

What’s next for Eataly?

After Las Vegas, Eataly’s next location opens in the third quarter of 2019 in Toronto. After that, new locations have not been announced.

Wherever they land, Saper said don’t expect a copycat of Las Vegas. Some of the new features might translate. Some might not. 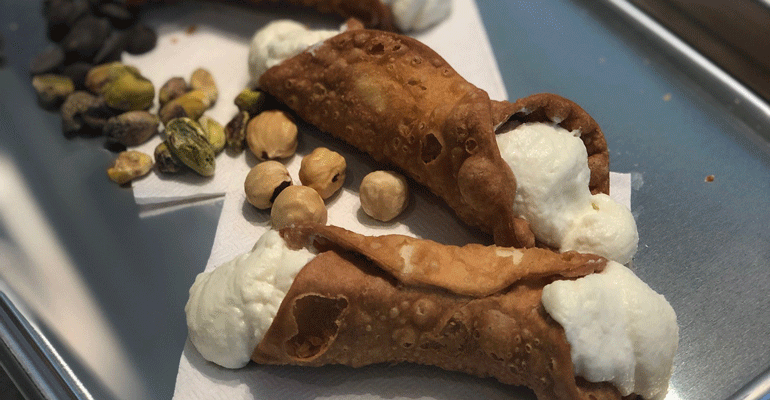 “What works well in one location, might not work another,” he said.

What is the same in all venues is the variety of food options for guests on different budgets.

“What’s great about Eataly is that you can go to Eataly and have a $2 slice of pizza or you can spend $150 on a meal,” Alex Saper said.

Las Vegas, ironically, was never on the company’s radar until MGM approached the leadership team with a deal they couldn’t refuse. 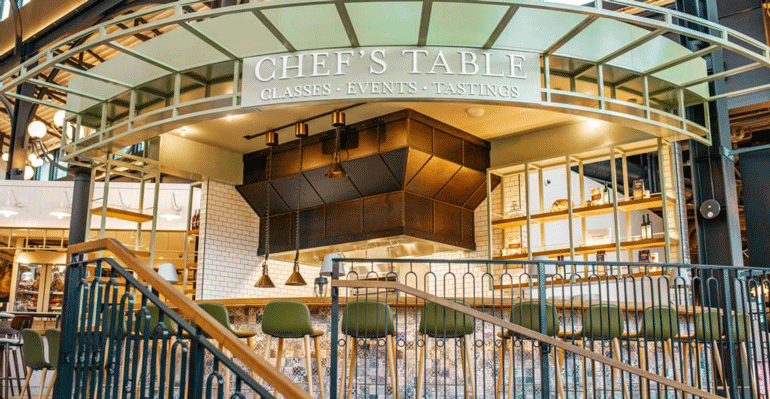 Eataly Las Vegas is the centerpiece of a string of new restaurants opening at the reimagined hotel. It enjoys a grand entrance from the Strip, next to another MGM property, New York-New York Hotel & Casino. The latter is the site of the city’s first Shake Shack.

MGM built the single-story space, while Eataly manages the operations — a first for the company, which typically builds its own venues, Farinetti said.

Eataly is next to the hotel’s 5,200-seat Park Theater, where headliners include Bruno Mars and Lady Gaga. Lady Gaga launches her Las Vegas residency at Park MGM on Dec. 28, the day after Eataly opens. 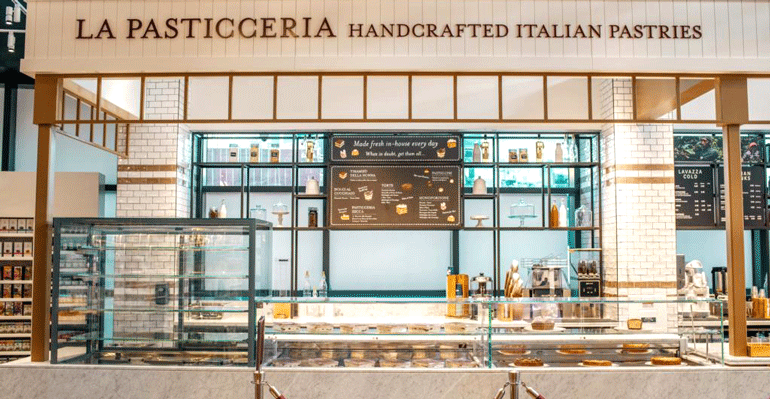 Farinetti is projecting revenue at Eataly Las Vegas to be dominated by foodservice versus retail, another reason for adding the hybrid counter-to-table stations.

In Italy, roughly 60-70 percent of the revenue from most Eataly locations are generated from retail.

In Vegas, Farinetti said he expects 30 percent of sales to come from retail. The rest will come from those dining at the marketplace’s two full-service restaurants, three bars — including one open 24 hours a day — a 12-seat chef’s table, the counter-to-table food stands and seven sweet and savory take-away counters. 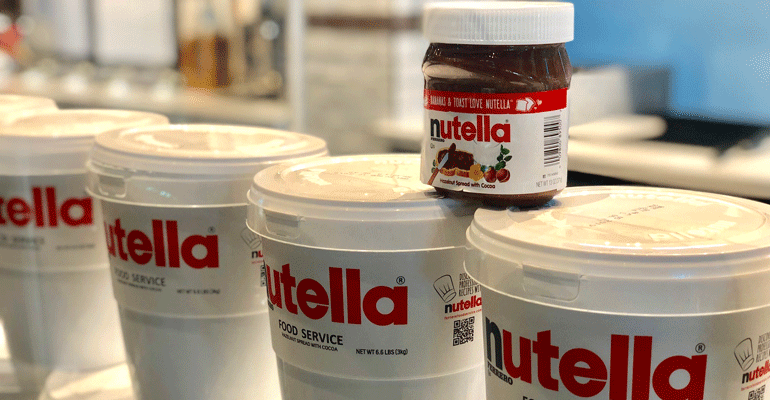 The Chef’s Table, a new Nutella bar and food carts outside are other new concepts debuting in Las Vegas, as well as classic Italian bar open 24 hours. The Gran Caffe Milano, which faces casino entrance of Eataly, will offer cocktails morning, noon and night, as well as an all-day menu for round-the-clock Vegas crowds.

The Eataly team hopes all the experimentation and tweaks made for Las Vegas will pay off.

“We hope it will be our highest-volume [store]” store, Farinetti said.