Kluger fell in love with New York’s greenmarket as maître d’ at Union Square Café in 1995. His focus on local ingredients stayed with him as he moved into the kitchen, later working as chef de cuisine at Union Square Hospitality Group’s Tabla and moving on to work for Tom Colicchio and Jean-Georges Vongerichten before becoming executive chef at ABC Kitchen in 2010, and later opening ABC Cocina.

Kluger’s love for local ingredients continues at Loring Place. Here, kabocha, a Japanese winter squash, comes to the table wood-oven roasted with sourdough slices grilled to crunch in concert with a creamy ricotta.

Dishes are also designed for sharing. At Loring Place, a stand of raw vegetables is plated as if a forest unto itself. Carrot-ginger puree is the dip. Also pictured, the same fall vegetables by way of a chili-smoked aioli in the Grains Salad, while sunchokes and shocks of tarragon transform a tuna tartare.

The bar at Loring Place is where fellow ABC alum Ann Marie Del Bello and Sommelier Natalie Johnson keep it simple. One classic, the Bee’s Knees, combines gin, honey, and lemon. Another signature drink is the Thoroughfare with kaffir lime and rum.

Dessert at Loring Place adds an adult twist to childhood favorites, from the five-spice toffee and cranberries in the Monkey Bread (pictured), to a gussied-up “hostess cupcake” featuring orange créme fraîche and tangerine sherbet. The Box of Cookies on the menu might include a whole-wheat blondie, or linzers and crinkles to macaroons and black and whites.

Loring Place is named for the street chef’s father grew up on in the Bronx. Dan Kluger’s father Arthur Kluger passed away earlier in 2016 before seeing his son’s restaurant fully realized. 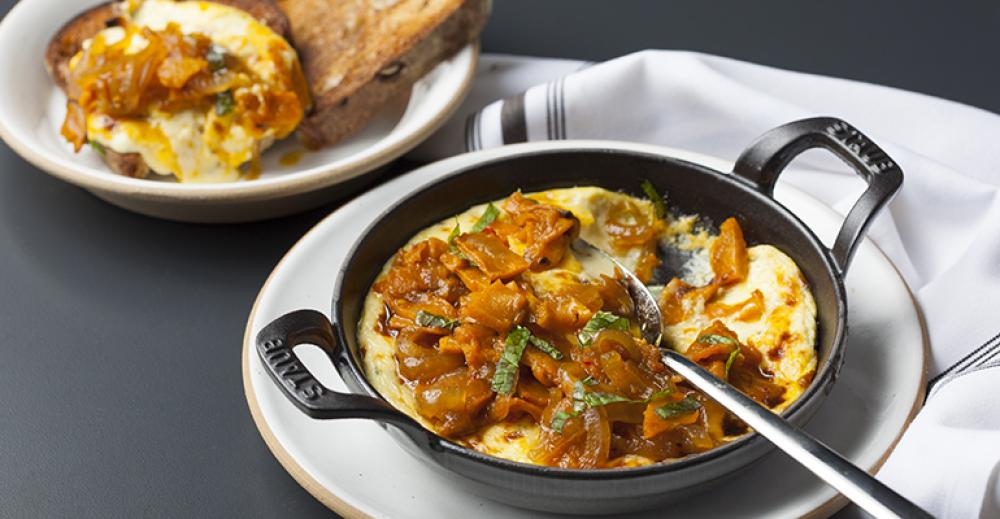