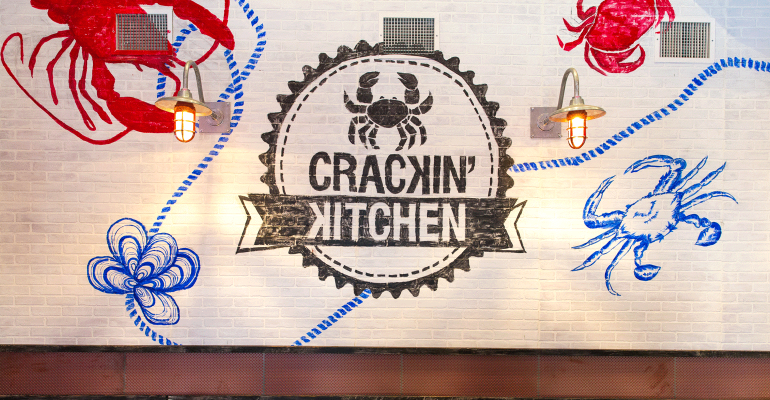 Crackin’ Kitchen to debut in California

Seafood concept by Japanese conglomerate already has a presence in Hawaii

The Japanese conglomerate Toridoll Holdings Corp. is growing a new restaurant concept in the U.S.

Crackin’ Kitchen is scheduled to open in Pasadena, Calif., on Friday, featuring a Hawaiian spin on Cajun-style seafood cooked in a bag with various sauces.

The original Crackin’ Kitchen first opened in Waikiki, Hawaii, in 2015 and is part of a growing portfolio of brands that Toridoll plans to expand in the U.S. Toridoll, based in Japan, operates about 1,396 restaurants worldwide, including 994 units in Japan, across 20 concepts.

Crackin’ Kitchen is designed to stand out from other seafood-in-bag concepts now common in Los Angeles.

The menu was developed by Takeshi Omae, who earned a Michelin-star at the Tokyo restaurant Morimoto XEX and who was a sous chef on “Iron Chef America.” He also had a restaurant in Las Vegas called Japanese Cuisine by Omae. Customers order seafood by the pound, including snow crab, shrimp, clams and mussels, with a choice of sauces. The bags are brought to the table, opened and spread out on wax tablecloths for diners to dig in with crackers, gloves and bibs, Teramoto said.

“There’s a real ‘wow’ factor,” he said. “We provide a sheller and a cracker and they get their hands dirty.”

Unlike the original location, the new Pasadena restaurant will feature Mussel Pots, allowing customers to choose from about 15 sauces, such as the classic, with white wine, garlic and shallots; Thai green curry; creamy portabella mushroom; and one that includes Kentucky bourbon and prunes. “It has this really nice aroma and a sweetness to it,” Teramoto said of the latter.

Also on the menu are chowder fries and Hawaiian-style lomi lomi, a raw salmon salad with diced tomatoes, green onions and chili water.

Adding to the Instagram potential is a tableside “Sweet Art” dessert that involves fruit purées, chocolate and freshly cut fruit that allows the guest to paint edible art across the (cleaned) table. Toridoll Dining also operates Marugame Udon, the company’s largest brand, which is known for its noodle-making robots. There are two Marugame Udon locations in Hawaii. In 2017 it debuted in Los Angeles and earlier this year it opened in San Francisco, Teramoto said.

Another fast-casual stir-fry concept called Wok to Walk is scheduled to open in Hawaii in early summer, Teramoto said. In 2015, Toridoll acquired a majority stake in the Amsterdam-based chain, which has multiple units in New York.

Toridoll is looking for more U.S. locations for both Crackin’ Kitchen and Marugame, he said. Americans are more open to Japanese concepts that serve as alternatives to sushi.