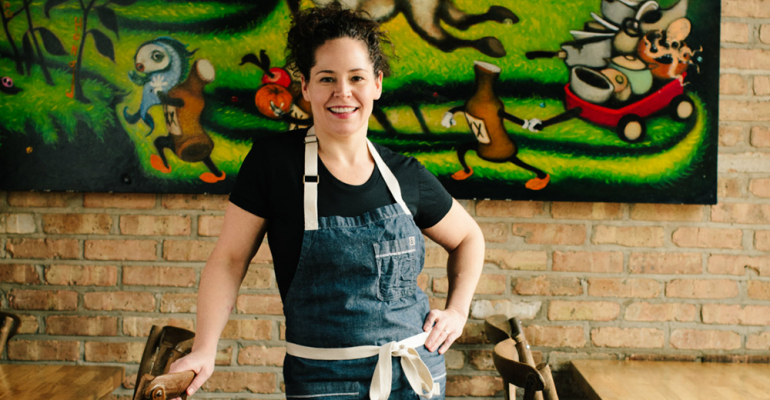 Tiny Goat will operate above the Little Goat Diner

James Beard Award-winning chef Stephanie Izard said Monday that she will be opening a twice-monthly pop-up restaurant in the private dining room above her comfort food spot, the Little Goat Diner in Chicago.

Appropriately named Tiny Goat, the “tiny restaurant” will hold its first dinner events Dec. 30 and Dec. 31 for a New Year’s tasting menu at $125 per person, featuring some of chef Izard’s favorite dishes from all three of her restaurants: the Michelin-starred Girl & the Goat, Little Goat and Duck Duck Goat.

“I’ve been trying to go out to dinner more often for inspiration,” Izard told the Chicago Tribune, “and I went to Eleven Madison Park [in New York] — not that I’ll be able to do what they’re doing, but it made me want to do a tasting menu.”

A spokesperson for Izard said the twice-monthly dinners will be “an elevated tasting experience” that will still be “fun and unfussy,” featuring a unique tasting menu with beverage pairings for every event. The new concept’s culinary experience will differ from the family-style, small plates approach at her other restaurants. In an Instagram post, Izard said the dinners are an opportunity to “allow my creative juices to have an outlet and our team to have an extra challenge.”

Tiny Goat dinners will be orchestrated by Izard and other members of her culinary teams from all three restaurants.

Izard posted a link on her social media pages for prospective guests to reserve tickets for the first dinners on Tock, a restaurant reservation ticketing system. Within 24 hours of the post, tickets were sold out for all New Year’s Eve seatings and only one Dec. 30 time slot remained.

Future Tiny Goat dinners will be announced on social media and through Tock — where tickets will be sold — approximately a month in advance, the spokesperson said.