Blackhouse Hospitality recently opened its sixth restaurant, Little Sister Downtown, a reimagined interpretation of its Manhattan Beach counterpart. Located in downtown Los Angeles, the new restaurant has an expanded menu that features the cultural and culinary influences of imperial rule in Vietnam during the 19th century. Here's a look inside.

Tin Vuong and Jed Sanford of Blackhouse Hospitality, which was featured in RH’s 2015 list of the Coolest Multi-concept Companies in the Land.

Here’s a straight-on look at the ultracool images on Little Sister’s walls.

Let there be light

A glass wall along the sidewalk allows natural light to brighten up the place, which is open for breakfast, lunch and dinner.

A favorite breakfast offering is congee, a rice porridge that can be dressed up with a variety of proteins. In all cases, it is served with Chinese savory doughnuts.

Another light breakfast and lunch choice is pho ga, a broth with rice noodles and classic condiments.

For a heartier appetite at lunch, a Vietnamese beef stew called Bo Kho is served with a baguette and French butter with marrow, tendons, oxtail and rib meat.

An “introduction” on the dinner menu includes these pork, shrimp and crab dumplings with spicy black vin dressing, spinach and peanuts.

Stick to your ribs

Another favorite from the meat and poultry section is this bowl featuring fried pork spare ribs, tamarind and eggplant.

Who could resist this lemongrass lamb satay? 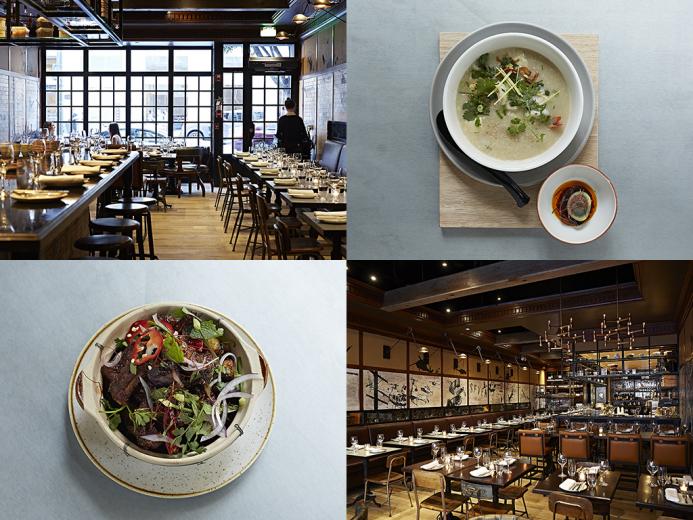