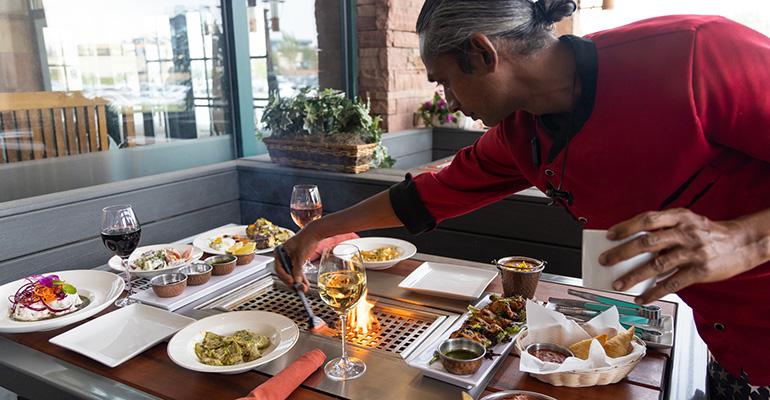 Guests can cook their own meat on grills built into the outside tables. A feature starting at $12 for each marinated protein and $10 for each vegetable.
Trends>New Restaurant Concepts

Cooking at a shopping mall in the Denver suburb of Lone Tree, the chef is trying to standardize his home country’s cuisine

Chef Charles Mani never cooked food from his home country of India until he moved to New York City. Now, he's working to revolutionize the way Indian food is made and served at his Denver-area restaurant, Urban Village Grill.

"If you go to 10 different Indian restaurants the food is going to taste 10 different ways, but the names are all the same and people are paying the same," said Mani,  a classically trained chef who studied at SRM Institute of Hotel Management in Chennai, the city he's from. "I want to bring a standardization so people can eat the same thing in New York City as they do in Denver."

The goal, said Mani, is to grow the brand and create an Indian food template for the American palate. It's not what his grandma cooked, he said. His food has influences from all over India, and other parts of the world, too. 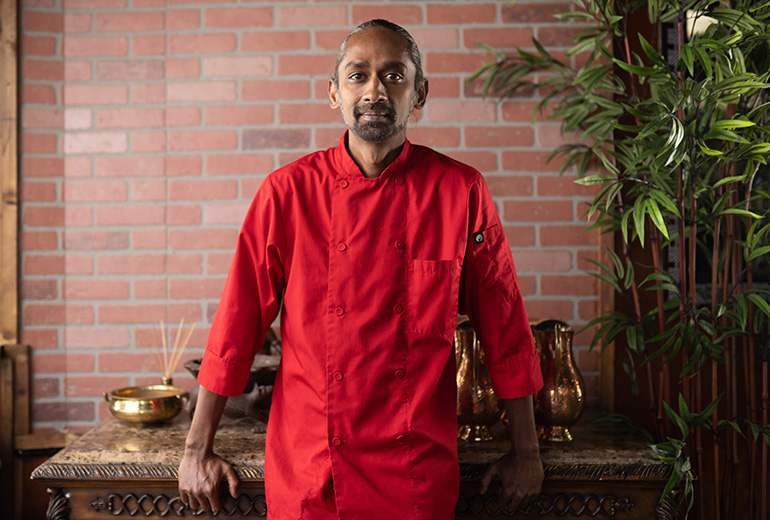 "I wanted to go into making Indian food and translate what I have learned into that food," said Mani. "I didn't want to do the stereotypes of Indian cuisine. I wanted to bring more excitement to the Indian food, and that's how I decided to combine different styles."

One way Mani sees creating a more standardized Indian food menu is by getting rid of the mild, medium, or hot choices often offered at Indian restaurants. Indian spices can take almost an hour of cooking to extract the flavors as well as the heat. If you just slap them into the dish depending on how spicy the eaters want the food to be, they miss out on the complexity of the ingredients.

But for customers who do want their food to be particularly incendiary, Mani developed his own hot sauce for them to use. 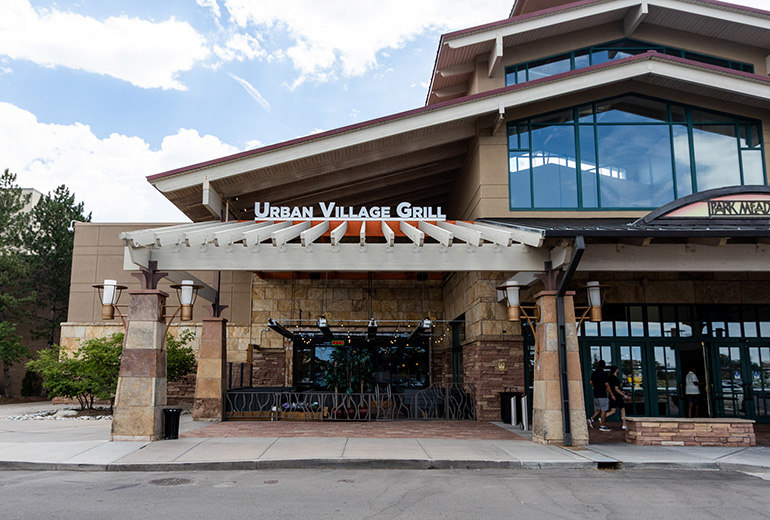 He has also added programs not often found in Indian restaurants. For example, guests can cook their own meat on grills built into the outside tables. A feature starting at $12 for each marinated protein and $10 for each vegetable.

"During COVID time everyone was grilling, and I didn't want to destroy the happiness they had created [around the event]," he said. "Plus, not a lot of people get the chance to cook their own Indian food."

Also, Mani wanted to bring Indian flavors to the grill, building off of Japanese and Korean barbecue joints. He researched to see if any other Indian restaurants offered do-it-yourself grilling, but he found no one had started it.

"I always want to create something that isn't done in the [traditional] Indian restaurants," he added. 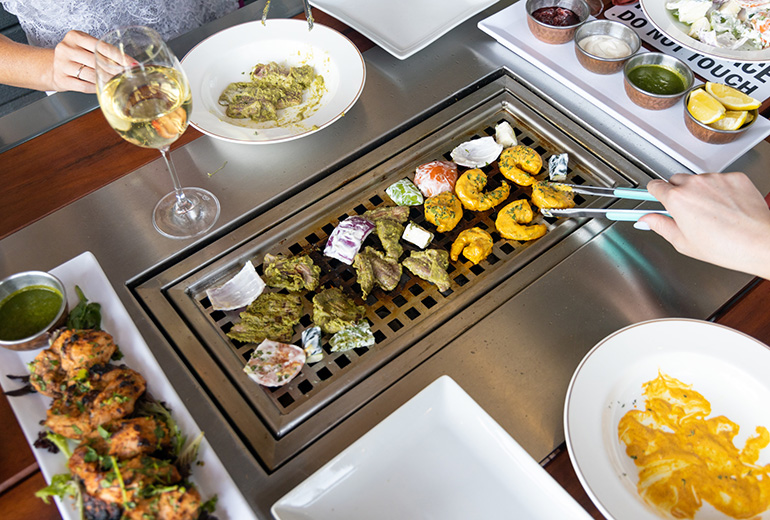 The restaurant also offers a coconut curry with a thick and succulent gravy that stands on its own. Then there's the "Not Your Grandma's" section of the menu, featuring a craveable butter chicken, shrimp or paneer in fenugreek sauce. Dinner runs between $18 and $25 for entrées, and starters such as classic mulligatawny soup (a thin meat and lentil soup) and vegetable samosas run from $6 to $14.

Mani left India in 2005 and moved to New York City. There he worked as a chef at Indian restaurants Babu Ji and Badshah, though his first job as an executive chef was at a Mexican restaurant. He came to Denver in 2018 on a whim after falling in love with the state during a visit. Urban Village Grill opened in 2021, after the owners met Mani at another, now shuttered, restaurant where he spoke up about the inconstancy of his meal.

"I went in with one of my American friends. She ordered the spiciest, they gave her mild, and I ordered mild, and they gave me spicy," he said. "They told me they didn't think she ate it that spicy, and most of the Indian restaurants make assumptions like this as to what they think the person eats."

He convinced them that Indian food didn't have to follow a stereotype, either on the customer or restaurant end. Indian food also doesn't have to be heavy or full of oil, he said.

Mani also has taken different approaches to making Indian classics. He said that for many of the cuisine’s traditional dishes, the ingredients are added to oil over a direct heat source, or inside a pressure cooker. He said that buries the flavors of the meat and vegetables. 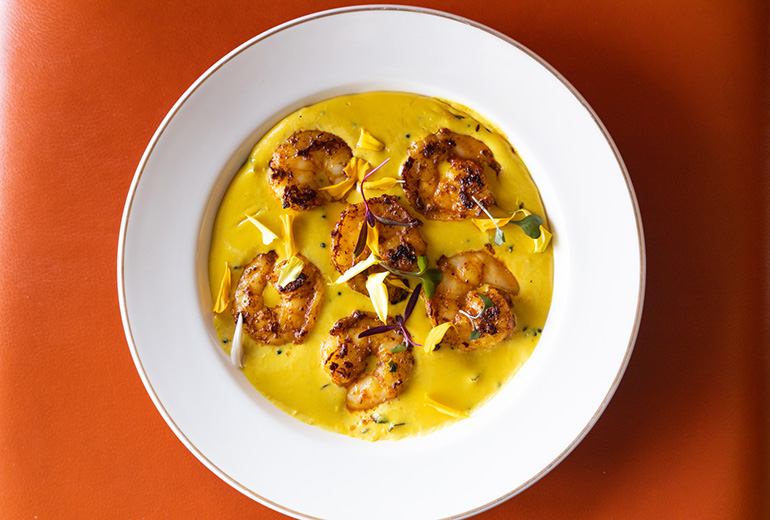 The restaurant also offers a coconut curry with a thick and succulent gravy that stands on its own.

Instead, Mani has incorporated the French double-boiling method to cook his food more gently. It’s a process that takes longer, but the result is richer flavor, he said.

It's not just Indian food that Mani looks at differently, he also wants to support culinary students by hiring them first and foremost. For his own education, Mani said his mother pawned her wedding ring to help pay for it, and he still had trouble finding work.

"I wanted to closely work with students to help them fulfill their dreams, faster than I did," said the chef.  "I want to give opportunities and I believe in the next generation, and that people have better ideas than me and can bring their skills and ideas."

While only one Urban Village Grill exists right now, in Lone Tree, Colo., Mani said he plans to take the concept beyond Colorado. In a way, having his restaurant in the Park Meadows Mall, the largest shopping mall in the area, showcases the type of clientele he wants to attract: Average Americans looking for good, healthy Indian food. No surprises, just a tasty meal that they’ll remember, and then someday giving them an opportunity to have the same experience at another location.