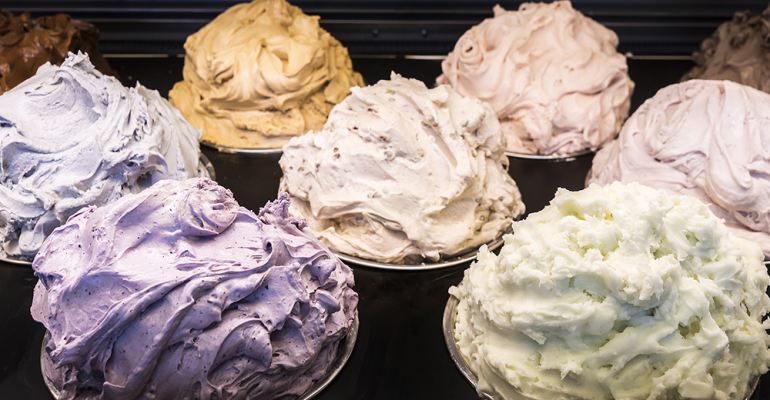 A booza shop grows in Brooklyn

Founders hope the ancient style of ice cream will catch on

Jumping into the already crowded frozen-dessert space is a new concept that taps into the ancient history of ice cream.

The Republic of Booza opened Monday in Brooklyn’s Williamsburg neighborhood, a 700-square-foot ice cream parlor claiming to be the nation’s first scoop shop to feature booza, a frozen dairy-based dessert widely known in the Eastern Mediterranean region called the Levant.

Travelers to Syria, Lebanon, Israel, Turkey or Greece, for example, will likely be familiar with booza, which is known as a denser, creamier, more-elastic ice cream made with the ancient ingredient sahlab, or ground orchid root, and mastic, a resin.

Added to milk and mixed in a freezer drum, booza is pounded with a three-foot wooden pestle and stretched by hand, offering guests a bit of theater with their scoop. The result is almost taffy like, but dense and creamy, said Michael Sadler, Republic of Booza co-founder. Republic of Booza serves its namesake, which a frozen dairy-based dessert popular in the Levant.

The traditional booza found in the Levant is typically one flavor — qashta, or candied cream — in which the earthy “piney” mastic flavor can be best recognized, Sadler said.

That’s on the menu at Republic of Booza, but so are more familiar American flavors, like vanilla, chocolate, pistachio, strawberry and salted caramel, in which the mastic is less noticable.

“Opening day has really hammered home to me how deeply personal taste is because there has not been a single flavor that hasn’t been a person’s favorite,” he said, except maybe the bloody Mary sorbet, which has proved somewhat divisive. “Some people loved it, but others said that’s the one they wouldn’t have again.”

“Most people think of ice cream as a sweet thing, but it’s a wonderful way to express flavors across the spectrum,” he said.

Prices range from $5.25 for a small size, to about $8.25 for an extra large, and guests can choose a cup or waffle cone.

Sadler said he came to know the treat living in the region as a student studying philosophy and Arabic. There, he met business partners Tamer Rabbani, Jilbert El-Zmetr and Mohammed Makki.

The idea grew out of a traditional booza concept first attempted in Australia, but the focus on qashta proved too limiting, Sadler said. Salted Oreo (left) and blackberry are among the flavors available at Republic of Booza.

The dessert is available in some places in the U.S., but there were none dedicated to the treat in the same styles as an American ice cream shop, he said.