Having opened on June 3 in New York City, Peachy Keen combines comfort food with kitsch in a bid to kindle 1970s nostalgia. Entrées like the pastrami reuben with Gruyère cheese, sauerkraut, fresh horseradish and tangy aioli on marbled rye balance out a menu full of sweet treats including root beer and Creamsicle floats, funnel cakes, nostalgic cereals and candies, cocktails and boozy milkshakes. The 142-seat restaurant is designed to resemble a retro ice cream parlor — complete with neon signage and vinyl countertops — and divides into a main dining room, a parlor space and two bars.

Chicken and Waffles at Peachy Keen

On the menu at Peachy Keen’s upcoming disco brunch, the chicken and waffles are served with a spicy honey-maple dip and green-onion butter.

Velvet-upholstered seats, vinyl countertops and vibrant colors conjure an image of the past that’s rose-tinted but emotionally true. The space was designed by Wid Chapman Architects, who also designed New York City’s Dhamaka.

Twin-brother restaurateurs Sunchol Lee and Sunbong Lee, known for their chain of Japanese steakhouses Yakiniku Futago, debuted Nikutei Futago, a kaiseki concept, in New York City last month. The 38-seat restaurant offers a $320 seasonal tasting menu, which centers on Japanese A5 Wagyu beef, along with an optional $125 sake pairing menu. An emphasis is placed on the play of scents wafting throughout the restaurant. To that end, a grill is set into each table, allowing the beef to be cooked on the spot, which maximizes its flavor according to the restaurant.

In keeping with the restaurant’s theme, even the sushi course at Nikutei Futago includes Wagyu beef.

Tables are partitioned from one another by curtains, as shown in the photo, or by shoji (sliding doors). Along with the garden customers traverse upon entering, the semi-open dining rooms play into the restaurant’s goal of a refined yet spontaneous ambience.

James Beard award-winning chef François Payard will debut his latest concept, a bistro emphasizing local ingredients, later this month. Best known as the pastry chef at New York’s two-Michelin-starred Restaurant Daniel and later as the owner of François Payard Patisserie and Bistro — now closed — Payard shifts focus from pastries to bistro cuisine at Southold Social, which he co-owns with restaurateur Adam Lovett. The restaurant, wedged between the Long Island Sound and the Peconic River, will offer seafood dishes like Montauk black sea bass and lobster rolls, as well as housemade pasta, meat dishes and local and European wines.

Payard serves the classic New England dish with piment d’espelette (a type of French chile powder from the Basque region).

Setting up shop in a bi-level house, Southold Social will have four dining spaces: a dining room, a bar, a 38-seat private dining room and an outdoor patio that is expected to include a fire pit by mid-summer.

The Italian restaurant chain Serafina opened its second Boston location on June 4 in the Seaport neighborhood. The new location is larger and offers a more diverse menu than the one in Back Bay, which specializes in pizza and pasta dishes. Serafina Seaport’s menu includes seafood dishes like branzino al cherry tomatoes with white wine cherry tomato sauce, asparagus and basil oil, and cioppino with local white fish, mussels, shrimp, calamari and spicy tomato-saffron broth, alongside tried-and-true pizza and pasta dishes and a selection of Italian wines. As a bonus, patrons can watch the staff prepare their pizza in the restaurant’s separate pizza kitchen and bar.

Serafina’s two live olive trees and Italian artwork complement leather banquettes designed to evoke the 1950s Italian Riviera. The 114-seat space includes a main dining room, a bar, a pizza station, an outdoor patio and two private dining rooms in which guests can play their own music through an AUX cord.

Cured in koji, smoked and topped with white kelp, the carrot nigiri is one of Omakaseed’s various plant-based sushi dishes.

Feel the Beet cocktail at Omakaseed

George Aboujaoude, the Boston restaurateur behind Cafeteria, which closed in 2020, has reopened the space as Eva, a new American concept. The menu features a mix of dishes from Cafeteria and new entries like a lamb chop topped with mint chimichurri on garlic labneh. The interior has been redecorated with a botanical theme, and the large patio invites brunch and dinner patrons to linger over drinks and share plates. A serendipitous discovery inspired the restaurant’s name: E, V and A are the first initials of Aboujaoude’s children, and Eva is the name of chef Luis Figueroa’s mother.

Chicken and steak tacos at Eva

Served with spicy avocado and pico de gallo, the tacos at Eva count among its many shareable dishes.

The large patio known to former patrons and passersby of Cafeteria is open again, offering Bostonians the perfect setting for a leisurely summer afternoon. 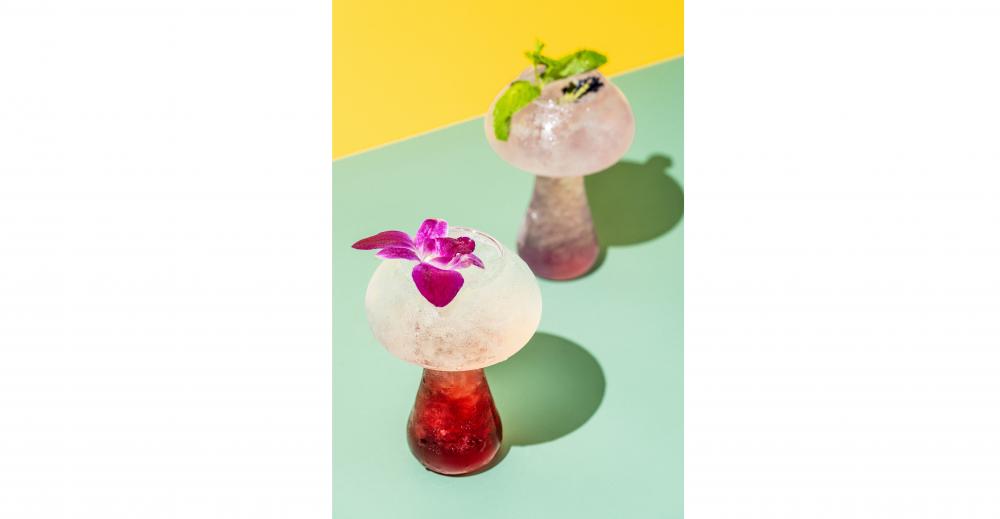