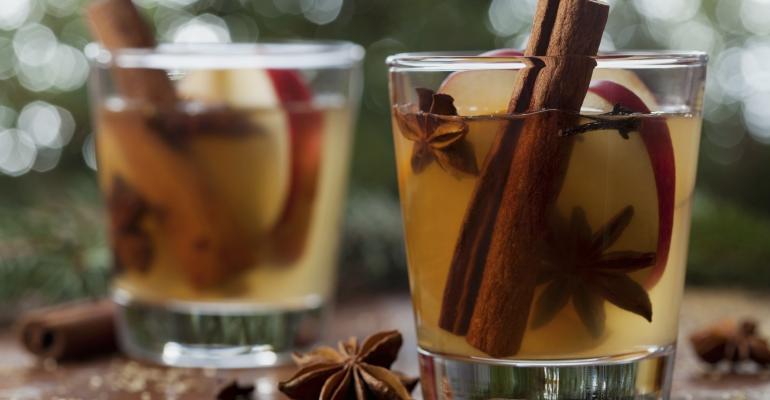 There are no hard and fast rules for fall and winter cocktails. The run dates, spirits, flavors and presentations are at the operator’s whim. If there is a common denominator, it is creating excitement to drive bar traffic when summer fades, vacation ends and guests resume their everyday lifestyles.

However, flavors that recall the holidays, such as apples, citrus fruits and spices like cinnamon, allspice and cardamom, traditionally shine in fall and winter libations. In terms of spirits, it’s time for robust whiskeys, brandies and aged rums to get top billing over the lighter vodkas, gins and silver rums of summer.

Consumers are increasingly drawn to locally grown, seasonal food for environmental, thrift, freshness and health reasons, according to Euromonitor International’s Top 10 Global Consumer Trends for 2016 report. Seasonality in cocktails has a similar appeal.

In New Orleans, where Dickie Brennan & Company operates the Palace Café, Dickie Brennan’s Steakhouse, Bourbon House Seafood & Oyster Bar and Tableau restaurants, the arrival of fresh Louisiana oranges and other citrus fruits in fall and winter is a signal event for mixologists and bar patrons alike.

“You just get the idea in your mind that it’s fall,” says Barry Himel, beverage director for Dickie Brennan & Company. “The citrus makes a big impact on our menus. Drinking a well-crafted cocktail produced with local ingredients is special and it creates great conversation.”

For example, at the Palace Café’s Black Duck Bar, which features 135 rum selections, local orange juice is an asset in the Rum Punch, Hurricane and a number of modern tiki cocktails, Himel observes. The signature Palace Planters Punch leverages locally made amber rum plus cardamom syrup, orange, lemon, orgeat and vanilla brandy. “We’ve been selling that drink for the past six years and it continues to be a hot seller for us,” Himel says.

Although some restaurant operators play the seasonal angle by painstakingly making bar ingredients in house, others choose high-quality prepared syrups, purees and bitters to save labor and ensure consistency. For the Dickie Brennan restaurants, the volume of bar business at a particular restaurant and the quality of the options available inform such decisions.

“The beauty of where we are today in the cocktail world is that there are some wonderful products available now, whereas five years ago we would have had to make them from scratch,” says Himel. “If there is something that is commercially produced that excites us and makes a superior product, we will use it. If we have something in the backyard that excites us, we will use that.”

At Macon Bistro & Larder in Washington, D.C., the arrival of fall brings “a huge uptick” of orders for bourbons, scotches and brandies and a drop in martinis and white spirits, says Andra “AJ” Johnson, general manager and beverage director of the French- and Southern-inspired restaurant.

For Johnson it’s a great time to promote premium spirits. For example, last year she touted bourbon and cognac flights and featured a stellar $45 Manhattan made with 15-year-old rye whiskey. “If you show people you have great stuff at the bar, they will be floored and will come back with their friends,” says Johnson.

This fall, Johnson foresees leveraging American apple brandy and French Calvados in a specialty cocktail with sweet vermouth and lemon. She will also explore the nutty, toffee-like notes of aged sherry in cocktails. “And I definitely want to play around more with scotches and American barrel-aged whiskeys and bourbons,” Johnson says.

At Cameron Mitchell Restaurants, based in Columbus, Ohio, with 26 units representing 13 dining concepts, there are two seasonal drink menus — fall/winter and spring/summer. “It is more realistic, given the number of concepts we have, to change it just twice,” says Ryan Valentine, Cameron Mitchell beverage director.

However, a few drinks at Cameron Mitchell eateries are updated more frequently. An example is the infused cocktail served in a vessel resembling a ship’s porthole at The Guild House, an American artisan restaurant. The formula changes monthly depending on the seasonal ingredients that are available.

One of the fall favorites of The Pearl, a polished tavern concept, is the Ginger Pumpkin Punch.   It is a combination of spiced rum, ginger mead, chai spice maple syrup and housemade pumpkin puree. At Cap City Fine Diner & Bar, there is a large following for the Cranberry Crush, made with vanilla vodka, fresh housemade cranberry puree and lemon.

“Bourbon and rye take center stage in fall and winter,” says Valentine. “But we have a lot of variety in primary spirits. You should use vodka, gin, Tennessee whiskey and cognac to make a menu diverse and interesting.”