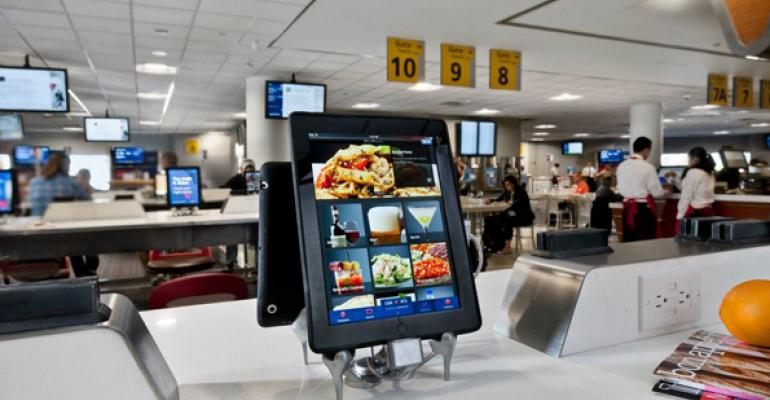 Their cool factor is nice, but touchscreen tablet computers prove to be big revenue generators in one real-world test.

Sure, offering tableside tablet technology gives customers something to talk about and instantly makes your restaurant seem contemporary and hip. But what’s the monetary payoff? How about a double-digit sales increase that comes without any prompting from your waitstaff?

That’s the result airport restaurant giant OTG Management achieved during an 18-month-long pilot program at restaurants it operates at New York City’s LaGuardia and JFK airports. The company, whose portfolio numbers 150 restaurants at 10 major airports, reports that customers who ordered by iPads spent 15-20 percent more than those customers who placed orders the traditional way.

Technology isn’t the only innovation OTG is using to breathe life into airport foodservice. The company is a pioneer in bringing local chef-driven concepts into airports. For example, Beard Award-winner Andrew Carmellini’s Croque Madame was one of the test restaurants at JFK. The iPad venture is part of OTG’s push to enhance the flying public’s airport “ground experience,” which frequent travelers will tell you could use some serious enhancing.

Results of the LaGuardia/JFK iPad test were strong enough to convince OTG to make a much bigger bet on the device. The company plans to deploy more than 7,000 third-generation iPads over the next 18 months. OTG currently has 300 iPads in use at LaGuardia and plans to add 2,000 more there. It will also install 2,500 at the Minneapolis-St. Paul International Airport, and another 2,500 will be put to work at Toronto’s Pearson International. The new devices will be installed both inside the company’s many restaurant concepts and in customer holding areas near gates.

Which is to say, once OTG got a look at the numbers from its initial test, it decided to make iPads a key part of its overall business plan.

"This is a unique deployment that has no precedent," Rick Blatstein, chief executive officer of OTG, said in a press release. "We're marrying culinary excellence at the airport with new media. We are giving travelers a one-of-a-kind experience by bringing great food and beverages from world-renowned chefs to the gate area. By combining cuisine with innovative seating and ordering technology, we are offering a truly unique airport travel experience.”

OTG operates in an environment that isn’t a pure play on the restaurant industry. So its experience may not be reproducible by you. On the other hand, this company made a big commitment to iPads and found it made money by doing so. That’s one thing restaurant operators who are on the fence about adding iPads or another touchscreen tablet system to their operation really want to know. They also wonder about the customer experience. Are guests—not just the relative minority of iPad aficionados—able to use the devices as OTG hopes?

Not a problem, Blatstein says. The learning curve is relatively nonexistent.  “Customers have embraced the iPad ordering immediately, like they’ve done it forever,” he says.

In fact, most customers soon feel right at home with the devices. Patrons “can customize their order, easily add chicken or shrimp or some side dish,” Blatstein tells Forbes. “And when they’re done, they can swipe their credit card without having to look around for their waiter or waitress.”

That latter point is another plus for iPads and similar devices. Tables should theoretically turn faster if customers can check themselves out when ready. It’s another factor of iPad/tablet use that could help boost revenue for busy operations. There are plenty of other factors to consider before you make an investment in a tablet device, but be aware that the early returns by this multi-concept operator made their iPad venture seem worthwhile.