This dining destination in Sunny Isles Beach, Fla., will serve Father’s Day brunch on June 17 with menu options like the Oxtail ‘n’ Eggs Benedict with housemade Hollandaise sauce and grated Parmesan cheese for $12.

As a special promotion, Gigi’s is offering a Father’s Day box of six cupcake flavors — Chocolate Cola, Rocky Road, Carrot Cake, Kentucky Bourbon Pie, Chocolate Salted Caramel and Peanut Butter Cup. The holiday box is available in-store and online and can be pre-ordered now through June 17 for $18.75. Gigi’s is based in Fort Worth, Texas, with nearly 100 locations.

Those celebrating the holiday can enjoy the quick-service operator’s line-up of cakes for the occasion, which includes two new treats: the Banner Cookie Cake and the Bowtie and Suspenders Cookie Cake. Both desserts feature a layer of a choice of ice cream sandwiched between two nine-inch chocolate-chip-cookie crusts sandwiching a layer of ice cream and decorated with icing and rainbow sprinkles. Also, through Father’s Day, the chain will offer customers a coupon for $3 off any cake valued at $15 or more. Baskin-Robbins is based in Canton, Mass., and has more than 7,900 units.

As a gift option for fathers, this St. Louis spot is selling a three-piece chocolate golf ball set for $14. The golf balls are made with milk chocolate, hazelnuts and caramelized puffed rice, and come with a tee.

During Father’s Day weekend, from June 15-17, Mimi’s Café will serve The Bromosa — a blend of beer and orange juice — and its 28-day-aged ribeye steak. As an added bonus, all dads dining out on June 17 will receive a discount offer: a free entrée with a second entrée purchase for a future meal through July 7. Mimi’s is based in Dallas and has more than 80 units.

Press Coffee has created a coffee blend dedicated to dads: The World’s Greatest Dad Blend — a 12-ounce bag of whole beans for $16, available to purchase at its locations and online through June 30. On Father’s Day, the café will also give away any size of its hot drip coffee to dads for free. Press Coffee has seven locations across Arizona.

Clinton Hall, a brewpub with five locations in New York City, the Bronx and Brooklyn, N.Y., will celebrate Father’s Day with its Dad Bod Burger deal — a signature classic burger with their newly-brewed IPA for $12.

Egg Shop, with two locations in New York City and Brooklyn, N.Y., has created a special sandwich for Father’s Day: the Brisket Baby, made with sliced brisket, red cabbage slaw, a sunny-side-up egg and barbecue sauce. The sandwich paired with a beer is priced at $20.

For Father’s Day, the casual-dining chain will offer a three-course meal priced at $59 per person. The prix-fixe menu will come with a choice of salad, a choice of entrée with a side of potato or vegetables and a choice of a dessert, like this double-chocolate mousse. Morton’s is based in Houston with over 75 units.

As a special treat for dads, the quick-service operator will offer them a free Old-Fashioned Sundae all day on June 17. Wienerschnitzel is based in Irvine, Calif., with over 300 units. 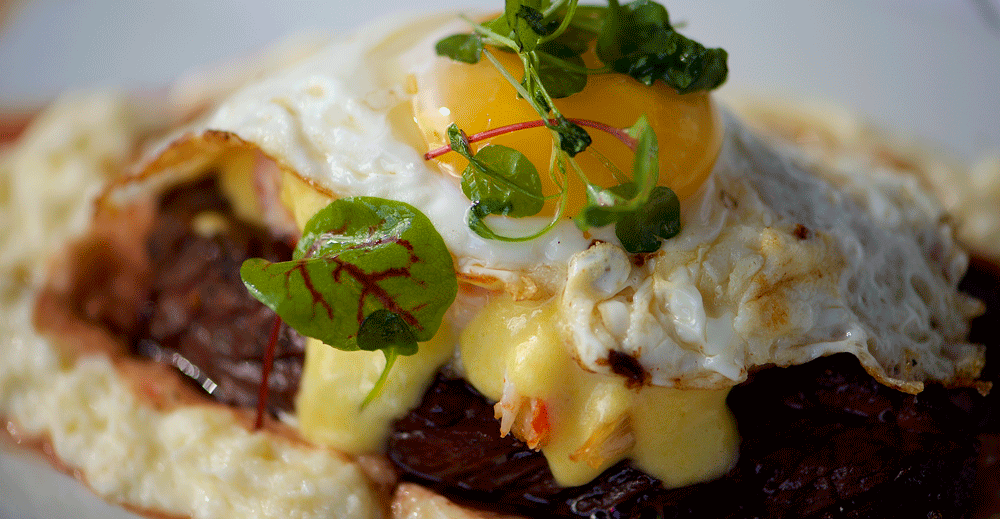