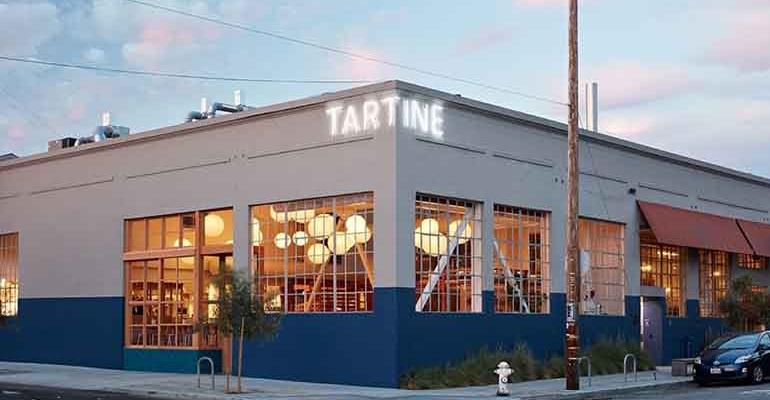 Loss of hours, benefits and pay disparities cited by employees looking for ‘seat at the table’

Workers at the San Francisco-born Tartine Bakery last week said they are forming a labor union with the goal of having “a seat at the table” to help the company better excel.

In a letter to management signed by 141 workers, the newly formed Tartine Union is aligning itself with the International Longshore and Warehouse Union, or ILWU. “With our union we will work to create a workplace that is collaborative and supportive while setting high standards for quality product, quality benefits, high morale and good wages,” the letter said. 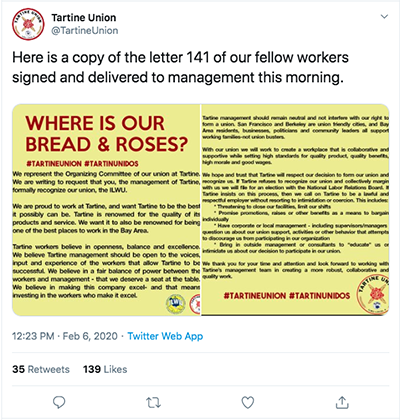 Launched by founders Elizabeth Prueitt and Chad Robertson in San Francisco, Tartine is now based in Los Angeles and includes 10 bakeries and cafes in the Bay Area, Southern California and South Korea. Tartine and the bakery complex known as Manufactory are known for their meticulous artisan breads and pastries.

The company reportedly last year closed part of its massive operation in Los Angeles after less than a year, laying off workers just before the holidays, though there were still plans to expand the Tartine brand in LA.

In the letter, the Tartine Union organizers said they would file a petition with the National Labor Relations Board if the union was not recognized by company management.

In media reports, workers complained about not getting enough hours, losing health care benefits and equity between front- and back-of-the-house workers.

On Monday, Tartine's owners responded with a letter to team members declining the union request and calling for workers to have a fair and supervised secret-ballot election on whether to form a union after hearing from management.

Concerned about “bullying” and misinformation on social media, along with threats of conflict, the owners noted that federal law allows for each employee to cast a vote on unionizing — and the right to change their minds if they already signed the earlier letter calling for a union.

“Several letter signers have told us they felt pressured to sign and never intended that their signing a union card would be used as the equivalent of a binding ‘vote’ to unionize Tartine before our opinions are shared with you and you were fully informed,” the letter from management said. “Sadly, in just a few days there is already some bullying and a lot of misinformation being spread on the internet and on social media about Tartine, your working conditions and most importantly, what can happen if we have a union at Tartine. This is an example of how the union and its supporters will attempt to tarnish Tartine’s reputation if they do not get what they want.

“This is incredibly unfair, and this approach is not good for our business and the security that comes with our continued success,” the letter continued.

The owners said they have hired a legal expert to educate workers on their rights and obligations, should they choose to form a union. The owners proposed a town hall meeting this week at each store to allow workers to ask questions.

“We know that many have characterized Tartine as some huge expanding company that does not value and cherish its people and its roots in San Francisco,” the owner wrote. “This cannot be further from the truth and we want a chance to respond to these mischaracterizations and falsehoods. We also are asking the ILWU to respect the right of every Tartine employee to become fully informed about the process before initiating any vote.”

Union activity in the restaurant industry is rare, particularly among independent restaurants. The 20-unit Little Big Burger, based in Portland, Ore., attempted to organize last year, but the effort did not win the needed vote from employees.

The Vancouver, Wash.-based Burgerville chain has a Burgerville Workers Union that advocates on behalf of workers there. Last year, workers in Portland went on strike to protest failed wage negotiations.

UPDATE: This story has been updated to include a response from Tartine's owners.

TAGS: Back of the House Operations
0 comments
Hide comments
Related