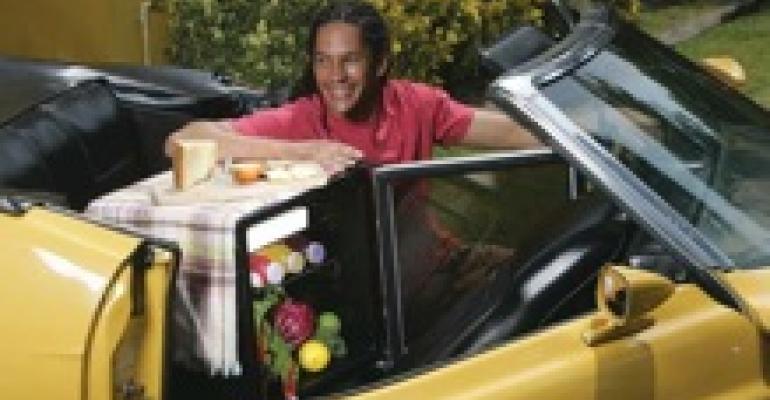 Life in the Fast Lane

Don't let those long dreads fool you. Govind Armstrong may have grown up in the heart of L.A.'s surf culture, but instead of hanging ten at the beach as a teen, he began a culinary career that took him through the kitchens of Wolfgang Puck, Mary Sue Milliken, Susan Feniger, Mark Peel, Nancy Silverton and Joachim Splichal. Today, he is the chef/owner of the highly regarded Table 8 in Los Angeles and Miami Beach. He is also working on a hotel project that will have him cooking in New York City next year. Govind is a 2004 RH Rising Star and was one of People magazine's "50 Most Beautiful People" in 2004. Nevertheless, he's consistently proven that he's more than just a pretty face.

A guy can get in trouble with a car like that.
I am a bit of a speed freak and I have had more than my share of speeding tickets. This is my third Mustang. I had a 1965, but this one has a bigger block engine and is in better shape.

Speed is not a bad idea when you have a restaurant on each coast and a third one planned for New York next year.
Yeah, I'm constantly on the move. It's led to a pretty hectic lifestyle.

Table 8 is the pefect concept for Los Angeles with its focus on seasonal, farm-fresh produce, but how's it holding up under the neon lights of South Beach?
It's doing really well. A lot of the restaurants there are into showy fusion cooking. But my approach is much more simple and ingredient-driven. It's different and people seem to like it.

You must be digging all that great Atlantic fish.
It's phenomenal. I get things like pink grouper, pompano and conch that just aren't available on the West coast.

Are you a madman taking on New York in light of your already full plate?
Maybe, but New York is only a two-hour flight from Miami. And my girlfriend, Tina, is from Virginia and has a home there.

Does she travel with you?
She's a screenwriter, so she can do that anywhere.

And, from the look of your mini fridge, you order pizza.
Yeah, that's from Mozza, Nancy Silverton and Mario Batali's new place. It's just down the street from me and they do amazing pizza.

You've got plenty to drink.
Yup, sauvignon blanc and lots of vitamin water.

There's also no shortage of fruits and veggies.
The produce here is amazing. The less you do to it, the better.

So, how weird was it to be named one of People magazine's 50 most beatiful people?
It was very weird. I thought a friend was pulling a prank when I got the call. I'm very shy, but it was flattering.

At least with wheels like that, the paparazzi won't catch you.

PHOTOGRAPHY BY TIM RUE/REDUX PLUS