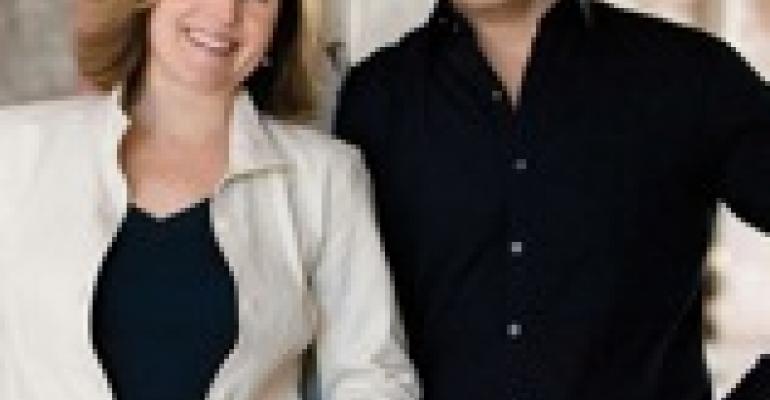 Gem of a Setting

The principals of Boston's Sapphire Restaurant Group—Michela Larson, Gary Sullivan and Karen Haskell—have opened just a handful of restaurants over the past two decades, but their ratio of restaurants created to culinary landmarks established is remarkably high.

First came the legendary Northern Italian fine dining spot Michela's, a Larson solo venture in its early days. That was followed by the equally legendary (and still going strong) Rialto, whose kitchen was and is headed by then-Sapphire partner Jody Adams. The edgier and more contemporary blu, located at The Sports Club/LA, another big hit, opened in 2001. In each instance, the Sapphire principals were acknowledged as trend-setting restaurant operators who knew how to produce a strong bottom line while blowing customers away. If you're looking for a group whose restaurants combine the soul and spirit of an independent restaurant with the operational expertise and fiscal discipline of a well-run chain, this is it.

Along the way, they've built a strong following, and they're going to need it at their new Rocca Kitchen& Bar, which opened in April. They're asking Bostonians to try a type of Italian cuisine they're probably not familiar with—Ligurian—and to venture into a little-known part of town to eat it.

About that location: Restaurant operators of Sapphire's stature usually gravitate to premier locations. Their new ventures might typically be found attached to the lobby of an upscale boutique hotel, on the ground floor of a big-ticket condo tower, anchoring a high-end retail venture or, if they do business where gambling is legal, just off the floor of a glitzy casino.

None of which describes Rocca's new home in the SoWa (South of Washington) neighborhood of Boston's South End. It's an urban enclave that probably will become gentrified one day, but isn't there yet. At the moment, artists inhabit the area's old factories and warehouses. So when Larson, Sullivan and Haskell opened their two-story, 200-seat Rocca this past April, it made a huge splash.

Right now, SoWa's street vibe is, well, a little edgy. But Larson has already proven she can thrive in this situation. Michela's opened in a similar neighborhood in 1985. East Cambridge was then politely described as "up and coming" and her restaurant had plenty of defunct factories for neighbors, just as Rocca's Harrison Avenue home does today. That location was no deterrent to someone with Larson's restaurant smarts. She did great business and earned national acclaim there, even uncovering some future restaurant greats—chef Todd English and restaurateur Christopher Myers (Radius, et al)—along the way.

"I loved that, being in territory that hadn't been developed before," Larson told the Boston Globe. "When this (Harrison Ave.) came up, I loved the idea of pushing the limits of the South End."

One thing that goes with Rocca's pioneering location is almost unthinkable by Boston restaurant standards: a 50-space parking lot immediately adjacent to the restaurant where customers can park for free—an unbeatable amenity in a neighborhood still rough around the edges.

Little, if anything, is rough about any aspect of Rocca. Each partner in The Sapphire Restaurant Group again demonstrates mastery of his or her particular specialty. Larson thinks up and oversees the concept, Sullivan is the front-of-the-house operations and wine guy and Haskell handles the business end. They're giving this one their full attention, having cut their business ties with both Rialto and blu. It's all or nothing at Rocca.

The food's inspiration has roots in Liguria, a region that's considered the Italian Riviera. "It's clean, clear and fresh, with grilled seafood, lots of herbs and plenty of greens and vegetables," Larson points out. "It's the way people eat today."

Ligurian is one of the lesser-known regional Italian cuisines, but might not be after Rocca chef Tom Fosnot (late of blu) get through with it. Larson, who opened Michela's with an ad that boldly proclaimed "No Red Sauce" is credited with getting Bostonians to think about Italian food in a new light at that restaurant. She's hoping to follow suit at Rocca, where the most expensive dish goes for $24.

Hip restaurants that open in up-and-coming areas are typically small and cozy, but Rocca is expansive by any standard. The space is divided into two levels. Arriving guests step into an area flooded with natural light that has a horseshoeshaped bar and views of Rocca's outdoor patio. The main dining room is located upstairs, as is a second, smaller bar.

It's the crown jewel of the neighborhood, that's for sure. Ever since word about Rocca got out other restaurateurs and retailers have begun to sign leases, and developers think Rocca will one day find itself an anchor of a new Restaurant Row.

In addition to operating restaurants, Sapphire Group's principals hire themselves out from time to time to consult on other projects. One look at Rocca and you'll know why other operators want to pick their brains.