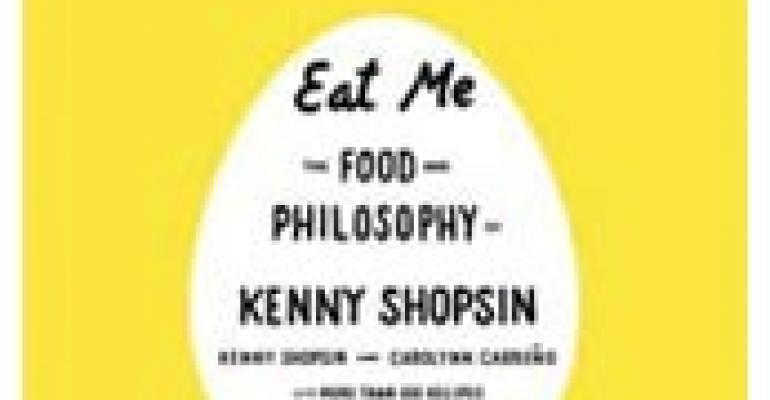 A Line Cook for the Ages

Don't be put off by chef/owner Kenny Shopsin's reputation as a New York nut job whose don't-break-my-rules approach to hospitality creates a dining ambience rivaling that of the Soup Nazi. He's also a savvy operator whose 40-seat full-service restaurant, Shopsin's General Store, has thrived in NYC's Greenwich Village since 1973. If you run a family-owned restaurant, you could do well to emulate this guy's thinking.

And there's plenty of the extravagantly-opinionated Shopsin's thinking on display in his book, Eat Me: The Food and Philosophy of Kenny Shopsin; Knopf, $24.95.

Of course, your food better be pretty darn good if you want to make a living while having a prickly attitude. It is at Shopsin's, and its creator goes to great lengths in this book to explain how it's done. He shuns most current trends.

“I don't subscribe to some intellectual school of thinking where I care about the provenance of every ingredient I'm cooking with and where every single component of a dish has to be made with the utmost integrity,” he says. “I don't use fancy cooking techniques or expensive equipment. The base of my cooking philosophy is to get the job done with as few ingredients, as little effort, and in as short a time as possible.”

So does he have any signature items? Oh yeah, hundreds of them. They're plastered all over his 900-item — you're reading that right — menu. How's he do it? Shopsin relies on rock-solid short-order cooking technique for one thing, and you may rethink the way you prepare many of your common items after you read how and why Shopsin does his. It's one area in which his being a curmudgeon and stickler really helps the end product.

But his real culinary calling card is a sense of eclectic improvisation on the basics. Some items are so simple you'll wonder why you didn't think of them first. He serves gazpacho salad in the months chilled gazpacho soup no longer makes sense. His Taco-fried chicken — bread the chicken in crushed tortilla chips, then top with Buffalo wing sauce — would sell like hotcakes in almost any restaurant. Don't miss the beverage chapter, “Selling Water, or the Secret of the Restaurant Business.” It's a template for keeping margins high in the current value environment.

There are more than 100 dandy recipes here, but another reason to buy this book is that it speaks so directly to anyone who works in the business. Shopsin simply loves the nuts and bolts of restaurant work. “I never had a goal to make more money so that I could retire or so that I could hire a low-wage employee to do the cooking for me,” he says. “I have no desire to open a second restaurant, to oversee a restaurant empire with my name on it, or to endorse a line of pots and pans.”

It's a philosophy many RH readers may be eager to adopt. Shopsin's book is a fine read, on more than one level.

Who better to put a contemporary spin on sustainable cuisine than the people who teach at this Vermont-based school? NECI sits amidst the working farms of the nation's finest artisanal suppliers, and it draws on both those ingredients and its extensive recipe database to come up with more than 200 dishes detailed in this book. The result: a wide range of delicious seasonal fare, most of it having a distinctive New England bent. Reproducing these recipes will be easy, because they've been honed and polished by one of the 90 chefs who've taught them to NECI students. But the school suggests you use them as starting points instead, heading to your local farmer's market yourself before deciding exactly how you'll prepare your dish. Either approach will give you tasty results.

They're delicious, cheap, abundant, healthful and add color to almost any dish. Yet fresh grapes don't get much play in full-service restaurants beyond their use in a classic French entree like sole Veronique and their frequent appearance as a garnish. That could change when the industry gets its hands on this 132-page book, which offers dozens of up-to-the-minute recipes that incorporate grapes into sophisticated recipes whose end products look and taste delicious. You'll find yourself wondering why you've overlooked this plentiful fruit for so long.