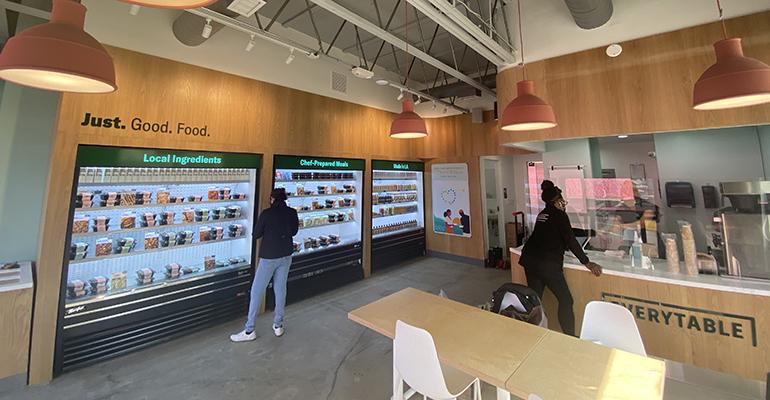 Dorcia Whitebrake talks about her experience making the leap from a general manager at Everytable to opening her first Everytable restaurant in December.
Operations>Limited Service

Nearly one year after announcing a $2.5 million investment from the Annenberg Foundation and the California Wellness Foundation that would go toward recruiting franchisees of color from underserved areas, Los Angeles-based restaurant chain and social enterprise Everytable named its first social equity franchisee in December. Dorcia Whitebrake — a general manager at Everytable, South Los Angeles resident and Black mother of three — opened her first Everytable store at the beginning of January.

When she joined Everytable 18 months ago, it was Whitebrake’s first foray into the foodservice business. But she has always had a passion for promoting food and nutrition equity. Before joining the company, she graduated from and served as a board member for Everytable CEO Sam Polk’s nonprofit FEAST (Food Education Access Support Together) that highlights and supports people that fights food injustice and promotes wellness in communities of need.

“I knew Everytable dealt with food justice and helping people with food insecurities and I was thinking, ‘this is something I could get into,’” Whitebrake said.

Everytable, which launched in 2015 in Los Angeles is a grab-and-go restaurant with a variable pricing structure based on the needs and income insecurities of the communities where they serve. With Whitebrake’s store now open, Everytable currently has seven locations.

“I have always been a person to try to help other people, but I was completely floored when […] they said they wanted me to be the first social equity franchisee,” she said. “I probably cried.”

Whitebrake and future franchisees receive access to the capital needed to run their business after completing a university program that trains them to become successful entrepreneurs. Franchisees are also encouraged to add their own ideas to their restaurants. At Whitebrake’s location in Hollywood for example, her store offers Everytable’s first full-service coffee program in partnership with Black-owned Hot & Cool Café, which serves Crenshaw Coffee. Her location is also decorated with original artwork by Los Angeles-based artist, Ke’Ari Brooks.

While Whitebrake is the company’s first social equity franchisee, Everytable is looking to get aggressive with recruiting similar entrepreneurial-minded people of color for their next locations. Executive director of social equity franchising Bryce Fluellen said they would be opening the application process to internal employees and external interested parties by the end of the month or early February.

Everytable plans to open 40 new restaurants in Los Angeles County over the next two years, with hopes of garnering seven more franchise-owned store contracts by March. Most of their growth over the next several years will come from the social equity franchisee program, Fluellen said, with just a few corporate stores in the works.

To kick off the program, Whitebrake was an easy first choice, Fluellen said, as Everytable begins the process of expanding their operation through conscientious equity of opportunity:

“She just embodies hard work and resiliency,” he said. “She started with Feast and from there became a store manager. She cares about her community, and even before she joined us, she had her own event planning business and was pursuing two Associates degrees.”

For Whitebrake, this store is more than just a business opportunity: it’s the start of a much-needed boost for the Black entrepreneurial community in Los Angeles.

“We need this type of program because we have so many people who want to do something like this but don’t have the means to be able to open a store who may not ever qualify for a loan because they don’t have the collateral,” she said. “This is going to change lives.”

So, what’s next for Whitebrake? She’s not just stopping at one store.

“I would love to own more than one Everytable,” she said. “I’m hoping my children will get involved as well.”

Watch our video interview with Whitebrake for more insight.