Concept(s): The food hall operated by Concept Entertainment — that owns and operates Thirsty Lion Gastropub & Grill in Texas — founder John Plew and corporate executive chef/partner Keith Castro wanted to create a rotating virtual food hall that would allow customers to mix-and-match cuisines from across the world in one delivery order. Previously, the pair opened a food hall in Oregon that was in-person, but this is the group’s first virtual food hall.

Killer Wings: The brand offers all things wings with a variety of flavors and combinations.

Southern Jewel: Traditional southern classics with some “Texas heat” made from scratch daily.

Price:  Sandwiches and entrees range from $8.95 to $21.95 for a platter of Nashville Hot Chicken.

Concept(s): Classic Italian food in a delivery-forward way meant to bring the nostalgia of the classic New York Italian restaurant at-home. The menu was created by ​Chef Ralph Scamardella​, who serves as partner and chef of Tao Group Hospitality.

Operated by: Ning (Amelie) Kang and Yishu He, owners and partners of MáLà Project, and Lee Burger

Concept(s): This virtual cocktail bar is trying to bring the night-out experience to those remaining safely at home. In individually sealed and mixed bottles, with instructions to either pour over ice at room temp or keep chilled on the front, NYC residents below 66th street can get their favorite cocktails delivered to their homes.

Menu: Classic cocktails like the Negroni, Old Fashioned, Sazerac, the Manhattan, Cosmo and an espresso martini all come pre-packaged in clear glass bottles reminiscent of a high-end green juice. Most of the specialty cocktails like the instant hot toddy, lychee martini, dragon fruit daquiri and long-est island (their version if a Long Island iced tea) come with accoutrements like rosemary and lemon for an added cocktail experience.

Operated by: The Rooftop Lounge

Concept(s): “It was important for us to create new ways to connect with our loyal customers until we can once again invite them back to our rooftop to dine in-person. Our hope is that the community will embrace the new editions and enjoy the diverse variety of fare that each of these new and exciting restaurants has to offer,” said Spencer Kushner, The Rooftop Lounge’s director of food and beverage.

Menu: One of the brand’s most popular items, Onigiri (Japanese rice balls), is offered in a variety of creative flavor combinations such as Yuzu Salmon with Opan Basil and Ume Shiso-- pickled plum steeped in agave and shiso leaf. Donburi rice bowls and deep-fried Inari sushi round out the rest of this menu.

Concept(s): Hollywood Crab Shack joins already-existing virtual brands in the food hall including Pop!s Burgers & Shakes, Azule Taqueria, Supertoro and Street Noods and serves as the fresh seafood option for customers who want crab in and out of the shell delivered.

Menu: Crab by the half-pound bagged is offered ranging from Dungeness to King to Stone to Blue along with half-pound bags of shrimp, crawfish, clams, mussels and lobster available mild, medium and spicy. Sides include half-pound orders of potatoes, andouille sausage, calamari, corn, crusty bread, white rice and fries.

Price: Not yet released

Concept(s): From the founder of Mexicue, the delivery-only pop-up is a version of Blake Lane the brick-and-mortar restaurant that was previously located on the Upper East Side of Manhattan. Re-launched as a virtual brand with just two chefs making healthy-ish neighborhood fare made from scratch.

Livy’s Plant Based Foods: This concept is named for Garces’ own vegan daughter Olivia and only sells vegan food. The concept mainly uses Impossible patties and products for the vegan burger restaurant.

“The exploration of cooking plant-based foods has led me to believe that we really don’t ‘need’ to have meat to have amazing flavors and culinary experiences,” Garces said.

Menu: Livy’s Plant Based Foods: Impossible Foods’ Impossible Burger, made with soy and potato proteins, as well as a black bean-and-soy soyrizo burger, starting at $8. Guests can choose either one and customize their food by selecting a Martin’s seeded roll (which is not vegan because it contains milk powder), a vegan bun, a gluten-free bun or a Bibb lettuce wrap. They can also select from among five different cheese substitutes meant to simulate white cheddar, feta, smoked Gouda, Parmesan and Cheese Whiz for $2 each.

Price: Livy’s Plant Based Foods charges $8 for burgers with optional additions for a fee and sides cost between $6 and $10.

Operated by: Robert Sulatycky, a veteran of Bocuse d’Or culinary competitions and former executive chef at the Four Seasons Hotels in Toronto and Chicago and co-founder Paul Abramowitz, a self-described serial entrepreneur

Delivery: Tock or via phone

Menu: Entrées include USDA Prime beef cuts ranging from a 10-ounce filet mignon for $69 at the low end to the 39-ounce cowboy ribeye for $139 at the high end, along with a handful of poultry and seafood selections, a range of side dishes and Regis Ova Caviar

Concept(s): This barbecue concept is all about smoked meats and sauces. Large portions are common on the delivery-only menu meant to be enjoyed family-style.

“The lightbulb went on for us when we realized that we could create a virtual brand that could live online, but that we could execute from our existing kitchens. After crunching a lot of numbers and considering logistics, we decided this could really work and could likely even thrive in today’s on-demand, carryout/delivery-driven environment,” said Angela Zoiss, chief marketing officer for Bottleneck Management, in a statement. 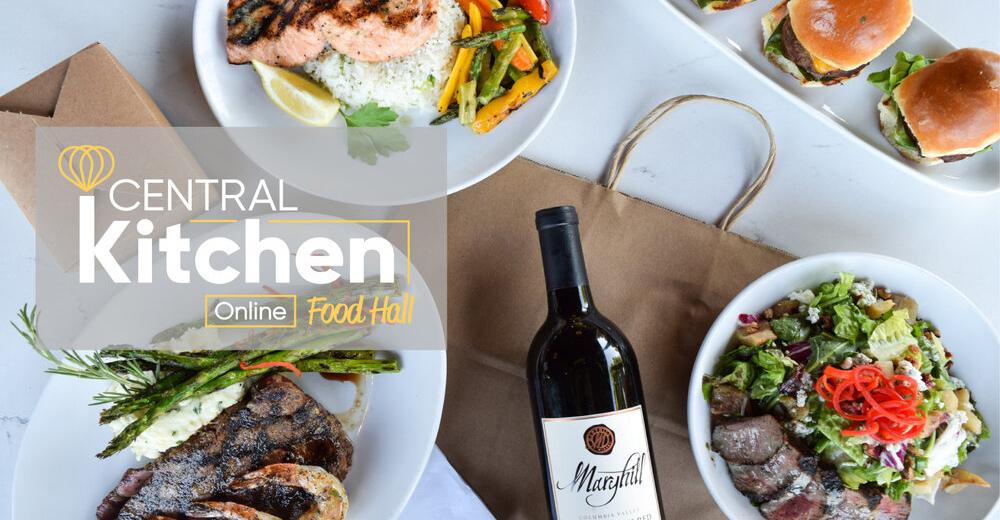 Next Up
Seafood is a draw during Lent, even during a pandemic
Start Slideshow ›