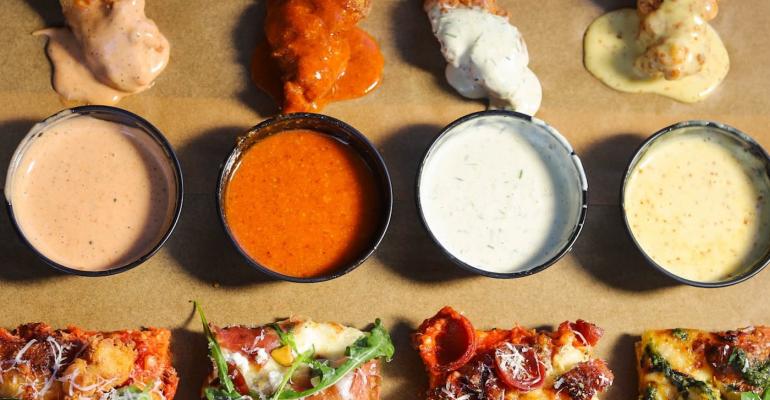 Fox Restaurant Concepts, now a subsidiary of The Cheesecake Factory Inc., is launching one new takeout-only restaurant concept, Fly Bye To Go, and a takeout-only version of its fast-casual Flower Child.

Company founder Sam Fox plans to open Fly Bye To Go on Dec. 9 in Phoenix, Ariz., and the Flower Child offshoot in 2021 in Tempe, Ariz.

Related: 5 things to know about the Cheesecake Factory-Fox Restaurant merger

The company, in a news release, said Fly Bye will be serving Detroit-style pizza and fried chicken.

“Fly Bye keeps it crispy with buttermilk-dipped, hand-breaded wonderfully crunchy chicken tenders (so you can stop pretending that kid’s meal isn’t for you),” the company said.

The tenders will be served with a selection of 10 sauces for dipping, ranging from an Asian-inspired version to cheese fondue that’s a signature at sibling concept Culinary Dropout.

Other items will include wings, mozzarella sticks and pizza.

“We spent a lot of time getting the dough just right,” Fox said in a statement. “When you bite into this pizza the crust is airy, the center is cheesy and the edges are perfectly crunchy.”

Fly Bye will operate out of the company’s “The Yard” complex, occupying the former Little Cleo’s space next to Culinary Dropout. Little Cleo was a Fox seafood restaurant that closed in 2018.

Customers will be able to order Fly Bye food online and pick it up at the location or have it delivered through a third-party smartphone service.

The company also confirmed it will be opening its first takeout-only Flower Child, which has been until now a fast-casual concept, in Tempe, Ariz., in 2021. Flower Child has 26 locations in 11 states.

Calabasas Hills, Calif.-based Cheesecake Factory Inc., after earlier investments in North Italia and Flower Child, acquired the remaining interest in the company in 2019.