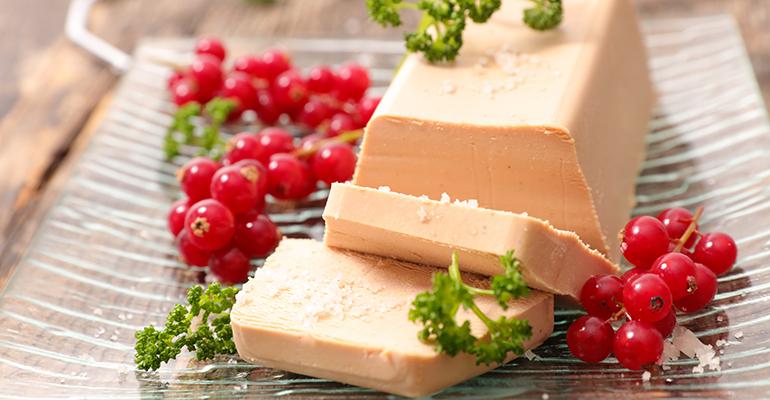 At the Sept. 12 protest, restaurant operators defended the culinary benefits of foie gras and producers threatened that a citywide ban would harm foie gras farms in New York, which are two of the three national producers.

Luis Alvarez, chairman of the Sullivan County legislature representing the New York county where both farms are located, questioned the fixation on foie gras, a relatively small industry, saying the city could be focusing on large poultry, beef or pig farms.

In January, legislation was introduced to ban the sale and profit from foie gras, including the appearance on restaurant menus in the city, punishable with a fine of up to $1,000 or up to one year in prison.

“I like upscale dining as much as the next person," said city council member Carlina Rivera, when introducing the bill in January. "But this is egregious cruelty that is outside the bounds of acceptable conduct in our society, and that should include the force feeding of birds to cause their livers to expand 10 times their normal size, all for a luxury project-product that is sold in less than 1% of New York restaurants."

Supporters of the bill flocked to city hall in June to voice support for the ban in public hearings.

More than half the council has signed onto the bill and New York City’s mayor and presidential candidate Bill de Blasio has signaled he will back the ban, should it come up for a vote.

Foie gras is produced when ducks are force fed for roughly three weeks when they’ve reached about 10 or 11 weeks in age, up to three times a day, to fatten their livers, using a process called gavage. Desired for the purity of the fat, foie gras, or fatty liver in French, idealizes the largest liver which detractors say is achieved through inhumane practices like tube-feeding.

LaBelle Farms in upstate New York is one of the three national producers of foie gras and they slaughter 3,000 ducks per week. New York City accounts for about one third of their $10 million business, which employs roughly 100 people.

“Foie gras is the low-hanging fruit right now,” said Sergio Saravia one of the founders of LaBelle Farms. It’s an easy product to focus on, even though chickens are more inhumanely treated on a broader scale, he added.

Saravia said the “propaganda” videos that come from other countries, like Ukraine and Hungary where foie gras is produced, have colored consumers’ minds.

At LaBelle Farms, however, there are no cages, the pens are open and the ducks are raised out in the open until 11 weeks when they go into the pens for hand feeding. According to Saravia, the feeding by hand occurs when the ducks are naturally meant to gorge at around the time they would migrate.

As of this week, no one from the council who supports the ban has come to LaBelle Farms.

“That is legislation without education,” said Saravia.

New York is not the first major U.S. city to try this. Chicago banned foie gras in 2006, but the ban was overturned shortly after it was passed.

California had more luck passing the ban on the state level, originally in 2004 and enacted in 2012. California prohibits the production as well as the sale of any product produced by force feeding birds.

The California ban was overturned in 2015 and in 2017, the law was put back in place. In 2019, the California Supreme Court refused to hear the case, upholding the institution of the ban.

But in California, chefs have also fought back.

Last month, a lawsuit involving the California restaurant La Toque was dismissed, ending a six-year legal battle, in which the chef was accused of subverting the law by giving foie gras away as part of a tasting menu.

A statewide ban for New York has been brought up several times and never voted on.

Saravia has a message for those who oppose foie gras: “Come visit, that’s all I have to say.”

Both the Humane Society and the Animal Legal Defense Fund didn't respond to requests for comment.

José Andrés’ ThinkFoodGroup and Central Michel Richard are the latest restaurants to sue their insurance company over COVID-19 coverage
Jul 30, 2020

Senate Republicans propose $1T ‘HEALS Act’ with another round of stimulus checks and $190B more in Paycheck Protection Program funding
Jul 28, 2020