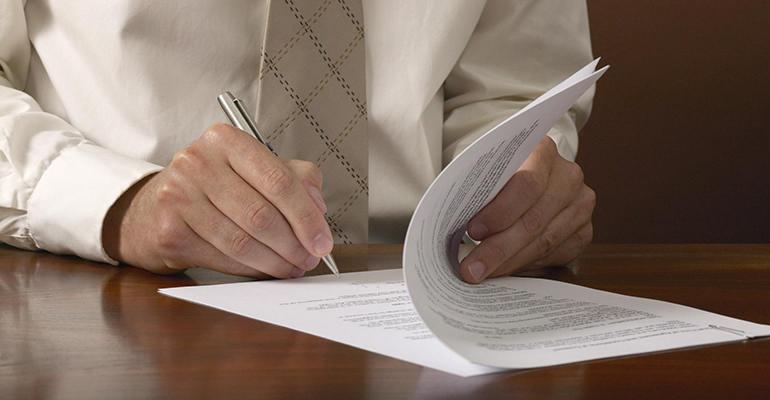 Richard Drury / Stone / Getty Images
The Act of God clause gets a citation in major win for businesses.
Operations>Legal

The Northern District of Illinois U.S. Bankruptcy Court has ruled to excuse Giglio’s Street Tavern in Chicago from paying 75% of its rent during the coronavirus crisis, citing the Force Majeure or “Act of God” clause in the restaurant’s contract with its landlord. The restaurant — under the restaurant group Hitz Restaurant Group — previously filed for bankruptcy on February 24, before nationwide COVID-19-related lockdowns were put in place.

According to the memorandum filed by the court on June 3, the restaurant’s contract with its landlord specifically stated that, “the landlord and tenant shall each be excused from performing its obligations or undertakings provided in this lease […] so long as the performance of any of its obligations are prevented or delayed, retarded or hindered by. . . laws, governmental action or inaction, orders of government…”

Although the Force Majeure clause specifically states that it does not apply if the landlord is pleading exemption due to “lack of money,” Hitz Restaurant Group said it was not making the claim of not having enough money to pay the rent, but argued that the Act of God defense was put into place on March 16, when Gov. Pritzker issued an executive order shutting down the state, including restaurants.

While the court judge ruled that Force Majeure applied in this instance, Giglio’s Street Tavern was not let off the hook entirely. The judge ruled that while the executive order “hindered” the restaurant’s ability to do business, it did not inhibit it entirely because the restaurant could have instituted takeout, curbside pickup and/or delivery services instead of relying on in-house dining. Additionally, even though Hitz Restaurant Group argued that they were disallowed from using 75% of their property since March (the dining room and bar areas), they still would have been able to use 25% of their property (the kitchen area) to prepare food for delivery and takeout customers.

“The court preliminarily interprets the debtor’s estimation as an admission that it owes at least 25 percent of the rental payments for April, May, and June 2020,” the memorandum states. “Monthly rental payments due thereafter are likely to increase as the government’s shut-down restrictions are gradually lifted. Therefore, the court concludes that debtor still owes at least 25% of the rent amount to Creditor even after the Force Majeure clause.”

Giglio’s Street Tavern and Kaas Management Services — the defendant — did not respond in time to request for further comment on the court decision.

Throughout the pandemic, the Act of God clause has been cited by lawyers as a possible defense for business owners to make insurance claims if their restaurants were shut down during the pandemic. It has not been yet made clear if Force Majeure can be applied in the many pending lawsuits restaurants have filed against insurance companies.