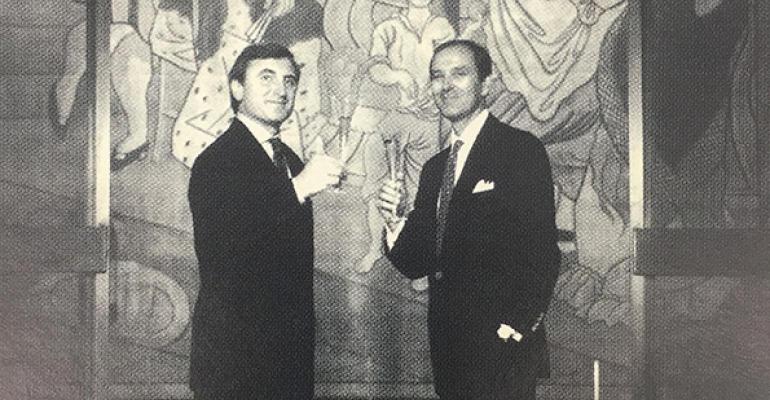 The Four Seasons restaurant brand is for sale

Offers for the storied New York City concept's intellectual property are due Feb. 25

The fine-dining restaurant brand The Four Seasons is officially for sale.

Hilco Steambank on Thursday announced it is marketing the Four Seasons brand and related intellectual property. Offers are due on Feb. 25, and assets include the Four Seasons trademark, a trademark for Spa Cuisine prepared food and various social media assets, along with the iconic four-tree logo.

The restaurant that first opened in 1959 in New York City's Seagram building has a rich history. For five decades, it was the power lunch spot for the elite. The brainchild of legendary restaurateur Joe Baum, it pioneered the notion of serving local, seasonal cuisine, introducing ingredients like cherry tomatoes, snow peas and baby avocados.  It is among “Ten Restaurants That Changed America,” a 2016 book by Yale University historian Paul Freedman.

But The Four Seasons closed in the Seagram building in 2016 after 57 years. An investor group later reopened the concept in another spot three blocks away — only to close for good in 2019 after less than a year in operation following a negative review from The New York Times.

Related: The Four Seasons to close; but Pastis has reopened

There were also allegations of misconduct among partners at the time and reports indicated co-owner Julian Niccolini was forced to resign.

The Four Seasons managing partner Alex von Bidder at the time told The New York Times, “We just couldn’t make it. The restaurant world had changed. We were not doing enough business to satisfy [the investors].”

Restaurants could be violating WARN Act – here's what you need to know
Sep 23, 2020

Will Congress come to the aid of the restaurant industry?
Sep 18, 2020